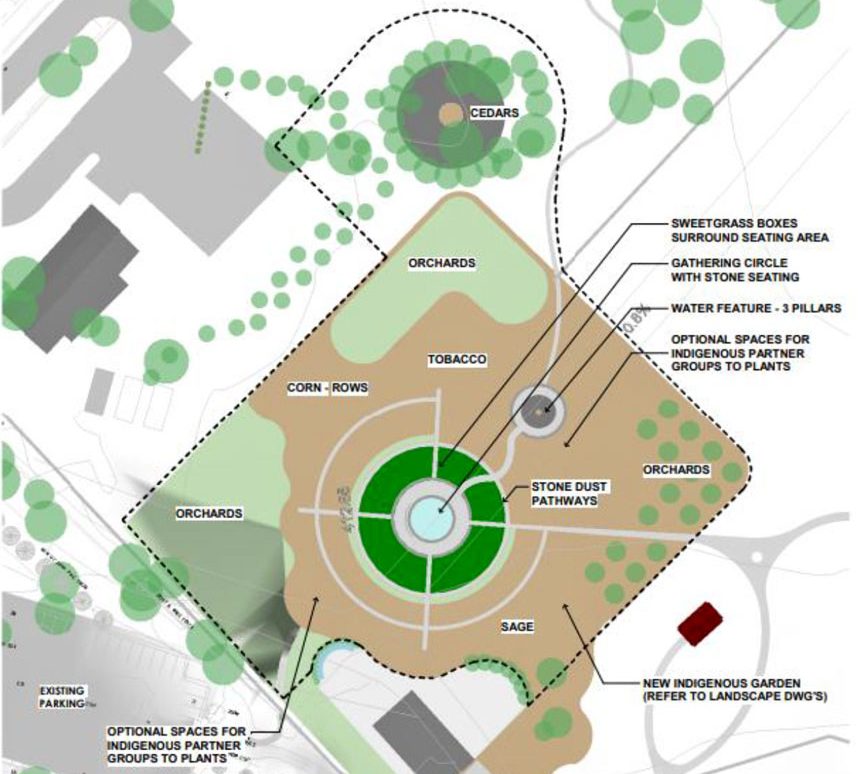 Plans for an Indigenous Gathering Circle, to be located at the county museum and archives, were presented to Wellington County council at its June 30 meeting. Council agenda image

GUELPH – County council has approved an increased capital budget for several projects at the Wellington County Museum and Archives (WCMA).

A total of five capital projects are budgeted and targeted for construction at the WCMA in 2022.

The report indicates the projects have been re-tendered with a closing date of July 6.

“Some of our funding allocations may have not been generous enough, or capable of handling the scope of work which we were putting out there,” councillor Mary Lloyd explained to Wellington County council members on June 30.

“We’re also a little disappointed that by our deadline we had not received any tenders … but being we have been assured that since this has been re-tendered and specifically gone to some pre-qualified general contractors that we’ve worked with in the past, we are hopeful that will work with the RFP submission deadline that was moved into July.”

The original budget for the three projects totals $550,000.

“To ensure the completion of these projects this year, staff are recommending to increase the budget to $650,000 to better accommodate post-pandemic cost increases,” Burns states in the report.

The projects are funded from the county’s property reserve and the general capital reserve.

Designs and cost estimates for a planned Indigenous Gathering Circle and playground at the museum and archives property were also included in the report.

The Indigenous Gathering Circle would be the county’s first dedicated Indigenous space for healing, ceremony and learning.

The cost estimate for the space, inclusive of a water feature and access road is $250,000, which is the original budgeted amount, Burns states in the report.

The WMCA playground design incorporates the ideas of the museum’s youth residents, as well as the project team, which includes the Wellington Place Child Care Centre manager, Kathy Klaver and museum staff.

Elements of climbing, sliding, balancing, jumping and swinging are included, as are transitions, and areas for interpretive play.

“Overall, the theme of agriculture is integrated to ensure the playground reflects the look and character of the Poor House Industrial Farm,” the report states. 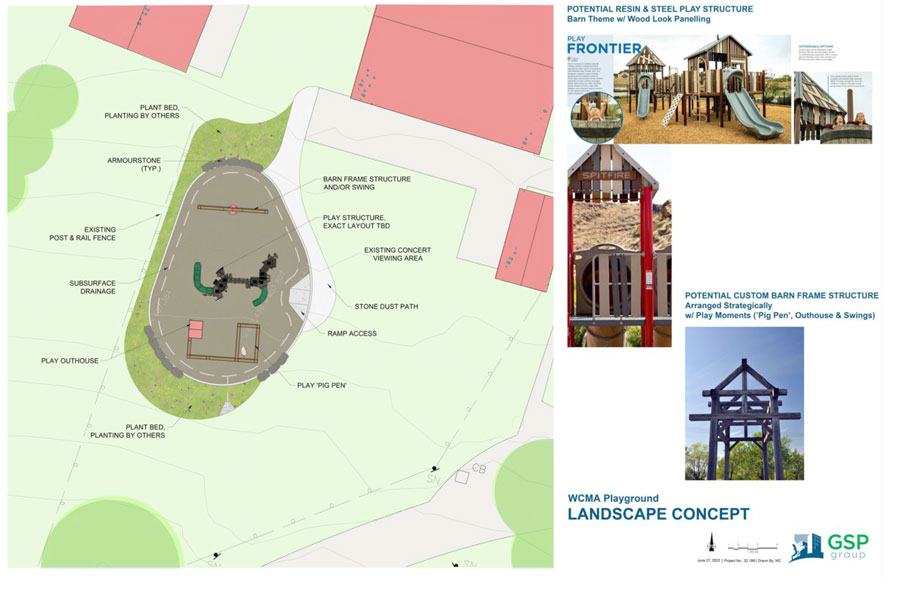 County council approved a capital budget increase for several projects, including a playground at the Wellington County Museum and Archives at its June 30 meeting. Council agenda image

Councillor Steve O’Neil questioned idea of locating a playground at the museum.

“When you go to most playgrounds, people want to, as families, walk to the playground,” said O’Neil.

“I don’t see putting a playground at the museum as a place where families are going to walk to. It’s a busy road, there’s literally no housing around it, so I wonder if we’re going to get our money’s worth.”

“I agree that it’s not the handiest place, I suppose, to walk to from a lot of residences,” said councillor Doug Breen.

However, Breen noted, “I grew up on a farm and we had lots of room to ride around on dirt bikes, and ride horses and do all kinds of things that kids did out in the country. Then when I started raising kids in … the village of Rockwood, I found that it didn’t have those things at my disposal.

“And those playgrounds became very, very important, to the point that we would literally sometimes get in a car with my two kids and go to a playground just to give them a different experience than the one at the end of the street.”

Lloyd said she often sees “families traveling in three generations where you are seeing grandma and grandpa want to go and learn about that history, mom and dad are trying to race around to protect their children from touching things that are very delicate and not supposed to be touched or moved.

“And this (the playground) gives an opportunity for a three-generation family to go and experience history in a way that’s hands on, it’s active, it’s involved.”

Lloyd added, “When we’re also investing in our Indigenous circle, we have to remember that there are going to be people of all ages, again, visiting for different reasons.

“And if we have things there for children to do outdoors, it may allow the elders and their families to have that quiet peaceful time in the garden, where they’re experiencing what they’ve come to experience and a place for the kids to go and burn off a little bit of energy.”

Council received the report and approved the expenditures for the work on the museum barn, mezzanine and roof, and the Indigenous Gathering Circle.

In a separate motion, council approved the recommended playground expenditure.