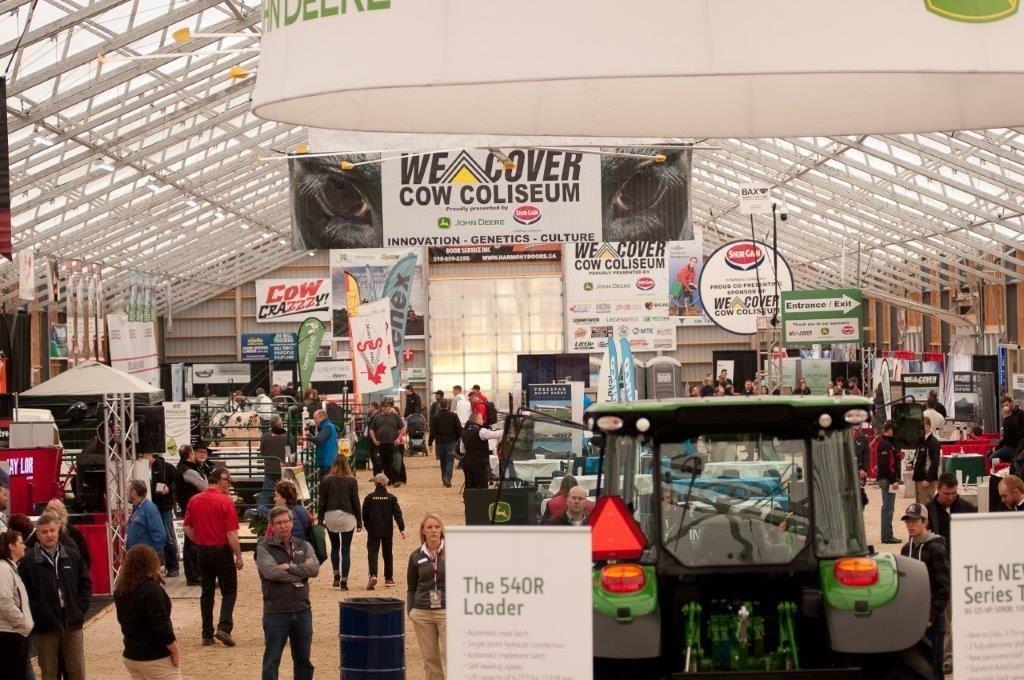 CDX - More than 16,000 people are expected to pass through the Canadian Dairy XPO over the course of the two-day event on April 3 and 4. It will feature over 350 exhibitors. Submitted photo

STRATFORD – The Canadian Dairy XPO is returning to the Stratford Rotary Complex for its seventh year on April 3 and 4.

Organizers of this year’s event expect more than 16,000 people to pass through the CDX over the course of the two-day event.

“The approach is always the same: to generate new innovation from around the world to expose it to Canadian dairy producers,” explained XPO general manager Jordon Underhill.

The show continues to grow every year, he added.

The event will feature over 350 exhibitors. Companies from over 40 different countries will attend this year’s expo, an increase over the 30 seen in past years.

And with a focus on innovation, there is always something new to see at the XPO.

Displays this year will include everything from milking robots to automated foot baths to even laser guided condition scoring of cattle.

“So there will be a number of innovation launches for the North American market, not just the Canadian market, by these companies that are coming from across the world,” Underhill added.

It far exceeds the original vision set out by Underhill and others when they devel­oped the first XPO in  2013.

“We saw a need in the marketplace to have a national dairy event that brought together industry and producers from across the country to learn from each other,” he said.

It’s an opportunity, Underhill said, that is becoming more and more rare.

“We see the size of the operations growing so every­ body is extremely busy, they don’t want industry stopping in at the farm because they are too busy and farmers are doing less visiting between each other because of bio security,” Underhill said.

Stratford was the obvious choice.

According to Underhill, Stratford and the two-hour radius surrounding Stratford has the highest concentra­tion of commercial dairy production in the country (in terms of number of cows and volume of milk).

A major consideration when choosing Stratford was its proximity to the larg­est amount of farms possible.

“Dairy farmers are super sensitive to timing, especially if they have to get back to milk cows,” said Underhill.

“So a city location is less attractive in that there is a risk that you get stuck in traffic and don’t get home when you need to.

Another major consider­ation was the ability to con­trol the food at the Stratford Rotary Complex. Many city venues Underhill and others considered had food service contracts.

“We wanted to serve the actual commodity,” he said.

“They are taking the funds and utiliz­ing them for their educa­tional program and the county displays that they have when they go to fairs and different events.”

There will be over 70 companies looking to hire participating in the “resume blitz” this year. The blitz was introduced at the XPO last year with approximately 30 companies represented.

The blitz, which will take place on the second day, allows people to drop off resumes and talk to company representatives.

Education is another key component of the annual XPO.

However, Underhill said organizers try to keep the educational program pretty light as there is a variety of reasons producers come to the show.

Instead of diving into specific topics like calf care or reproduction, the education­al portion “zooms out” and more so emphasizes the busi­ness perspective of running a dairy farm.

“What we are trying to do is to get dairy farmers thinking, yes you are a dairy farmer but you are also the CEO of a large corporation,” Underhill explained.

This year’s keynote speaker, Sami Jo Small, a three-time Olympian and five-time World Champion, will start off each day.

Small co-found­ed the Canadian Women’s Hockey League and plays for the Toronto Furies. Although not from the dairy sector, Small will offer insights into team building.

For more information, plus a map of the XPO grounds, visit dairyxpo.ca.