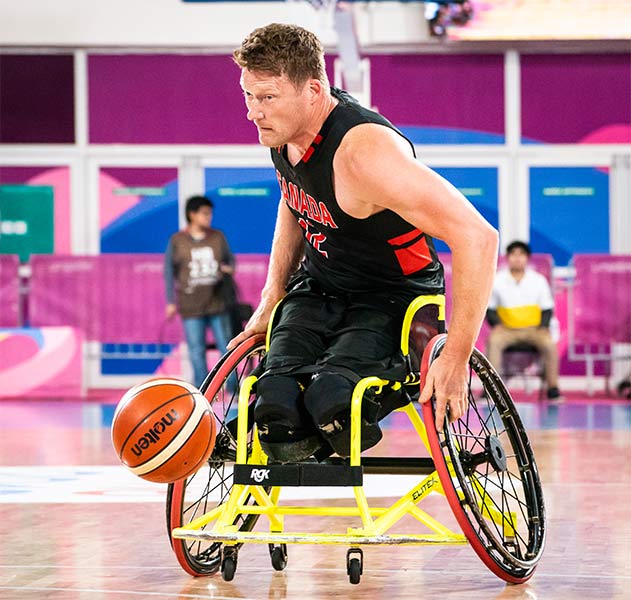 Tough game - Patrick Anderson of Fergus chases a loose ball as Canada took on the US in the gold medal game in wheelchair basketball at the Parapan Am Games in Lima, Peru on Aug. 31.
Photo by Dave Holland

LIMA, PERU – The Canadian men’s wheelchair basketball team was undefeated going into the gold medal final of the 2019 Parapan American Games, but they are coming home with silver medals.

They lost 76-43 to the Americans on Aug. 31, but have met their goal of qualifying for the Tokyo 2020 Paralympics.

“Losing hurts,” said Patrick Anderson of Fergus, a veteran who normally scores more than 20 points per game, but was held to 11 by the US.

They finished the tournament with an unblemished 5-0 record and will also go to Tokyo.

The Canadian men had defeated Columbia 62-42 to win a berth in the final.

They struggled to find their offensive flair early against the USA, shooting merely 27% from the field compared to the USA who hit 32 of 66 (48%).

Canada managed to connect on just one of their first 10 attempts, and their opponent leveraged the chance to quickly take a 14-4 lead by midway through the first quarter.

The USA out scored Canada 26-9 in the third quarter, effectively putting things out of reach for Canada, and cruised to the victory.

The Canadian quest to finish in the top three began with a 64-51 win over Colombia in their first game.

Anderson led the team with 25 points in that game, finishing with 11 rebounds and 9 assists, just one assist shy of a triple-double.

He helped seal the win in the fourth quarter by draining back-to-back field goals that hit nothing but net.

“It’s not like I don’t get nervous anymore. It’s just that I try and remember that I have been really nervous and played really well,” he said.

“So that just gives me a little extra confidence to go and shoot the ball even if I feel myself starting to get a little tight when the game gets tight.”

Anderson notched his second double-double of the tournament with 15 points and 10 rebounds in just the first half. He finished the game with 26 points, 20 rebounds and 9 assists.

The Canadian men’s team has finished in the top three in all five previous Parapan American Games they competed in.