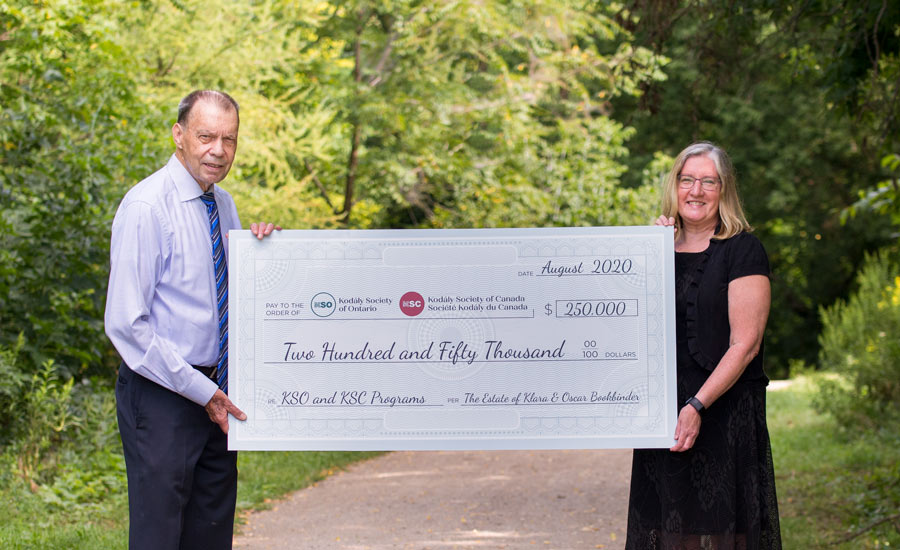 Bringing music to children - Kim Eyre, President of the Kodaly Society of Ontario, is presented with the Bookbinder estate donation by estate executor Peter Hannam. Photo by Riann Willoughby Photography

ROCKWOOD – A local couple, known for their love of music and teaching music to children, has left a $250,000 gift to the Kodály Society of Canada (KSC).

“The Kodály Society of Canada is humbled and honoured to be part of the Bookbinder’s legacy in Canada,” stated KSC president Dr. Jody Stark in a press release.

Stark noted the Bookbinder gift will allow the association to support quality music education in Canadian schools and communities.

“We anticipate being able to enact several initiatives that will have a direct benefit to music educators and students across the country,” Stark stated.

Both Oscar and Klara studied under Zoltan Kodály in Hungary, where they were born. Kodály became renown for his teaching methodology, which both of the Bookbinders adopted.

The Bookbinders fled Hungary in 1957 and settled in Toronto, later moving to Rockwood in 1977.

Her approach to teaching was influenced by her education and experience in Hungary, and she self-published 10 books of pedagogical compositions and two volumes of compositions by her students.

“Mrs. Bookbinder was my music teacher in Rockwood,” said Carol Hannam in an interview.

“They had no family of their own and my parents became their caregivers in their later years. My father Peter is executor of their will.”

Carol Hannam said the couple lived frugally and only returned to Hungary once to visit family there.

“So to have this amount of money, and to be giving these sizable donations, that’s really something,” she said.

The Ontario arm of the Kodály Society will receive some of the donation, which it intends to use to launch a project with school teachers.

“We plan to offer workshops for early childhood, kindergarten and primary music educators in as many Ontario regions as possible over the next five years,” explained KSO president Dr. Kim Eyre.

“We want to honour Mrs. Bookbinder’s commitment to early childhood music education in an impactful way and support teachers to bring music into their classrooms at a critical stage of children’s development.”

In June, the Bookbinder estate gave $250,000 to Hospice Wellington – the agency that cared for them in their final days.

That gift will allow the creation of a three-year pilot of the Hospice Wellington Rural Community Programs for the people of Guelph-Eramosa, Wellington County and off-site spaces in Guelph.

Carol Hannam said one more large donation from the Bookbinder estate will be announced soon.