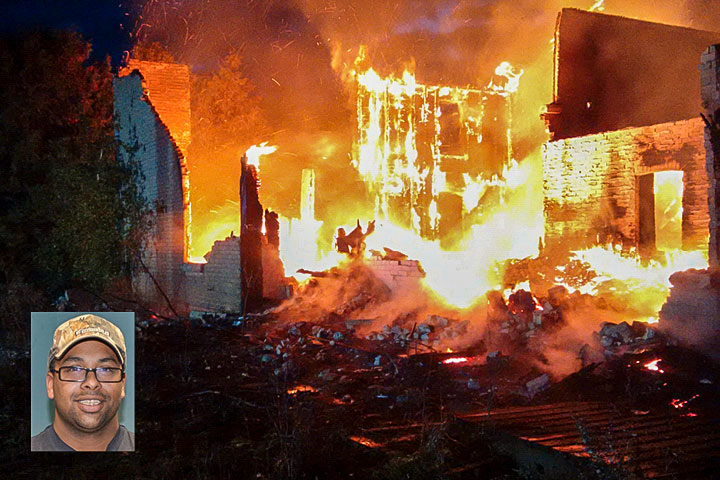 Justin Beal, inset, has been sentenced to 21 months in prison, 36 months probation and must pay $39,000 in restitution for committing a string of arsons in Wellington County in 2016 and 2017, including the above blaze on the 3rd Line of Guelph-Eramosa on Oct. 14, 2016.
(Advertiser file photo/Justin Beal Facebook photo)

GUELPH – The man who set a string of fires in Erin and Guelph-Eramosa in 2016 and 2017, has been sentenced.

The Rockwood man was found guilty of five counts of arson in December 2019 and had a pre-sentencing hearing in March 2020, but his sentencing was delayed due to the COVID-19 pandemic.

Beal had previously pleaded not guilty to seven counts of arson.

There were 27 suspicious fires reported in Wellington County in 2016 and 2017 – most in abandoned buildings – and no one was injured or died in the fires.

The first was on Oct. 14, 2016 at 5230 3rd Line in Guelph-Eramosa, when Beal threw a lit cigarette into a bush outside an abandoned dwelling and fire eventually engulfed the house.

Beal entered the house searching for people and had to jump from a second storey window to escape.

The other fires Beal was found guilty of setting include:

Guelph-Eramosa Mayor Chris White had submitted a letter to the court stating how the stress and worry of the fires affected the entire community.

Fear was palpable and the danger was very real to firefighters called to put out the blazes, White stated in his letter.

Crown Attorney Judith MacDonald had called for a sentence of two years less a day, plus three years probation and restitution of $45,000.

Tsang had told the court that Beal has ADHD, ADD and Tourette syndrome.

In a statement to police on Oct. 27, 2017 Beal said he had a fetish for lighting fires and that lighting them helped as a “stress relief” from personal issues such as dealing with personal debt and family issues.

Beal turned himself in to police in 2017 when he realized he was putting firefighters in danger.

When on probation, Beal is also not to not possess incendiary devices like lighters and matches.