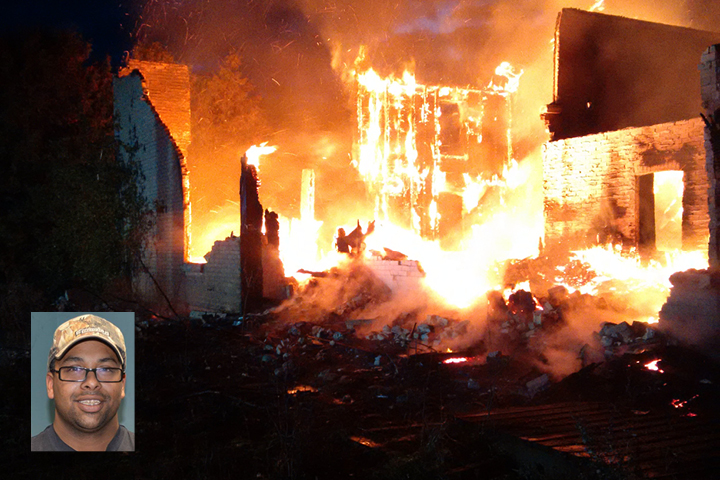 Guilty - Justin Beal (inset) of Guelph-Eramosa has been found guilty of five counts of arson in connection with suspicious fires in Wellington County, including this blaze on the 3rd Line of Guelph-Eramosa on Oct. 14, 2016.
Advertiser file photo/Justin Beal Facebook photo

BRAMPTON – A Guelph-Eramosa man has been found guilty of five counts of arson in connection with suspicious fires in Wellington County in 2016 and 2017.

From September 2016 to August 2017, Wellington County OPP and local fire officials responded to a total of 27 suspicious fires, most of which were in abandoned rural homes and buildings.

Beal was first charged in October 2017 with six counts of arson and released on bail on Oct. 30, 2017. In January 2018 he was charged with a seventh fire. Since that time there have been numerous pretrial and court dates regarding the matter.

Beal’s sentencing hearing is scheduled for Feb. 27 at 9am at the Ontario Superior Court of Justice in Guelph. Beal’s two additional arson charges will also be addressed at that time.

Beal was found guilty in relation to the following fires:

An agreed statement of facts obtained by the Advertiser notes Beal had “no known ties” to any of the property owners where the fires were set.

In a statement to police on Oct. 27, 2017 Beal said he had a fetish for lighting fires and that lighting them helped as a “stress relief” from personal issues such as dealing with personal debt and his family.

Beal said he stopped lighting fires when he realized firefighters would be unable to respond to other emergencies while fighting his fires.

“It was the last thing he wanted on his conscience,” reads the agreed statement of facts.

During the Oct. 27, 2017 police interview, Beal provided information on all five of the above fires.

Beal’s first count of arson occurred at 5230 3rd Line in Guelph-Eramosa. In the early morning hours of Oct. 14, 2016 Beal threw a lit cigarette butt into a bush outside an abandoned two-storey farmhouse. The bush ignited and eventually the flames moved to the house.

As the fire spread, Beal entered the house and searched for people. He stayed until the smoke intensified. Fire blocked his front door exit so he jumped out a second storey window.

When Guelph-Eramosa firefighters arrived they learned the house was abandoned and deemed the structure unsafe to enter. They allowed it to burn.

Once again, Beal used a cigarette to start the fire at 5292 3rd Line in Guelph-Eramosa on Oct. 19. 2016. At about 1:30am he threw the cigarette at a lazy boy chair on the main floor of a two-storey century farmhouse. He stayed in the house while the fire spread.

The property manager discovered the fire after he saw suspicious activity on a trail camera. He called the fire department and Guelph-Eramosa firefighters extinguished the flames.

Beal drove around farm fields close to 6873 Highway 7 in Guelph-Eramosa at about 3am on Feb. 3, 2017 before lighting an old 20-by-40 foot building on fire using a cigarette lighter to ignite a bag of insulation.

A passerby noticed the fire and called 911. Guelph firefighters attended the scene but the structure was completely destroyed.

Beal was found guilty of setting two fires on June 25, 2017. He spent the night driving his Mustang around because “he was in a bad mood,” according to the agreed statement of facts.

At about 8:15am Beal drove his car to a metal gate at the entrance to a quarry on the 3rd Line by Sideroad 10 in Erin.

The property also held an abandoned cinder block gatehouse that Beal spent about an hour in before setting it on fire.

Using a Bic lighter, he set four to five fires in a box in the closet. Those fires extinguished themselves. Next Beal set drywall on fire, intentionally burning the building.

A witness saw a man matching Beal’s physical description driving a black Ford Mustang suspiciously around the time of the fire.

“The witness noticed that the vehicle came towards him at a high rate of speed, abruptly stopped and turned the other way,” the agreed statement of facts reads.

Witnesses later saw the smoke and called 911. Guelph-Eramosa firefighters were able to extinguish the fire before any major damage occurred to the building. The clean-up cost was $5,000.

On the same day, at about 9am, Beal lit a fire in the unoccupied single level detached family house at 5324 Wellington Road 125. He went to the basement and lit a white blanket on fire with his cigarette lighter.

This fire was lit 20 to 30 minutes after the gatehouse fire.

Witnesses called 911 and firefighters who were on site at the gatehouse fire attended the house fire and found it fully engulfed in flames.

Firefighters tried to enter the house but did not continue because they were unsure of the structural safety of the building.

They controlled the fire but the house burned to the ground.

Surveillance video captured a vehicle matching Beal’s Mustang driving in the area of the fire around the time it was thought to have been set.