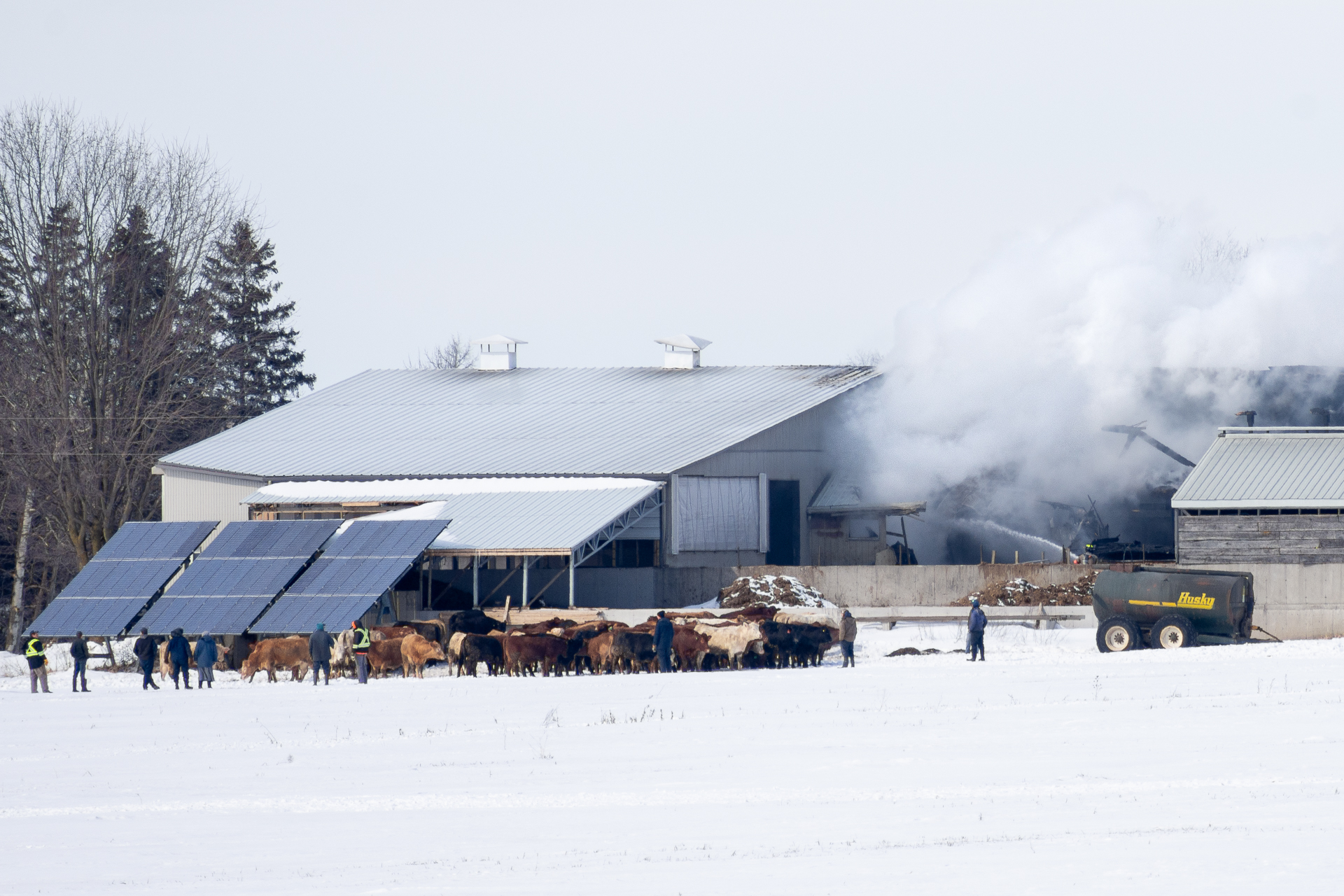 Once the flames take hold, there’s little that can be done to wrestle back control from a burning barn. (Advertiser file photo)

WELLINGTON COUNTY – Once the flames take hold, there’s little that can be done to wrestle back control from a burning barn.

A farmer is left to stand back and watch their livestock, equipment and hard work be reduced to charred scraps.

Tragedy begins with a flicker — perhaps only a candle-like flame from a  corroded outlet powering a heater to keep cattle warm through a winter night. Minutes later, fed by an abundance of fuel in its path, the flame has mutated into an unquenchable disaster.

Left with little choice, like the farmer, volunteer firefighters stand back doing what they can to protect nearby buildings and valuables with water trucked in as the fire feasts.

“The heat that comes out of [barns] is phenomenal; you’re looking at 1,200 degrees, roughly,” said Jason Benn, deputy fire chief of the prevention and public education division of Centre Wellington Fire and Rescue Services.

“You really can’t do much for a barn when it’s fully engulfed other than put some water on it.”

What’s left once the smoke clears are blackened remnants and much work ahead.

Anecdotally, Benn says destructive fires have been on a decline across his 20-year career, but when they do happen, they’re more costly due to building size and the expense of materials.

A barn fire south of Elora last month had a damage estimate pegged at $300,000. Benn said had firefighters not been able to prevent the fire from spreading, damage would have reached $1 million, considering a recently built addition.

“To rebuild it today would be substantially more expensive,” Benn said.

Dan Carlow, the west region manager of the environmental management branch of the province’s agriculture ministry, said barn fires with a loss of livestock are trending down overall.

“Over the last decade, generally, we’re dealing with between 12 and 18 barn fires with livestock per year,” Carlow said.

That number two decades ago would have been closer to 24 fires annually.

The Ontario Ministry of Agriculture, Food and Rural Affairs (OMAFRA) tracks only barn fires where livestock has been killed, not those where damage is confined to property.

Those numbers are provided by the province’s Office of the Fire Marshal and data reveals barn fires housing equipment and/or animals have dropped, from 186 in 2009, to 114 in 2020.

Although barn fires have decreased compared to 13 years ago, the associated value of damage has risen dramatically.

Explaining the trend, Carlow said barns have moved away from wood to concrete and steel cladding. And flammables, such as animal feed, are being stored separately from the barn.

“The livestock barns of yesterday, that I grew up in … one spark and it was like throwing a match at a gas tank,” Carlow remarked.

Advanced building materials and fire prevention technology are making a “huge difference” in lessening the fires, Carlow said. “We’re just trying to get everybody on-board, and of course this stuff is not cheap.”

But neither is replacing a barn or cleaning up deadstock.

“When these things happen, they’re absolutely devastating, not only for the farmers and [their] animals, but just trying to recover from one of these things is massive,” he said.

Income is lost, barn rebuilds often are not factored into budgets, and farm families and employees can be left without jobs.

The recovery process is a long one, Carlow said, speaking of cleanup, disposal, navigating insurance, finding contractors to rebuild, and eventually the rebuilding itself.

Prevention is the first line of defence

According to Carlow, many barn fires begin with an electrical system.

In fact, it’s the single largest cause of barn fires, according to OMAFRA.

Eliminating those fires begins with preventing them from happening at all by identifying where problems may be waiting, such as an electrical box with too much load.

Some monitoring systems are even connected to large flashing lights on a barn’s exterior, alerting neighbours when something is wrong.

“When you look at it overall, spending time on preventing future fires is something that has good return,” Carlow said. “An ounce of prevention is worth a pound of cure.”

He suggested having an insurance adjuster or fire prevention officer walk through and suggest where improvements can be made.

Benn said the number one thing he recommends is preventative maintenance and he suggested tips he’s picked up from his time in fire prevention.

He specifically highlighted extension cords, saying they should not be permanent fixtures in barns.

“I’ve seen numerous extension cords used all the time … they’re designed for temporary use only,” he said.

– heating equipment be appropriate and designed for the task at hand;

– allowing equipment and implements to cool down before being parked or stored indoors;

– feeding wires through conduit to save them from gnawing rodents; and

– covering electrical switches and outlets to keep out corrosive materials.

The Electrical Safety Authority (ESA) recommends all non-essential equipment and overcurrent devices be installed separately and away from livestock.

Having participated in controlled barn burn research projects in Puslinch and North Perth, Benn said a fire originating in a small sub-room took nearly 20 minutes before it broke out from beyond the room’s door, whereas a wide-open barn was consumed in under five minutes.

Farther north in Minto and Wellington North, two recent drive shed fires with damage in excess of $300,000 were attributed to block heaters.

Callise Loos, deputy chief for both Wellington North and Minto fire services, passed along some tips specific to the safe operation of the heaters:

– regularly examine the condition of the heater’s plug and lead connection;

– check for cracked or exposed wiring;

– never plug in a block heater in an area where combustible materials are near or underneath a tractor;

– install battery cut-off switches to de-energize equipment when not in use;

– regularly inspect extension cords and scrap those that are damaged or not rated for industrial use;

– never plug in a block heater in an area where there is a high risk of methane gas build up.

Other general tips from OMAFRA:

– remove combustible material, like grass and trees, from around barns;

– store fuel away from barns so vapours don’t enter barns;

– equip barns with a minimum five-pound ABC fire extinguisher at each exit.

For a comprehensive guide on reducing the risk of fire on your farm, visit: www.omafra.gov.on.ca/english/engineer/barnfire/toc.pdf.