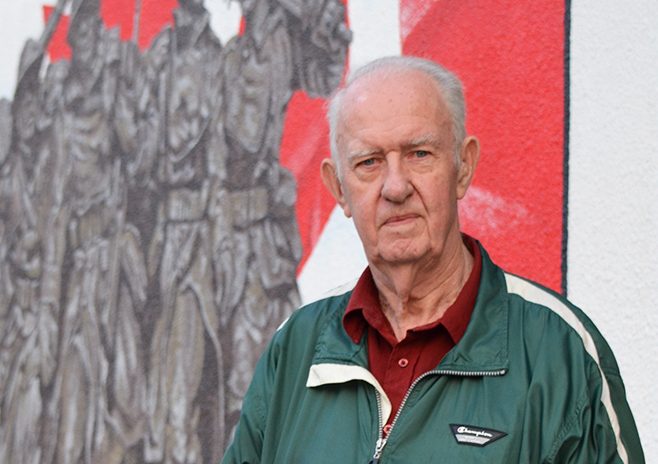 John Walsh stands in front of one of the murals he helped bring to downtown Arthur. Advertiser file photo

ARTHUR – One of Arthur’s most well known citizens, a man who dedicated much of his life to his family, community and country, has died.

Historian and retired pharmacist John Walsh passed away on Nov. 21 at the age of 96.

“I’m pretty proud of my dad,” an emotional Joe Walsh told the Advertiser.

A week after his father’s death, Joe said he’s still “in shock” every time he sees something in the Arthur pharmacy that reminds him of his dad.

“If I accomplish one-eighth of the things in my life that he did in his, I’ll be a very happy man,” said Joe.

“He’s made such a huge contribution. … There’s so much, I hardly know where to start,” Lennox said.

He called Walsh “a great leader,” noting his many accomplishments with the pharmacy, the local historical society, raising a family, and his church involvement.

“John was always there pitching in,” said Lennox.

“To say he’ll be missed is certainly an understatement.”

Longtime friend Faye Craig, secretary of the Arthur and Area Historical Society co-founded by Walsh, said Walsh was “a friend to everybody.”

“He’s going to be greatly missed,” Craig said in a Nov. 24 interview.

“He had such a friendly, caring manner. Not everyone could present themselves the way John Walsh could.”

Craig, who knew Walsh for 46 years, fondly recalled him phoning her several times over the years to encourage her to take on leadership roles with various organizations or events in their beloved hometown.

A follow-up call always came, she said, thanking her for doing a “good job for Arthur.”

“He was a remarkable man and a man with a generous, kind heart,” Craig told the Advertiser.

“He took the time for everyone and made them feel important. He was that kind of gentleman.”

Perth-Wellington MP John Nater spoke about Walsh in the House of Commons on Nov. 24.

“Earlier this week, John Walsh passed into history, but the legacy he leaves behind for his family, his community and his country will long survive,” said Nater.

“I say ‘Bravo Zulu’ (a naval signal meaning ‘well done’) to Mr. Walsh, and I thank him for his service.”

Born on May 31, 1926 in Peel Township, on a farm just outside Arthur, Walsh moved to the village in 1932, at the age of six, with his mother and four siblings following the death of his father.

He was in high school when the Second World War broke out and decided to enlist not long after his 18th birthday. 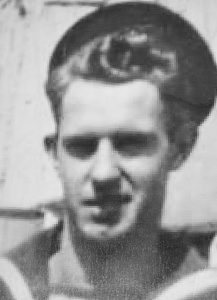 “You kind of felt as though you were a slacker if you weren’t [in the service],” Walsh once recalled of the sentiment in the village, adding he had many friends and several cousins who also volunteered.

“I think that was carried forward from the First World War.”

Walsh served in the Navy and was stationed on the minesweeper HMCS Wallaceburg in the fall of 1944.

His job, as part of the ASDIC team (the anti-submarine detection investigation committee), was locating submarines.

He was discharged in December 1945 and completed his high school education in Kitchener.

“Like so many of his generation, when John Walsh returned from the war, his service did not end,” Nater stated in the House of Commons.

“He continued to serve the community as a pharmacist, a Legion member, and Arthur’s most dedicated historian.”

From veteran to pharmacist

Walsh married his wife Mary Teresa (Tess) in 1952 (she passed away in 2011), and they had eight children: Jerome, Marian, Jane, Valerie, Frank, Jack, Joe and Christopher.

Walsh wasn’t sure what he would do for work after the war, until town druggist Maurice Douglass asked if he would be interested in working at the pharmacy.

“I never gave it much thought before that,” Walsh previously told the Advertiser.

He served a three-year apprenticeship with Douglass Drugstore in Arthur, followed by two years at the University of Toronto, and graduated in 1952.

Later that year he purchased the inventory and fixtures of Russells’ Pharmacy in Arthur.

The store, which has undergone two major renovation projects over the years and was taken over by Joe, celebrates its 70th anniversary this year.

Lennox, who went to the same school as Joe, said he first came to know Walsh as a kid going to the pharmacy.

“I remember going there with my father and picking up some animal health supplies and talking farming,” he said.

The experience in those days, Lennox recalled while laughing, wasn’t “something you expect from every pharmacy.” 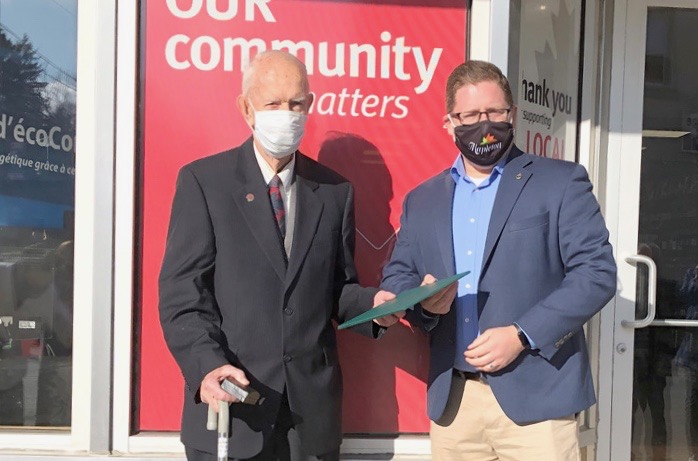 In 2020 Perth-Wellington MP John Nater, right, presented John Walsh with a commemorative lapel pin and certificate of recognition created to honour the 75th anniversary of the Allied victory in the Second World War. Advertiser file photo

Joe said his father’s love of Arthur and his devotion to the pharmacy were imparted on him from a young age.

“It wasn’t a big jump for me to follow in his footsteps,” Joe said of his decision to become a pharmacist.

Several others also followed suit, including Joe’s son (pharmacist in Mount Forest), his daughter (pharmacist’s assistant in Arthur), his wife (chief supervisor in Arthur and Mount Forest) and his nephew John (operates the Drayton Pharmacy).

And despite attending school in Boston and working alongside Harvard-educated physicians, Joe always knew where he would end up.

“There was no question I was coming back to Arthur,” he said.

“It’s nice seeing all the personal tributes people have been doing online and passing along,” John said by phone from the Drayton Pharmacy.

“All those nice things people are saying about him, you can’t just gain that kind of respect … that was his life.”

Before starting his own pharmacy operation, John worked at the Walsh’s pharmacies in Arthur and Mount Forest.

“I know people really respected grandpa and looked up to what he did,” he said.

The stories of how his grandfather helped people made an impact, and now John is doing his best to emulate the man, something he says is “easier said than done.”

The senior John’s reach went deep into the community, his grandson says, and the pharmacy at times became a meeting place.

“You wouldn’t believe how many people over the years would come in from everywhere just wondering if John was working,” he said.

And while many have described Walsh’s great contributions as a historian and pharmacist, his grandson says “there is a bigger picture … that’s more rewarding than anything” — his family.

His grandfather was always there for family birthday parties, dinners and hockey games.

“And I was just one of 20 grandchildren,” John said, laughing.

“When I look back, he was always there at those things that matter.”

Joe echoed that sentiment, noting his father, who had a great sense of humour, was also a devout Catholic.

A longtime parishioner of St. John’s Catholic Church in Arthur, Walsh served nearly every role possible at the church, outside of priesthood.

He was a constant presence at the church, was a Knights of Columbus member and also served on the cemetery board.

Even in his final days, Joe noted, Walsh prayed regularly and often had a rosary in his hands.

“His faith was very strong,” Joe said. “If he doesn’t get into heaven, none of us have a chance.”

Walsh coached various levels of hockey in Arthur for over two decades and in 2003 he co-founded the Arthur and Area Historical Society along with the late Dave Stack.

He was a longtime member of the Arthur Legion, where he took on various roles and projects over the years.

Walsh published several popular local history books and was for years a fixture as a guide for tours of the historical rooms at 146 George Street in Arthur.

In recent years he was involved with a number of significant historical society projects in the village:

“He was always into history,” said Joe, noting his parents travelled often to England and Ireland, where they had ancestral ties.

Later his father focused more on the history of Arthur.

He raised cattle and sheep on his small hobby farm while raising eight children with Tess.

“His three greatest loves were family, faith and Arthur,” states his obituary. 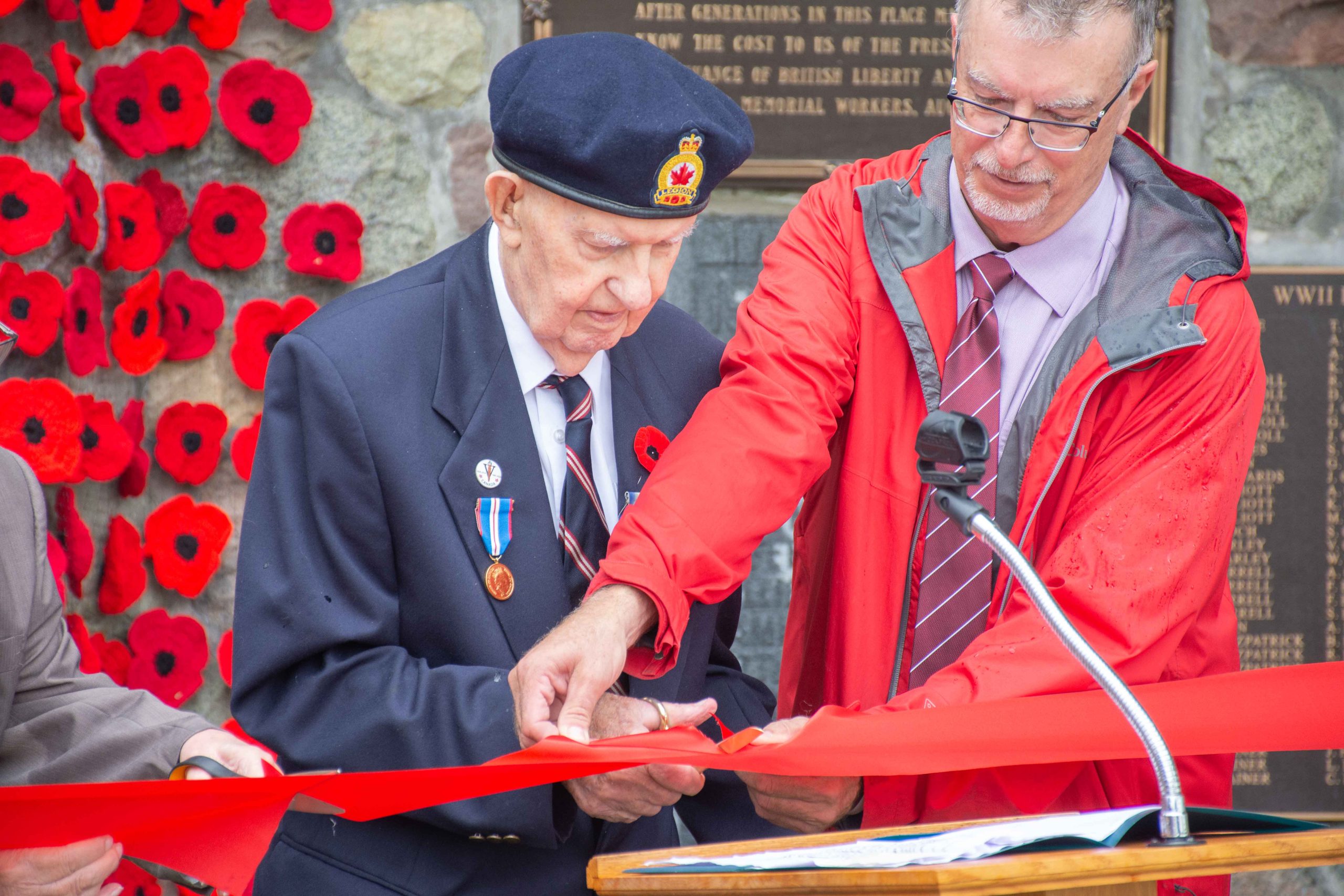 John Walsh snips a ribbon during the opening ceremony for the Arthur 150 celebration on July 1. Advertiser file photo

Walsh once told the Advertiser that one of his most rewarding activities was talking with local students about Arthur’s history.

“It’s worth the effort.”

In 2016, Walsh was named Wellington North’s senior of the year.

Also that year, the township agreed to name a street after him – in recognition of his service in WWII and all the work he has done for Arthur since – an honour usually bestowed posthumously.

“Possibly no other individual has contributed more to preserving and promoting the history of Arthur than Mr. Walsh has,” developer James Coffey told council during a presentation to lobby for Walsh Street.

Craig said the street naming is indicative of the kind of person Walsh was and the respect he garnered in the community.

She added Walsh was “very proud” of the Arthur 150 celebrations in the village this summer.

“He was very, very happy – and so were we that he could be there to enjoy it as well,” she said.

Craig noted the Arthur and Area Historical Society will carry on – “We must carry on,” she said – always keeping in mind the “fine example” set by Walsh.

Joe said things sort of came “full circle” for his father just last year, when family members tracked down the ship bell from the HMCS Wallaceburg.

They had a museum in Nova Scotia send the bell here so Walsh could see it one last time.

Joe said it was a special moment for his father, who, like many of his peers, shied away from personal stories about the war.

“It was very emotional,” said Joe.

“It was the most he had ever opened up about the war and what happened.”

Walsh’s family will receive friends at the St. John The Evangelist Parish Centre, 150 Georgina Street in Arthur, on Dec. 2 from 1 to 4pm and 7 to 9pm.

The funeral will be at St. John The Evangelist Roman Catholic Church on Dec. 3 at 1pm, followed by interment in St. John’s Catholic Cemetery.

For those wishing to express their sympathy, the family has suggested donations to St. John Cemetery or the Arthur and Area Historical Society.

-With files from Jordan Snobelen