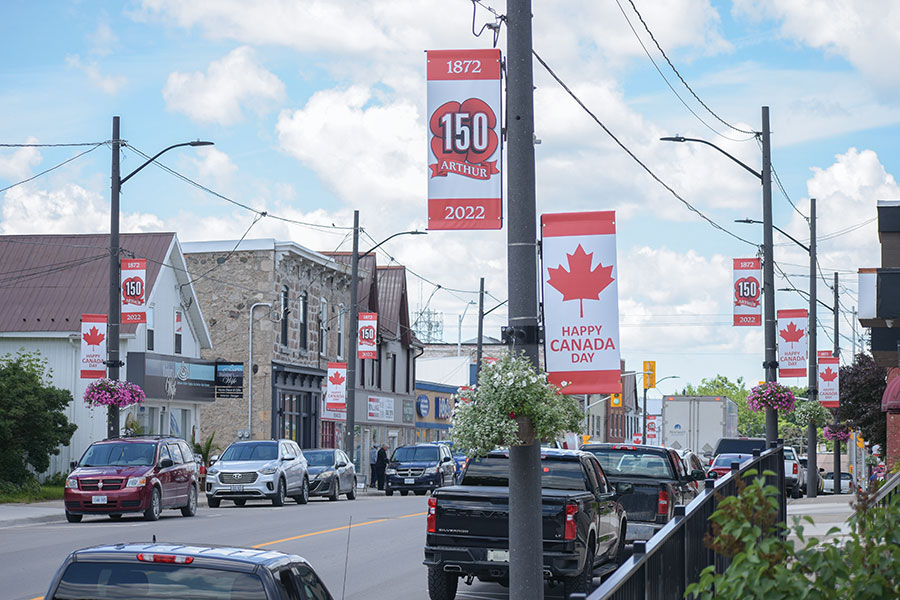 It has been 150 years since Arthur was incorporated in 1872 and the village is marking the occasion with three days of celebration, from July 1 to 3. Arthur 150 and Canada Day banners and 36 hanging flower baskets now line George Street in recognition of the 150th anniversary of Arthur's incorporation in 1872. Photo by Jordan Snobelen

ARTHUR – If there’s one date Faye Craig wants you to know about, it’s 1872, the year Arthur was officially incorporated.

The past is being brought to the forefront this Canada Day weekend as Arthur celebrates springing up on the map 150 years ago.

The village, named after Arthur Wellesley, who became the Duke of Wellington, was the home of saw and gristmills in the early 1800s.

Settlers from Ireland, Scotland and England arrived, and between 1848 and 1852, a post office, school and church were constructed.

Railroad tracks, built by Wellington, Grey and Bruce Railway between 1870 and 1872, helped connect an agrarian population of around 750 people to the great beyond.

Hotels were built to accommodate those travelling by rail, and electricity, routed along a power line from Grand Valley, illuminated the village in 1897.

Arthur may look a little different – boundaries have shifted and unprecedented rates of development coming to the village will alter its course – but if you know where to look, there remain signs of its earliest beginnings.

On Smith Street, an apartment building, built in 1890, once served as the village’s high school; a Conestoga Street North home was once  a train station; a home on Edward Street was a hotel; a home on Georgina Street served as a convent for nuns; the Senior Citizen Hall on Isabella Street, before becoming a town hall, was used to train troops; the Crawford Funeral Home on George Street was home to the Wellington County Creamery; and the former Queen’s Tavern on George Street has been rebuilt into an apartment building – to name some repurposed buildings in the area.

In 1999, Arthur was one of a few townships amalgamated to form the modern-day Township of Wellington North. 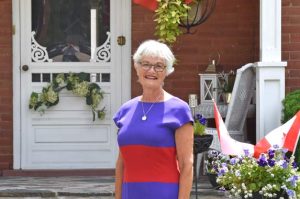 Arthur retains its distinct village identity; one tethered to its roots. Its 2,450 residents make it what it is today: a modern community with a sense of respect for the village’s origin story.

“The history of the community is very important; that’s what we’re celebrating,” said Faye Craig, an Arthur resident since 1976 who chairs the Arthur 150 steering committee.

Wellington North councillor Lisa Hern approached Craig at the beginning of the year about forming a committee to plan the sesquicentennial celebrations.

“Faye and the core committee have put in a substantial amount of hours, passion and thought into making the weekend a success and deserve an immense amount of gratitude,” Hern stated in an email, adding the entire community deserves much credit.

“The village of Arthur has never looked better – so many groups, citizens and the township have collaborated to get us here,” Hern said. 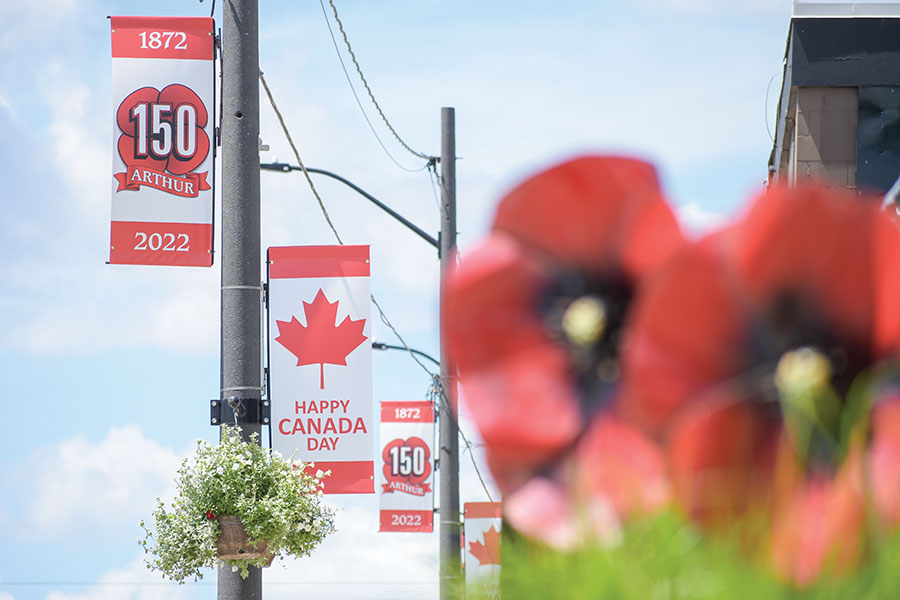 Banners and hanging flower baskets have been installed along George Street in Arthur ahead of the village’s 150th anniversary celebrations July 1 to 3. Photo by Jordan Snobelen

Five members, chosen by Craig for their enthusiasm, advocacy and selflessness, form the core steering committee.

The committee’s first meeting took place in the basement of St. Andrew’s Presbyterian Church and it continued to meet every couple of weeks thereafter at the Arthur Chamber of Commerce (David M. Kozinets Centre), gradually bringing more people on to look after different elements of the celebrations.

Since January, the committee and another group of well-connected volunteers and residents have spent what Craig describes as “countless hours” brainstorming and orchestrating an itinerary for three, jam-packed days of events throughout the Canada Day weekend.

What could take years of preparation is being pulled together within six months – something Craig says is possible because of keen volunteers who are trying to “beautify the community and bring people together.”

“I feel that in our community of Arthur we really do have some special, dedicated volunteers,” she said.

Vivianne Macdonald is organizing a parade that will depart Arthur Public School on July 1 at 3pm; Debbie Atkinson is looking after parade registration; Dianne Macdonald is compiling a scrapbook of Arthur memorabilia; Bonny McDougall is collecting crocheted poppies to display throughout downtown on George Street; Bonnie Holliday, Arthur United Church minister, is chair of a July 3 ecumenical service; and Gerald and Mary Townsend are creating a ledger to record the names of those who come to the celebration. 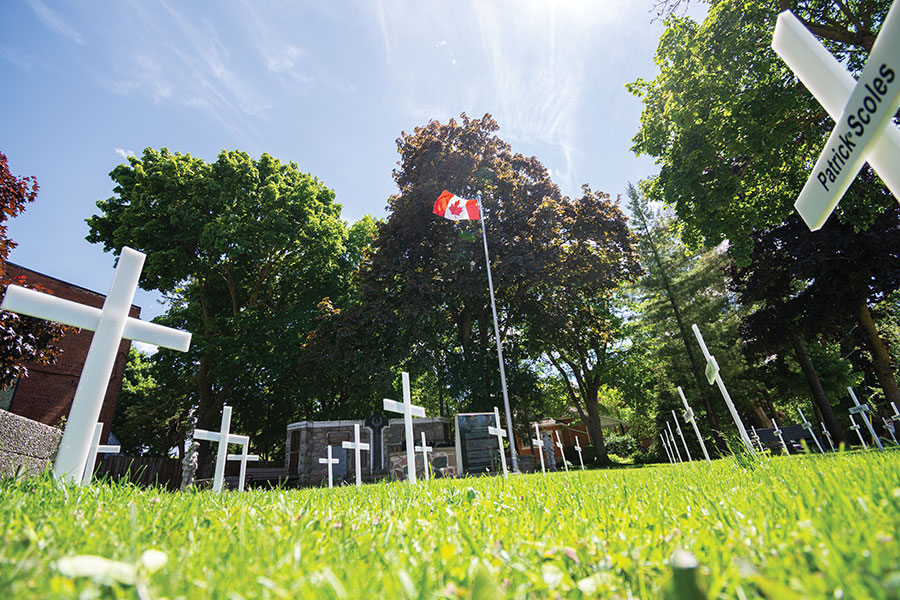 he Arthur cenotaph, built with stone from local farms and unveiled in 1923, commemorates local soldiers who made the ultimate sacrifice in the First and Second World Wars. White crosses have been arranged by Jeff and Harold McKee for Arthur 150, bearing the names of 76 locals who died. Photo by Jordan Snobelen

And local businesses and service clubs such as the Arthur Optimists, Lions Club and Legion, have stepped up, donating funds toward features such as a petting zoo and pony rides (to be found at the Arthur Curling Club on July 1).

Current residents and those being called back home for the celebration will get to experience the opening of the Brent Barnes Memorial Skatepark, a parade, horse-drawn rides, live music, and fireworks – to name some of what’s happening.

But Craig doesn’t want what she sees as the key message being lost in all the hoopla, crackling fireworks and sizzling barbecues.

“Knowing the heritage of the community leads to respect, to honour the people that fought for our country,” she said.

“Yes, it’s a party, but we have to remember why we’re having it.”

On July 1 at 11am, veterans from “Canada’s most patriotic village” will be remembered at the celebration’s opening ceremony at the Arthur cenotaph (George Street and Frederick Street West).

There, 76 crosses, bearing the names of the dead from the First and Second World Wars, have been arranged by Jeff and Harold McKee.

Veteran, Arthur resident, and business owner John Walsh, who recently celebrated his 96th birthday, is planning to wield a pair of large, golden scissors (engraved by Ron Wilkin Jewellers) and snip the ribbon that Friday morning.

He will be joined by Canadian Senator Rob Black, Wellington North Mayor Andy Lennox, MPPs Ted Arnott and Matthew Rae, MP John Nater, Dave Kozinets, Nancy Croft, and the Arthur 150 committee, who will be positioned behind the 75-foot ribbon.

Canada Day merchandise, including pins, ribbons and flags, will be available along with Arthur 150 swag from July 1 to 2 at the Arthur Chamber of Commerce, and on July 3 at the Arthur Community Centre.

There will also be a daily draw at 4pm for a gift basket consisting of local products and gift cards.

“May we celebrate the 150th, reflect on the significance of working together during challenging times, and believe that being faithful, caring citizens does help to build a strong community,” Craig said. 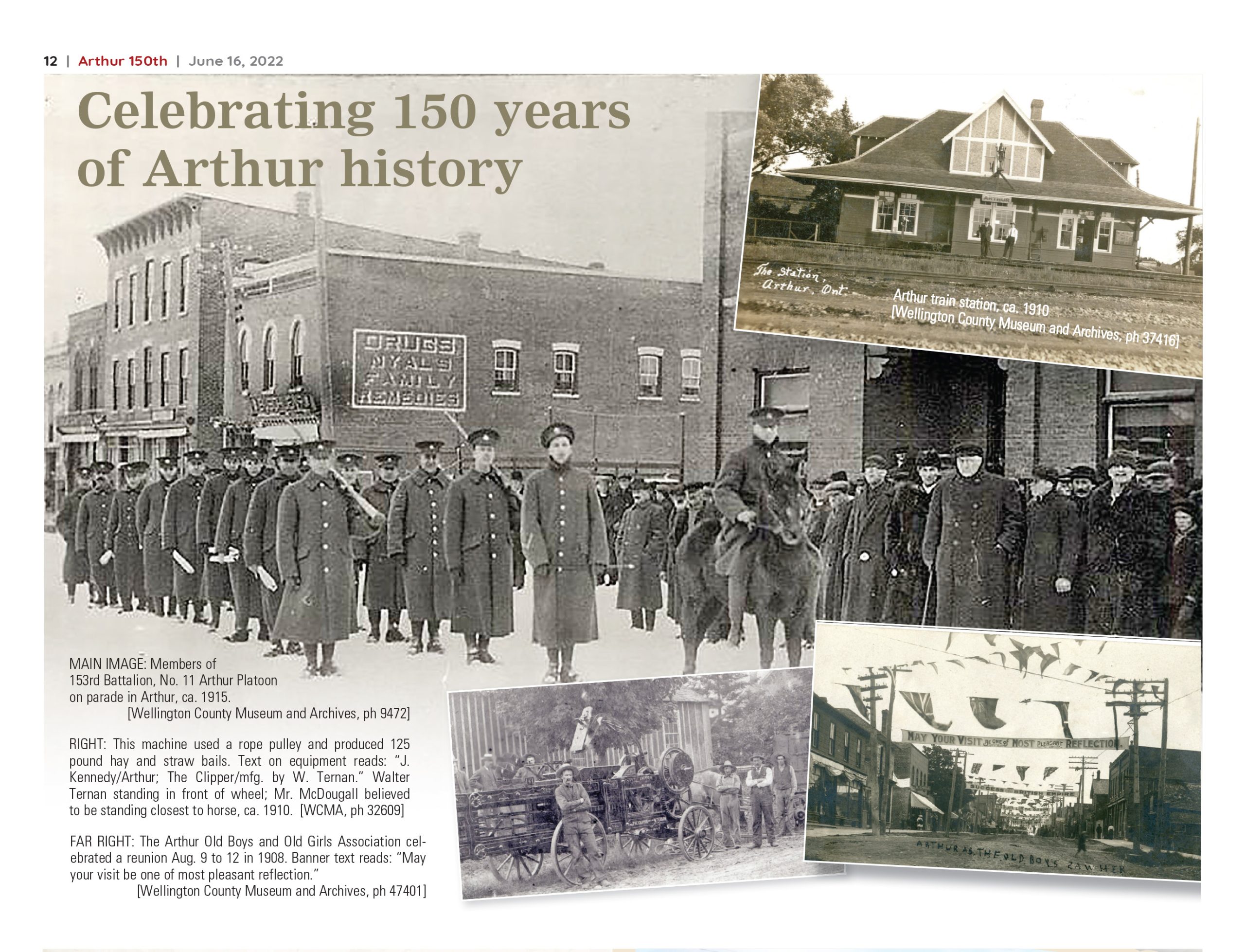