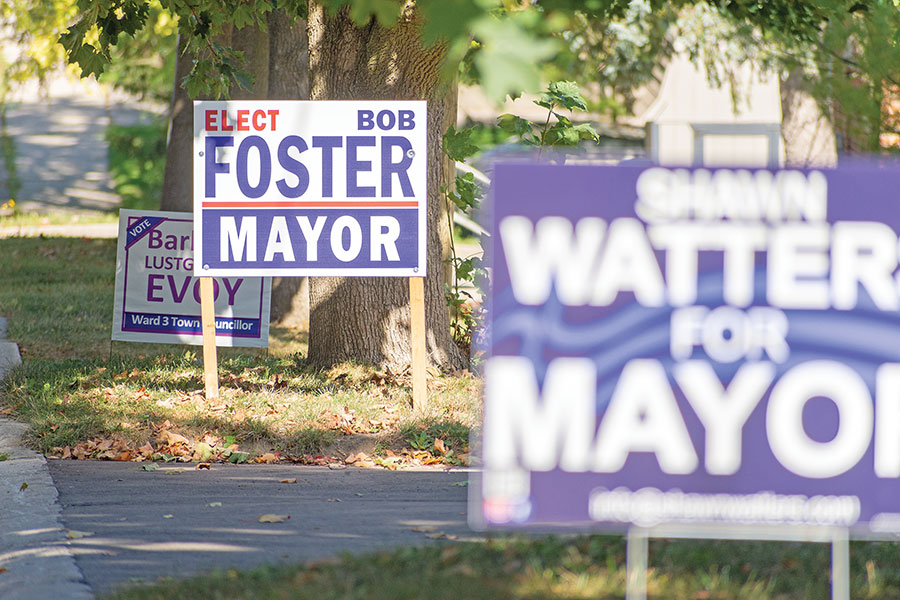 WELLINGTON COUNTY – Electors have a variety of options available for casting ballots on Oct. 24 as local municipalities embrace traditional and modern voting methods.

In Puslinch, as was the case in the 2018 municipal election, in-person voting remains the primary option, but the township is introducing a new vote-by-mail option.

To vote by mail, you’ll have to request a voting kit by contacting the municipality either by phone, email, or in-person at the municipal office (7404 Wellington Road 34).

“I think its really helpful for those in other situations who would have to get a proxy or use accessible voting equipment,” Hoytfox added.

Dominion Voting Systems is preparing 500 mailed voting kits to be mailed in the next couple of weeks.

The cutoff date to return ballots is Oct. 13, however ballots can be dropped off in-person at the township office after that date during business hours, or after-hours in a locked dropbox.

“It would be a very big step” to go from all in-person to an entirely different method, Hoytfox said, noting, “Historically this is what we’ve done.”

Similar to past municipal elections, the township will use Dominion Voting Systems tabulators to count ballots, and accessible voting methods will be available.

An advanced voting day is being held at the Puslinch Community Centre (23 Brock Road South) from 9am to 5pm on Oct. 15.

The township is also attending the Morriston Park Nursing home to ensure residents can cast ballots there.

On the official Oct. 24 voting day, there are two locations where ballots can be cast. Both the Clifford Evans Training Centre and the Puslinch Community Centre will be open from 10am to 8pm that Monday.

Voters here have the option of voting online or by phone. The township is using the voting service provider Scytl for the first time, though both voting methods were also used in the 2018 election.

Turnout then was similar to previous years when vote by mail was used, so the digital-based methods have taken over.

Voter kits are being mailed with Canada Post on Oct. 3 and should be received by Centre Wellington residents between Oct. 10 and 11 and the option to vote officially becomes available at 10am on Oct. 14. Voters will receive instruction letters with details on how to vote and a PIN number.

Should you need a hand with voting, the township has voter help centres operating between Oct. 15 and 24.

For the first time, Mapleton is offering an online voting option in addition to traditional vote by mail.

Like Puslinch and other municipalities, Dominion Voting Systems is handling voting kits, which will be mailed to residents this week. Once their voting kit arrives, Mapleton residents can vote online right away, as of Sept. 24.

Looking back to the 2018 election, municipal clerk Larry Wheeler said residents preferred mailing in ballots, but it wouldn’t surprise him to see preferences gradually move to voting online.

Residents can always visit the municipal office (7275 Sideroad 16) and ask for help with voting; a private area will be provided to cast a ballot, and a computer will also be available for voting use if that method is preferred.

Voting kits will be mailed to eligible voters here and can be mailed or hand-delivered to one of the locations listed below. Voting can begin as soon as a kit is received.

If you don’t receive a kit, one can be picked up at any of the ballot drop-off locations, or at the town’s office on voting day until 8pm.

Residents will vote by mail again in this election, with two Dominion Voting Systems tabulators counting ballots to be mailed out this week.

The tabulators were first used in a 2015 by-election, according to municipal clerk Karren Wallace, following the previous municipal election held in 2014, when residents voted by traditional ballot.

The township is holding two advanced polls at sports complexes in Mount Forest on Oct. 8 and in Arthur on Oct. 15 from 10am to 3pm. Ballots can also be obtained at both advancing polling locations, or at the Kenilworth municipal office (7490 Sideroad 7 West).

Once the double-enveloped voting kits are received by the township, the signed declaration will be scanned and the ballot locked up.

On Election Day, starting at 2pm, staff will begin opening envelopes and scanning ballots with certified results to be available the next day.

The Town of Erin continues to use a vote-by-mail method, with voters able to mail kits to the town’s office (5684 Trafalgar road, Hillsburgh) until Oct. 13.

Later, kits will need to be dropped off in-person at the municipal office during business hours (8:30am to 4:30pm) or after hours at the available drop box.

Municipal office hours are extended until 8pm on Oct. 24.

Vote-by-mail kits are being delivered here this week.

Kits will contain four items, including a declaration (must be signed by voter), a ballot and two envelopes.

The deadline to mail ballots is Oct. 13.

Voting kits can also be obtained at ballot drop-off locations, and the township’s office (8348 Wellington Road 124).

Ballots can be dropped off at the following locations:

– Marden Community Centre and Rockwood Older Adult Centre on Oct. 22 (10am to 4pm); and