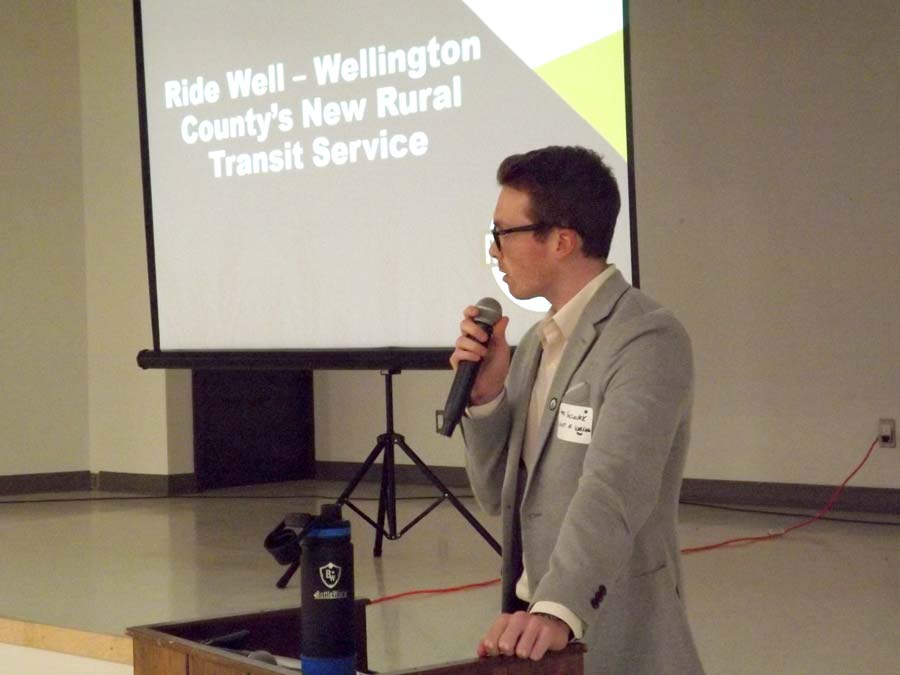 MOOREFIELD – Youth engagement, public transportation and progress on a circular food economy were among the topics on the agenda for a northern Wellington economic development meeting here on Sept. 18.

Municipal Youth Intern Erin Raftis, who spent the summer conducting a research and outreach program aimed at underserviced youth in north Wellington, provided an update on the project via video presentation.

The initiative was funded through a grant from the Rural Ontario Institute’s new Municipal Internship Program, designed to encourage municipalities to facilitate more youth engagement across rural Ontario.

“This project intended to research youth as an extremely important sector within our communities as they are our future leaders and vital to the longevity and  long-term success of our municipalities,” Raftis stated in the report.

Over the course of the summer Raftis identified and connected with youth aged 13 to 19, including a focus on those currently heavily involved in community clubs or organizations. Initiatives included:

– compilation of a list of resources available to local youth in the communities.

Conclusions included a determination that youth up to 15 feel fairly well served within the community, while those 15 and up feel there are fewer activities and opportunities available to them.

Raftis suggested initiating activities aimed at people in that older age group and using the term “youth adult” to describe them, as many don’t feel the term “youth” applies to them.

The report indicated young people would like to see more spaces where they feel comfortable “hanging out” with friends and more recreational and sporting opportunities targeted directly at their demographic.

A detailed report containing survey findings and conclusions was provided to the three municipalities for use in crafting a strategy to better address youth needs locally.

“Where do we go from here?” she asked. “We do need a youth strategy … There’s been a lot of great work that’s been done – we want to carry that on.”

On Oct. 1 the county is launching a demand-based, public transit service available to all local residents. The five-year pilot, funded by the provincial government, uses a “rideshare” model of operation. The county has partnered with a technology company (RideCo) to provide on-demand shared rides aimed at ensuring as many people with as few vehicles possible are getting to their destinations in a reliable way. It provides an alternative option to owning and using a personal vehicle in a rural setting.

By using Ride Well, “individuals can book a ride through a technological interface, much like Uber and travel anywhere within Wellington County,” said Vaclavek.

He explained that initially four dedicated drivers and vehicles will be utilized, with  the potential to expand to five vehicles in the third year of the pilot program.

He also noted accessible taxis will be used for persons with disabilities requiring rides.

While residents must be 18 or older to ride alone, customers between 13 and 17 can use Ride Well if a waiver is signed by a parent or guardian.

Vaclavek noted the county first recognized the need for enhanced rural transportation options in 2015, after a study conducted with support from the Rural Ontario Foundation revealed “there were gaps.”

In May, the city and county received a $10 million Smart Cities Challenge Award from Infrastructure Canada to implement their Smart Cities vision: Our Food Future, Canada’s first circular food economy.

Ellis noted the initiative now has a physical home, as a Smart Cities office was officially opened at 27 Douglas Street in Guelph on Sept. 3.

She reported the City of Guelph is currently finalizing a contribution agreement with Infrastructure Canada and project partner agreements with various stakeholders are being formalized.

The County of Wellington is expected to formally approve a structure for county involvement at the Sept. 26 county council meeting.

The program aims to accomplish three goals by 2025:

– 50 per cent increase in access to affordable, nutritious food;

– 50 per cent increase in economic revenues by reducing or transforming food waste.

Ellis pointed out exploration for additional funding opportunities is continuing.

“Because ten million dollars isn’t enough, we are exploring options for additional funding for this project.

“Ten million gets us what we proposed in this project and a lot of that money is already allocated to those specific goals,” she explained.