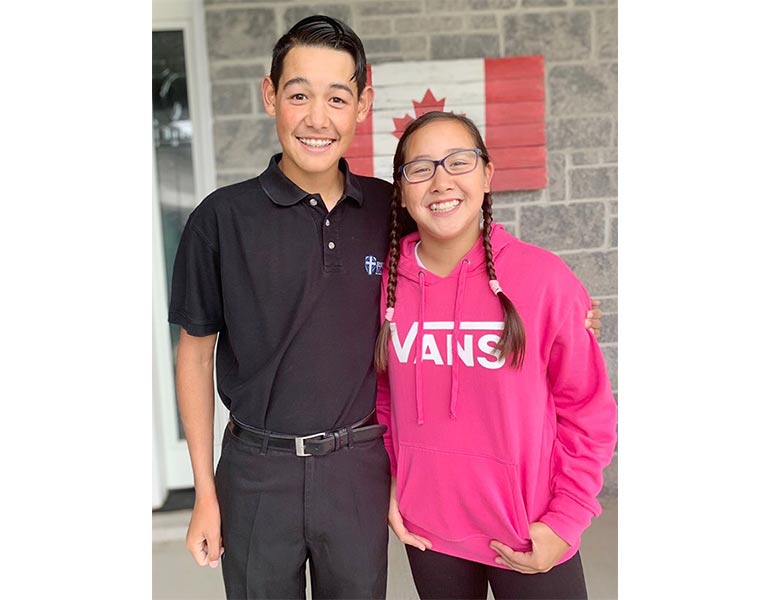 Nominated - Actors Zachary and Ashley Taylor of Rockwood have been nominated for Joey Awards.
Submitted photo

ROCKWOOD – A brother and sister from Rockwood are hoping their acting talents will be recognized when the Joey Awards are announced this weekend.

The Joey Awards gala will be held Nov. 16 at the Vancouver Playhouse, honouring the achievements of young people in film, theatre, television, music, commercials and web productions.

“It’s mostly fun, but at the end of the day it’s still work, and you have to focus on the job,” said Ashley, who signed with a talent agency, and has appeared on TV shows and commercials, both in Canada and the U.S.

She has acted in productions at Guelph Community Christian School and been a competitor on the CBC show Canada’s Smartest Person Junior.

Ashley is nominated in best female host or demonstrator, best reality or competition performance and best actress in a student- or youth-made short film age 10 to 12.

Zachary, a student at Bishop Macdonell Catholic High School in Guelph, said it can be difficult to keep up with school work when taking an acting job.

He was flown to Montreal for a day of work after being hired for a YOP yogurt commercial. The opportunity came up through his volunteering with Guelph’s Hope House, which provides assistance to people in need.

Ashley and Zachary have their own YouTube site where samples of their work can be played.

It includes a film called The Arcade, which resulted in Joey nominations for both of them.

They portray two players of a video game, while others are characters in the game. It was produced by film students at Earl Haig Secondary School.

“It was really professional, and having the premiere at a theatre was cool,” said Ashley.

She said acting experiences have helped her with public speaking, being centred and facing fears. Auditioning and not getting a part can be difficult, but she says, “Nobody will get the role that is made for you.”

In Canada’s Smartest Person Junior, she made it to the top 12, competing before a live audience in the show that aired nationwide in the fall of 2018.

While she didn’t win the competition, she had a great experience and “made a lot of good friends”.

She also starred in a provincial school bus safety video used to educate students and parents.

She said while it was a challenge to stand still for take after take while the film crew shot different angles, it wasn’t too difficult because the directors were very specific.

Zachary and Ashley are quite busy, since they are involved in other activities.

Zachary is flight sergeant with the 121 Red Arrows cadet squadron in Guelph, and this year received a scholarship for a glider pilot course.

Ashley is a cheerleader and a Navy League cadet, and was featured on youthofcanada.ca/spotlight.

She spearheaded the formation of Kids T.O. Kids, a non-profit group. With the help of Zachary, and their parents Sean and Sara Taylor, a group of young actors stages sponsored fashion shows that raise funds to build backyard playgrounds for children battling serious illnesses.

“Sean and I are very pleased they take ‘giving back to the community’ seriously,” said Sara.