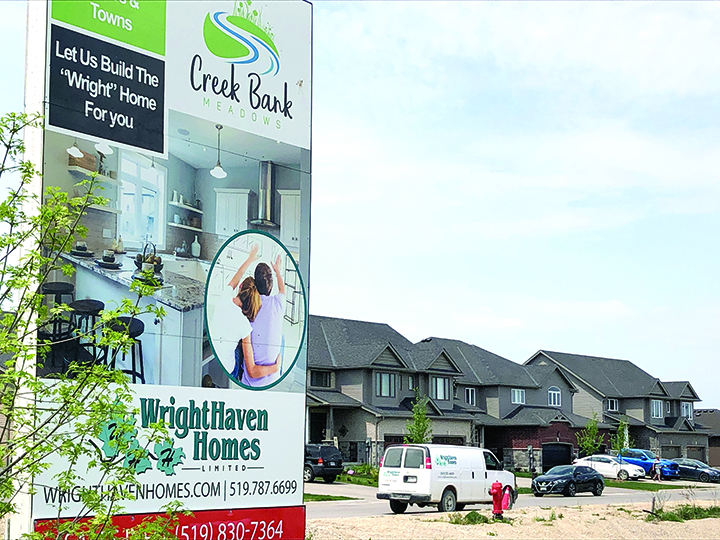 PALMERSTON – Minor variances were granted on two blocks of property in the Creekbank Meadows development here, clearing the path for construction of two townhouse buildings.

Developer Wrighthaven homes applied for a variance on a property at 101 Stephenson Way to permit the construction of a five-unit street townhouse with a reduced lot frontage, reduced minimum floor area, and reduced setback from the centre line of the street.

At a May 18 public meeting, Minto planning technician Ashley Sawyer explained the property is currently zoned site specific mixed use, which permits the construction of the townhome units, “but the developer is seeking some minor relief on a few items.”

A separate public meeting was held on the applicant’s request for similar relief for dwellings in a four-unit townhouse development on a property at 100 Stephenson Way.

Sawyer pointed out a minor variance application “for nearly identical relief” for townhouses in phase one of the development was approved by Minto council in 2018.

“At that time the Wellington County planning departments submitted an in-depth report and stated that they had no concerns with the relief as it maintains the general intent of the official plan and zoning bylaw.”

“This is a reputable builder, experienced, and housing is needed in the community,” said Sawyer, who noted the development and requested relief is in accordance with provincial policies.

“Town staff is recommending the committee receives the report and considers granting the applicant the requested relief,” she stated.

Developer Steven Wright explained the reasoning behind the request for reduced setbacks.

“We’ve been priding ourselves on developing some nice units that have a unique aspect, that being corridors, or access, from garages to the rear yards. That’s very important for home ownership because it allows us to sell these units as a freehold unit and it actually eliminates the access easements that would be required if we were to not have these corridors, from the garage,” he stated.

“I think that there is far better value for the access to the rear yard to prevent these easements at the back for property maintenance, for people to cross each other’s boundaries or lot lines to get to their access to the rear yards, which I know can be a particular problem for maintenance and municipal issues down the road and conflicts with property limits and lines and where fencing goes and it becomes a bit of a nightmare,” he added.

“I want to congratulate you on the subdivision so far,” said councillor Ron Elliott.

“Fantastic designs. You drive through that place and it’s hard to tell the difference between homes that are joined together and one that’s designed for one (family). It’s fantastic. You guys are great builders and I fully support what you’re doing here and I’ll support this minor variance for you.”

Deputy mayor Dave Turton said, “All those houses in there, they’re beautiful … I mean it’s amazing and I’m certainly in favour this as well.”

Neighbouring property owner James Shaw registered to speak during a public meeting, which was held via video conference, however he indicated his questions regarding the application were answered during the presentation.

However, said Shaw, “I just did have one question. I know it doesn’t have anything to do with the variance, but should the town maybe consider making mandatory solar … options on these houses? I know you have net zero houses, but this could be a good step for the communities to start insisting with the builders have solar on these houses.”

“James, you’re speaking my language,” Wright responded. “That is so encouraging to hear members of the public looking for those types of features or aspects of new housing.

“I am promoting and doing a whole community in the town of Elora that is exclusively net zero product; so, building to these higher efficiency standards which is called net zero-ready, and then it’s customer-driven to make the whole home net zero by the purchase of the solar packages that we offer for the homes. So it’s still an optional item because not everybody can afford the cost of solar.”

Wright added, “We’re still leaving it up to clients to make that decision, because it’s not for everybody’s budget of course. But making the home super energy efficient is, because it all makes sense.”

Motions to approve minor variances on both blocks in the development were approved following the public meetings.