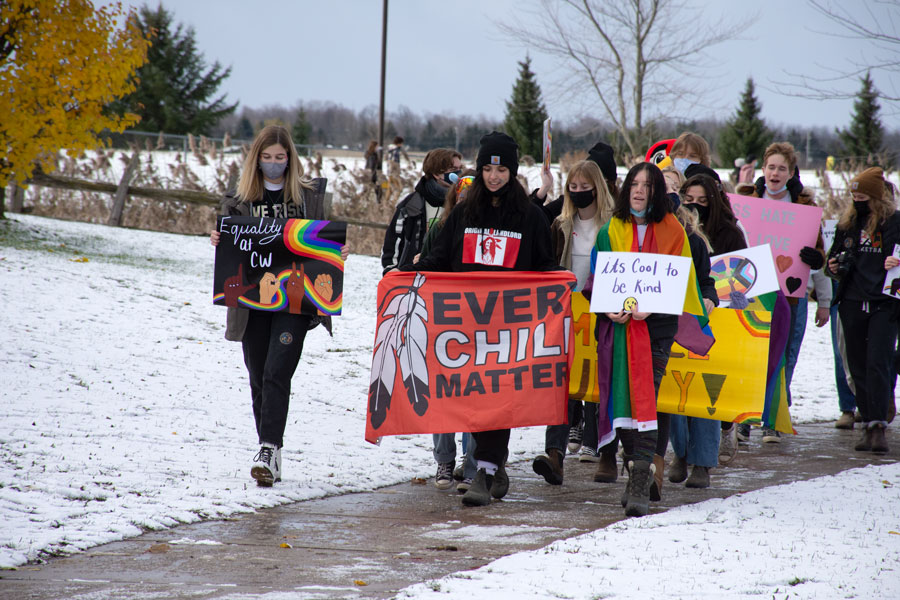 FERGUS – Students at Centre Wellington District High School walked out of class en masse Friday morning to show their support for trans, gay, bi, Black, Indigenous, and other marginalized students after several transphobic and homophobic incidents at the school, most alarmingly when a trans student was assaulted with a weapon by another student in October.

Carrying signs that read “Equity at CW,” “Embrace Unity,” and “it’s cool to be kind,” and waving Pride flags, students marched around the school chanting “Unity starts with You,” and “No justice, no peace.”

A few dozen community members, some carrying Pride flags, lined up on the sidewalk in front of the school to show their support as well.

The event was planned by the Student Action Committee with the support and participation of teachers and administrators.

“I encourage student action when it’s positive,” said principal Jennifer Meeker as the march ended and students returned to class. “And it’s nice that community members came too.

“This is giving me energy today.”

Alina Uddin and Abby Graham are Grade 12 students and are part of the organizing committee. 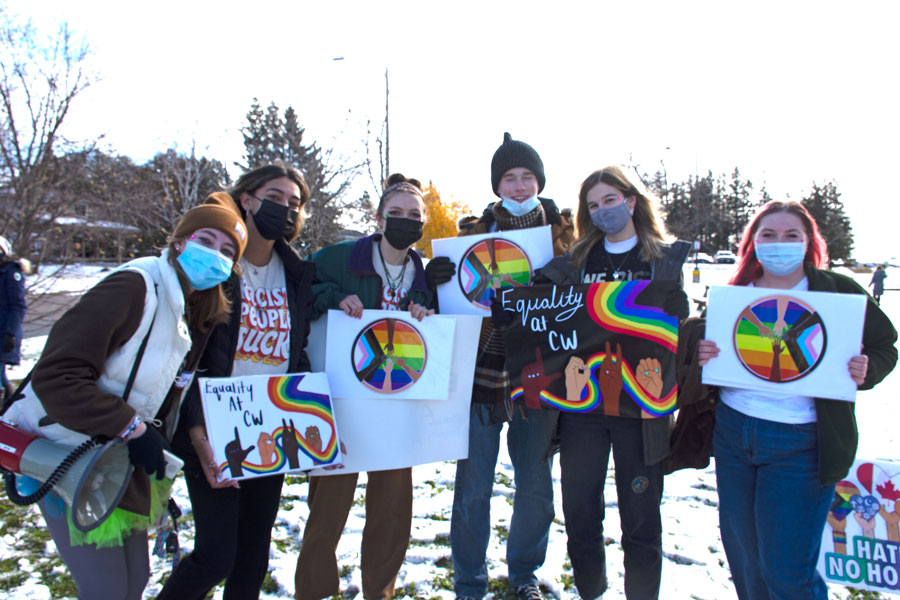 These students helped organize the unity march at CWDHS on Nov. 19 in response to increasing transphobia and homophobia at the school. Photo by Joanne Shuttleworth

In an interview before the march, the students said they were alarmed and upset when they learned of the Oct. 7 assault.

“When I found out about the incident, I said to my friend, we need to make a change,” Uddin said.

“Discrimination has always been at our school a little bit, but never this kind of violence.”

Uddin said she never encountered discrimination herself until she started high school.

“I was the only brown girl in elementary school, but it was never a problem before high school,” she said.

“I’ve had racial slurs before, but for the longest time I thought it was only me. Now to see so many students dealing with this, it makes me sick to my stomach.”

“I’ve never seen it escalate to this level,” Graham agreed. “There have been so many police visits to the school.”

They felt compelled to do something and with help from a teacher, called a meeting of like-minded students.

“At our first meeting we had a full classroom, such immense support,” Uddin said.

They decided to call it a unity march rather than a student walk-out to be more positive and similarly changed their slogan from ‘abolish hate’ to ‘embrace unity and celebrate diversity.’

The school brought in community builder Orlando Bowen from One Voice One Team, to offer insights and set realistic expectations for the organizing team.

“He talked to us about empowerment and confidence,” Uddin said. “He told us it won’t be an instant change, but no matter what happens (at the march) we have made a step. We came together and that is a change.”

Graham said she hasn’t witnessed any violent incidents first-hand, but there is increasing tension among students – especially when they see ambulance and police cruisers in front of the school.

They both scoff at the suggestion that the incidents of violence at school are the result of COVID-19 and lockdowns.

“I was in lockdown as much as everyone else and I’m not assaulting people,” Graham said.

“And we really don’t know the magnitude of it,” Graham continued. “Most of these kids are also getting harassed online every day.”

Graham said students have been told to stand up to discrimination and she herself is passionate about social justice.

“But it can be quite isolating at school to call these people out. So many people don’t care about social justice. It does feel lonely when you do it.

“But there are people who care and with the Student Action Group, it was truly incredible to see people come together to combat hate.

“And that really is the message of the walk. We want to be positive, to pull us out of the negative.”

Grade 12 student Gordon Wilson said at the march that the violent incidents in the school are upsetting.

“When I heard about it (the Oct. 7 assault), I cried. It’s a rough topic – really heartbreaking,” he said.

Grade 11 student Nate Jensen said that he’s proud of the students for taking a stand.

“Everyone is ecstatic,” he said. “Today I’m proud of my school.”