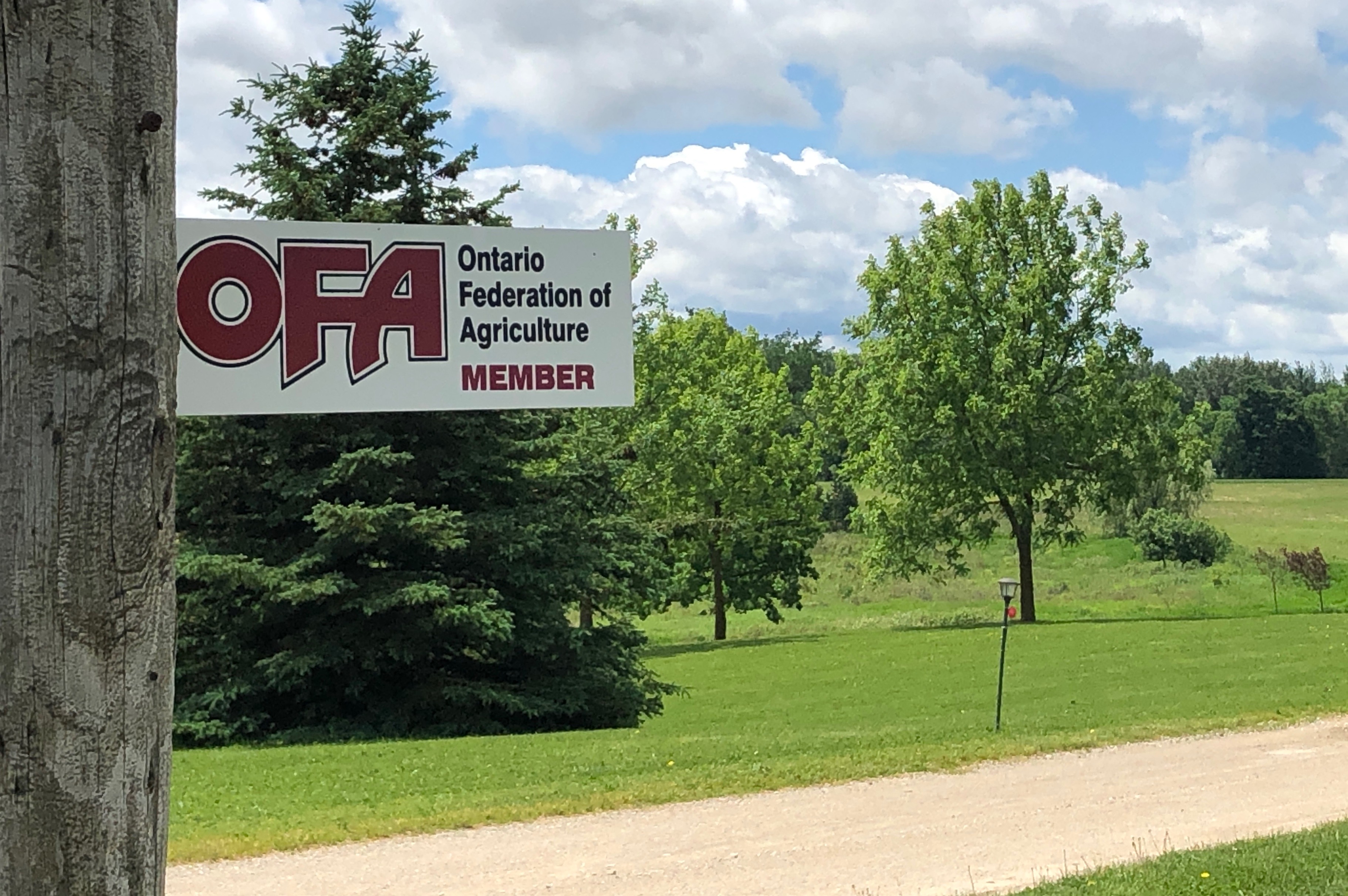 WELLINGTON COUNTY – The Wellington Federation of Agriculture (WFA) is pushing back against a resolution circulated by the Township of Mapleton calling for the province to undertake a review of the Farm Property Tax Class Rate Program.

The resolution, originally passed March 10, has received the support of numerous Ontario municipalities, but so far only Puslinch among councils in Wellington County has signed on.

On May 26, Mapleton council directed staff to recirculate the resolution, noting that it was passed just as municipalities were beginning to deal with the COVID-19 pandemic and may have been overlooked.

Minto town council took no action and did not discuss the recirculated resolution which was on the agenda for its June 6 council meeting.

Also on the agenda at the meeting was a letter from WFA president Janet Harrop, which stated any policy solution involving a return to the former farm rebate program to fund rural municipalities “is deeply flawed and counterproductive.”

Prior to 1998, properties assessed as farmland paid 100 per cent of their assessed tax to municipalities, then filed an application with the province to receive a 75% rebate, paid directly by the province.

Since then, farmland has a tax ratio of 25%, meaning farmers pay property tax on only 25% of the assessed value of their property.

Many municipal officials interpret that as meaning costs that were once shared province-wide now fall on the non-farm municipal tax base.

“The Farm Property Tax Class was introduced in 1998 as part of reforms in Ontario’s property tax system. This change was not done in a vacuum; it was one factor in a complete change in municipal finances in Ontario,” states Harrop in the letter.

“Other changes included the creation of other property tax classes, creation of MPAC (known at the time as OPAC) and a move to current value assessments.

“In addition to these changes, the province realigned service delivery and uploaded certain services from the municipalities and downloaded other services. The province also introduced the Ontario Municipal Partnership Fund (OMPF), which has been cut significantly in recent years.”

Ontario Federation of Agriculture (OFA) senior policy analyst Ben Lefort said the cuts to OMPF, which provides direct funding municipalities can designate as they see fit, are the source of much of the friction on the farm tax issue.

“That program has been a major irritant for sure, for everybody,” Lefort told the Advertiser in a June 10 telephone interview.

“And multiple governments have been cutting that back and reducing it significantly,” Lefort told the Advertiser in a June 10 telephone interview.

“What happened was they cut back the OMPF, but at the same time they uploaded these different social services from municipalities and the province said, overall, municipalities are financially better off from this, which in the aggregate is true.”

However, he added, “municipalities like Mapleton – lower tier, rural municipalities – were not better off because they were not delivering many of the services that got uploaded.

“So they didn’t directly benefit from the uploads, but they were the ones that took it on the chin in the OMPF … that’s really what’s been driving this issue the last few years.”

Harrop and Lefort both noted the farm organizations support the idea of a better direct funding model for municipalities, just not a return to the previous tax rebate system.

Harrop is worried current framing of the issue by municipalities is creating the false impression that farmers are getting a tax break at the expense of their neighbours in urban areas of the county.

“We’ve done a lot of work to try to lessen the urban-rural divide and I’m just worried with this resolution gaining a lot of traction that it’s going to be, ‘Oh look, I’m paying such high taxes on my house because the famers are getting a break’ and I don’t want to create that environment, because really we’re paying more taxes than the services that we use,” said Harrop.

Lefort explained that a 2014 Cost of Community Services case study, done for the OFA in the municipality of Bayham, revealed the cost of providing services for farmland amounted to about 50 cents for every tax dollar paid by farmers.

Meanwhile, residential taxes didn’t cover the cost of residential services, with $1.05 spent by the municipality for every dollar taken in in taxes.

Roads and bridges are the “primary drivers” of farmland service usage, said Lefort, noting that vacant farms also generate some requirement for policing and fire protection, but does not contribute to the need for many other services municipalities provide.

Both Lefort and Harrop pointed out farmers pay full residential taxes on their residence and one acre of land, with only the “vacant” land taxed at the 25% rate.

Lefort noted many farmers also pay commercial tax rates or industrial rates for portions of their property used for retailing, manufacturing or other non-farm businesses.

He explained that, largely due to ballooning assessment on farmland, farmers are paying an ever-increasing share of the local tax bill.

The numbers, he said, clearly show residential taxes are not subsidizing farmland.

“If you actually look at the numbers in Wellington County and most rural counties where there’s a high proportion of farm land, the numbers speak to exactly the opposite, where farmers over the last 20 years and especially the last 10 years, they’ve been shouldering more and more of the local tax burden and assessments have been going up and up,” Lefort stated.

“So it also strikes me as an odd time to come out and say that farmers are being subsidized on their tax bills, when their tax bills have more than doubled since 2012,” he continued.

“In 2012 in Wellington County farmers were paying a little over 4% of the total tax levy in the county and by this year, 2020, that will be approaching 8%. And that is a direct benefit to the residents. In a zero sum game there is only 100% of taxes being collected, so we have an extra 4% of that is being collected from the same number, or fewer number, of farmers.

“That’s’ a direct benefit to every other property classification – residential, commercial, industrial – in the county.”

Lefort noted the rebate program required a lot of administration.

“Basically OMAFRA, one of their primary functions was administering this rebate program and a lot of staff was dedicated to this program,” Lefort stated.

“So why, again if the goal is to get more funding to municipalities, would we do it in a way that adds so much administrative cost and bloats OMAFRA’s budget without really adding any value?”

Pointing out the former rebate system is “the kind of program that the current government has indicated it really has no interest in,” Lefort stated, “It’s the kind of thing that’s unlikely to happen in the first place.”

The former system, Lefort said, also presented cash flow issues for some farmers, who “would need to basically increase their property tax bill by 400% and then wait for the province to send the rebate, whenever that might be.

“There was a lot of issues year to year within the program when it was running, of eligibility criteria and farmers not getting the rebate and kind of a moving target in terms of eligibility for the program, and it caused a lot of headaches and situations where farmers were paying the full residential rate with no rebate.”

Harrop agrees local municipalities, particularly those with a high percentage of farmland, need more help from the province.

“The OMAFRA dollars that should be coming from the province to make up the difference in those infrastructure dollars are not coming to those lower tier municipalities,” she told the Advertiser.

“So then a municipality like Mapleton … they just have Moorefield and Drayton as an urban centres, not a lot of people – they have a huge agriculture component so they don’t have the residential tax base to make up the difference, so they’ve been really struggling.”

Lefort said its unfortunate municipalities are focussing on the discontinuance of the former farm tax rebate program as the source their funding woes.

“They need more funding from the province and that’s something that OFA is completely in agreement on.”

“It’s just that suggesting returning to the rebate program as a solution is something that we can’t get on board with.

“We’ve proposed to work on direct funding from the province to rural municipalities, so my hope is that we’ll be able to work with municipalities together on that, because if we work together I think our chances of getting something done are significantly higher.”