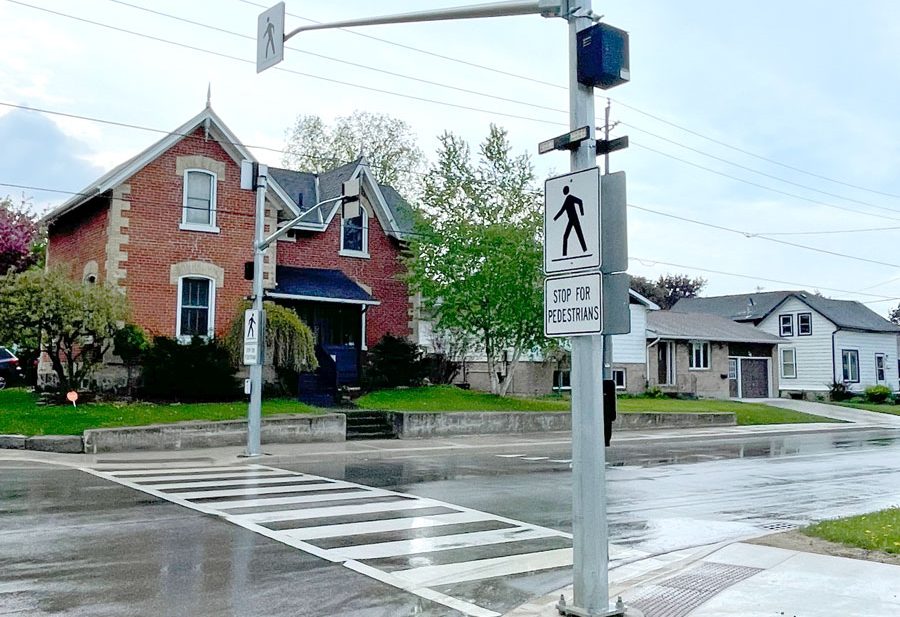 Wellington North is hoping for a green light from the province to install pedestrian crossing infrastructure at three intersections in Mount Forest and Arthur. The crossover above is in Minto. Advertiser file photo

KENILWORTH – New pedestrian crosswalks, signage and flashing lights could be coming to an intersection near you.

Wellington North is hoping for a green light from the province to install pedestrian crossing infrastructure at two intersections in Mount Forest and one in Arthur after council recently approved engineering reports to be sent to the Ministry of Transportation.

Though the township is the “road authority,” each intersection lies along a provincial “connecting link” – Highways 6 or 89 – and the province must review and approve all traffic control devices before installation.

In 2019 and 2021, Fergus-based Triton Engineering Services Ltd. assessed four locations to determine if traffic lights or pedestrian crossings could be justified.

In letters to the township last year, Triton engineers concluded all four locations would benefit from the installation of what’s known as a “Level 2” “Type ‘B’” crossover — essentially a “piano-key” painted crossing on the roadway, overhanging pedestrian crossing signs, and flashing beacons activated with a push button.

However, in a recommendation to council by township staff, the Main Street South and King Street East intersection was not put forward for consideration, causing some councillors to question the decision.

At a Jan. 16 meeting councillor Penny Renken requested some sort of protection, if only a sign, considering a pedestrian was struck at the intersection several years ago.

The intersection, she said, is chaotic at the best of times and she doesn’t believe it’s safe.

“That’s part of the reason why we started talking about pedestrian safety, particularly in the downtown (Mount Forest) core,” Burke remarked.

“I tried to put forward the ones that I thought were most important,” township operations director Matthew Aston said, conceding the downtown location “makes a lot of sense” for a crosswalk.

Installing infrastructure will cost the township around $120,000 at each location.

Mayor Andy Lennox asked council to endorse the recommendation regardless of any misgivings.

“We can proceed with these … and then do some further research and diligence into what the options might be at King and Main for [the] future,” Lennox said.

The mayor also noted any projects would need to be approved through the budget regardless.

“These are significant investments and we may not be able to do them all at once,” he said.

Council voted in favour of the recommendation, and the Triton reports will be sent to the province for review and approval — a process which can take several months.

In the meantime, staff have been instructed to come back to council with recommendations (likely to echo those already put forward in Triton’s report) for Main Street South and King Street East.

Triton’s review of that intersection lasted eight hours in July 2019 and engineers recommend the same infrastructure as the other three intersections with a report stating, “a [pedestrian crossover] at this location is expected to improve driver awareness of pedestrians crossing and improve pedestrian safety.”

The report also suggests some adjacent parking spaces may need to be removed to “provide sufficient sight distance” for people crossing.

The Durham Street and Main Street North intersection in Mount Forest was the only one found to be a potential candidate for intersection pedestrian signals (the illuminated walking person light) to help control movement and enhance safety, considering the the amount of vehicle and pedestrian traffic.

The report recommends against the lights for now, but suggests further growth may justify their installation.

The intersection was also found not to be compliant with the Accessibility for Ontarians with Disabilities Act (AODA).

“The existing conditions of the intersection do not meet current AODA accessibility standards for pedestrians,” a Triton report states.

“Improvement of the pedestrian travel paths with respect to accessibility will help to control pedestrian movement though the intersection and enhance pedestrian safety.”

Signed for school crossing, the intersection was also found not to be painted with the proper markings and it would need to be updated to be in compliance with provincial legislation.