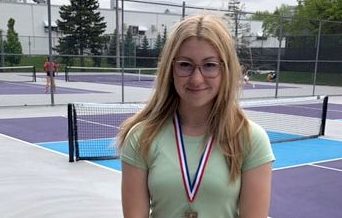 The Grade 11 student claimed the championship title on May 20 at the Greystone Racquet Club in Waterloo.

“The girl I played was really good,” Herrington said. “But I just really tried to persevere and because I was playing not only for myself but for my school as well, which is something I’m not used to when playing a tournament, I tried to use that as motivation.”

Herrington initially qualified after winning the District 4 and District 10 Girls Singles Open category in October at the Erin Tennis Club.

She will now represent Wellington Heights at the provincial OFSAA championships May 30 to June 1 in Toronto at York University.

“I’m so excited,” Herrington said ahead of competing in the OFSAA championships.

“This is honestly my first time at OFSAA, so yeah I’m really excited to represent my school at the event that I’ll be in.”

The Wellington Heights student is no stranger to the game. Herrington told the Advertiser she’s been playing tennis since she was about five years old.

While she’s tried her hand at playing doubles, Herrington said she prefers to play singles on the court.

Herrington first competed in Grade 9, winning CWOSSA but the OFSAA championships were cancelled due to the pandemic, and she didn’t get the chance to compete.

Asked how she’s been preparing since qualifying for CWOSSA in the fall, Herrington said “I’ve been training usually three to four times a week, and I’ve been playing tournaments almost every weekend.”

During her time competing for the school, Herrington said her school has been very supportive of not only her drive for playing tennis, but also her roles on the school’s volleyball and basketball teams.

After high school, Herrington hopes to get either a Division I or II scholarship to an American university, she said.

“I’m really excited,” she said of heading to OFSAA. “And also, I feel ready.

“I know most of the girls that are in it that I’ll be playing and I’m just super excited for the tournament to begin.”