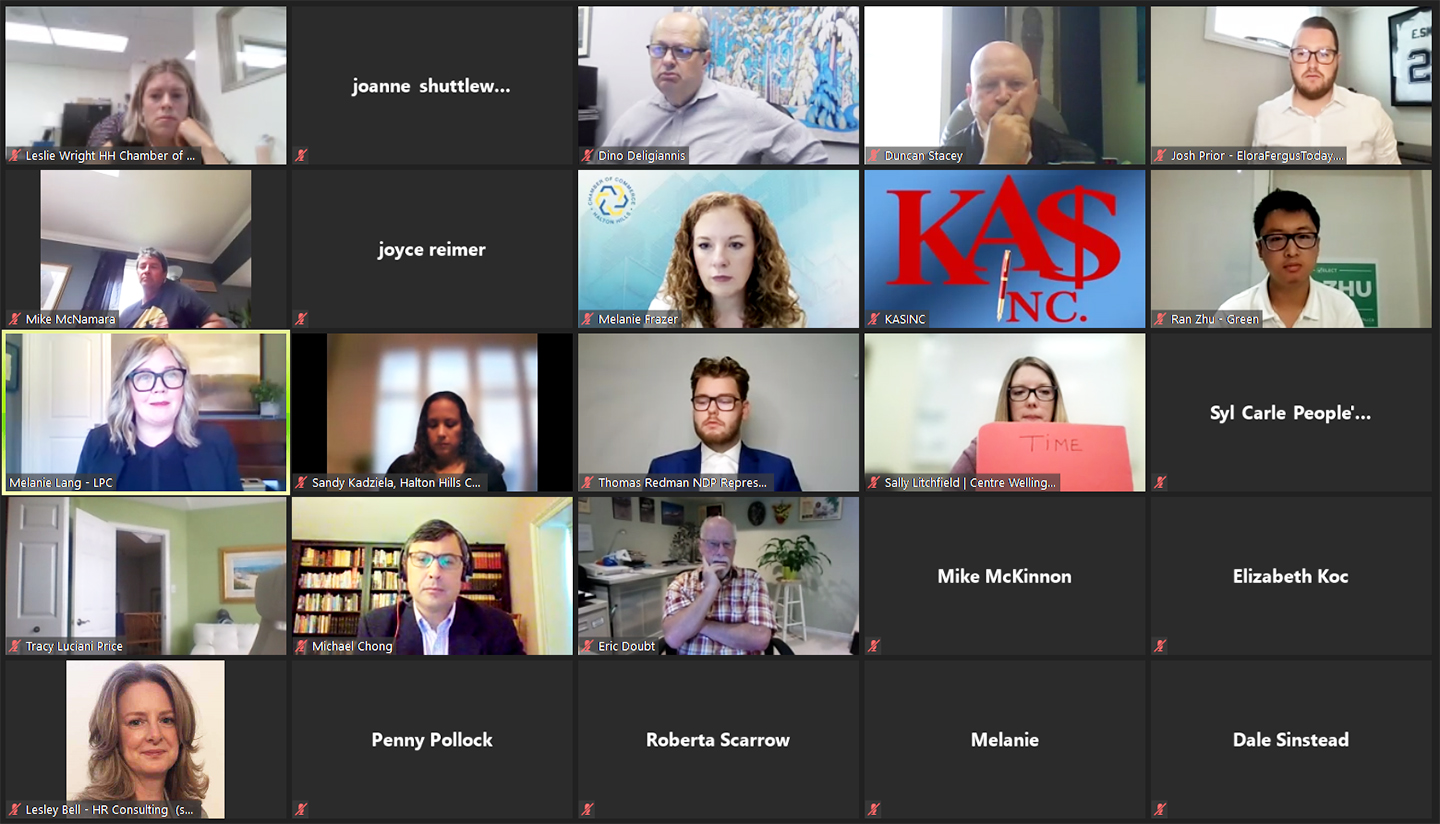 WELLINGTON COUNTY –  It’s not surprising that in a debate jointly hosted by the Centre Wellington and Halton Hills chambers of commerce, most of the questions posed to candidates had to do with helping small businesses overcome the impacts of the pandemic and lockdowns.

The virtual debate on Sept. 9 had candidates answering questions about recovery funding for small businesses, how to resolve labour shortages, and affordable housing, which adds to labour shortages when people can’t afford to live near their workplace.

All of the candidates believe government has an important role to play in the country’s recovery from COVID-19 – except Carle, who believes government is only getting in the way of private enterprise.

“Government needs to get out of your way. We will enable you to hire people to grow your business … and will phase out programs that enable workers to stay home.”

Carle said his party is opposed to mandatory vaccines and vaccine passports.

“We have to learn to live with this virus,” he said.

“We support vaccine programs that relieve public health issues. But we stand for choice.”

Chong said the Conservative’s Canada Recovery Plan will recover the one million jobs that were lost during the pandemic within a year and balance the budget within a decade.

The party’s platform will offer loans up to $200,000 to small businesses and will invest $1 billion into the restaurant, hospitality and tourism sector.

“We need a government that thinks about fiscal policy. It’s clear there’s been a distortion in the marketplace. It’s a problem across the country and requires strong fiscal and monetary policy,” Chong said.

Redman, speaking for Jahingir, said the NDP will create one million new jobs, increase minimum wage to $20/hour and ensure workers have a minimum of 10 paid sick days a year.

“We need a prime minister who will stop protecting big companies and billionaires,” Redman said.

“Billionaires have gotten richer while people struggle to get by.”

Redman said the NDP would impose a wealth tax and an excess profit tax and invest that revenue into pharmacare, childcare and affordable housing.

Lang said the number one priority for the Liberals is to finish the fight against COVID-19, noting widespread vaccination will allow businesses and the economy to fully open.

But along with that, the party has proposed a $10/day national childcare plan that will allow women to re-enter the workforce.

She said the Liberals have a plan to re-skill workers into the green economy and to retrofit old buildings to be energy-efficient.

“To have job growth we need green growth,” she said.

Lang said it will take collaboration on many fronts to steer Canada out of the pandemic and back on solid footing – collaboration with provincial and municipal governments, with the private sector and with other countries.

Zhu said the Green Party will cut the red tape for small businesses trying to access recovery grants and loans, add extra wage and rent subsidies and hold the tax rate to 9 per cent.

He added the Greens will retrain those in the oil and gas business to prepare them for the new green economy.

“Climate change is here,” he said. “We need bold action. It goes hand-in-hand with the economy.”

Redman stated the NDP “has a plan to build half-a-million units of healthy, affordable housing. We’ll make houses homes – and not for foreign investors.”

Carle said, “The federal government is pushing for more growth and immigration, but locals don’t want the growth … Getting government involved is not the solution. The private sector can supply the housing we need.”

Lang described the Liberals’ new program: a tax-free savings account for first time buyers to make it easier to save for a down-payment along with a rent-to-own plan.

Chong stated, “We will help build one million new homes in three years, examine the government’s real estate portfolio and release 15% to housing.”

Zhu said the Green Party “would charge an empty home tax on foreign owners and redefine and reinvest in affordable housing.”

Carle said when it comes to broadband, “The answer is with the CRTC – the government is in the way. Open the market, increase competition and bring prices down.”

Stated Zhu: “There’s a poor business case for the private sector to bring (broadband) to rural communities. So we need to establish baseline service across Canada. Canada should consider satellites for this purpose.”

Chong explained the Conservatives would work to increase competition in telecommunications to bring costs down. “We will ban Huawei in our 5-G network. We consider them a security threat,” he said.

Redman said the NDP would put a price cap on cell phones and internet service and turn high speed internet to a Crown corporation.

The debate is to be posted for viewing on both chamber websites.