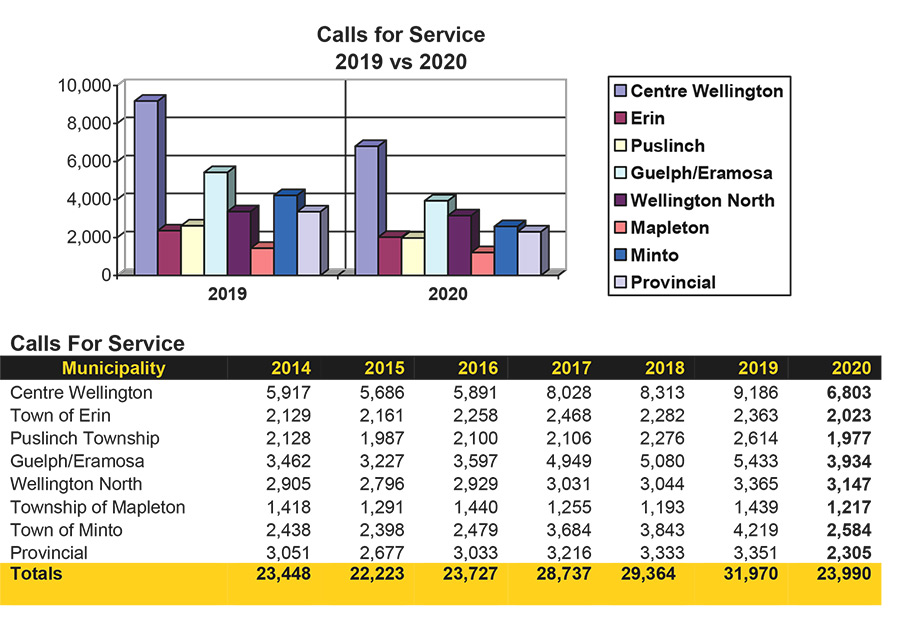 WELLINGTON COUNTY – The number of calls for OPP assistance dropped substantially across Wellington County in 2020.

Police responded to 23,990 calls last year compared to 31,970 in 2019, according to a year-end report presented to the County of Wellington Police Services Board on Feb. 10. The total is the lowest since 2016, when Wellington County OPP received 23,727 calls for service.

The report from Inspector Paul Richardson, Wellington OPP detachment commander, notes 911 calls dropped dramatically in 2020, with only 568 calls received compared to 3,776 in 2019.

The report indicates the 2019 figure was substantially higher than the previous two years, as 1,760 calls were received in 2018 and 1,297. In the fall of 2019, local OPP initiated a public awareness campaign to reduce the number of accidental 911 calls from cell phone users.

Richardson said the reduction in 911 calls could have resulted from “complementary efforts in respect to public education and internal practices.”

In an email to the Advertiser he stated, “The OPP encourages the public to use 2-1-1 in an effort to connect with non-emergency community health and social services in our area, which leaves 9-1-1 for response to life or property threatening emergencies.”

Richardson said that internally, the OPP experienced just under three million 911 calls between 2014 and 2019 and about 400,000 of those were  accidental, unintentional or unknown situation 9-1-1 “hang-up” calls.

“When the accidental, unintentional or unknown hang-up calls are received, our PCC (Provincial Communications Centre) communicators can exercise discretion to divert those calls when it is confirmed that no emergency exists,” Richardson stated.

“The diversion … ensures that officers are available for confirmed emergencies and community service.  The reduction of 9-1-1 calls can at least, in part, be attributed to these two efforts which ensure the necessary response to emergency situations.”

Richardson said he feels the change in numbers are part of a cyclical ebb and flow of different types of activity.

There was an increase in some types of calls in 2020. The number of domestic disputes dealt with by police rose from 452 to 494. There were nine robberies in 2020, compared to two in 2019 and the number of sexual assaults reported went up from 56 to 59.

“Our communities are still immersed in the lockdown amid ongoing efforts to combat the COVID-19 virus. It is difficult to establish the nexus between particular calls for service and how they are influenced by COVID-19 while the pandemic continues.  It is too soon to draw any conclusions or attribute any trends during the near term,” he stated.

“It is difficult to definitively attribute certain specific crimes with COVID-19 as a causal factor without proper analysis, which will take time.  As we emerge from COVID-19 and determine what our new normal is, we will be better positioned to analyze the impacts to our community,” the inspector added.

The number of drinking and driving-related charges issued was also down in 2020. In 2020, police made 11,476 stops through the Reduce Impaired Driving Everywhere initiative, compared to 26,247 in 2020. Police conducted 196 roadside breath tests last year, down from 284 the previous year.

The report indicates the Wellington County Street Crime Unit (CSCU) had a “busy and productive” year.

Investigations by the unit in 2020 led to the seizure of large quantities of methamphetamine, fentanyl, and cocaine “as well as the discovery and dismantling of a dangerous and volatile methamphetamine lab in the southern part of the county,” the report states. Collectively, the team laid over 75 criminal charges and put numerous accused before the courts who are believed to have been supplying illicit drugs in the community.

“Throughout the year, the CSCU investigated a number of fatal and non-fatal opioid overdoses.

“Three CSCU investigations targeted suspects who had trafficked fentanyl to persons in Centre Wellington and Rockwood, who had overdosed on the dangerous drug fentanyl,” the report states.

The street crime unit also investigated the theft of nine brand new trucks from a local dealership in Fergus earlier this year.

The extensive investigation assisted an ongoing project by the Peel Regional Police Auto and Load Theft Unit, which led to the execution of numerous search warrants in the Greater Toronto Area (GTA), the recovery of stolen vehicles and the arrest of 20 people suspected of involvement in targeting new, high-value vehicles throughout the GTA and surrounding jurisdictions.

Of the 20 people arrested, five had been involved in the theft in Fergus, the report notes.