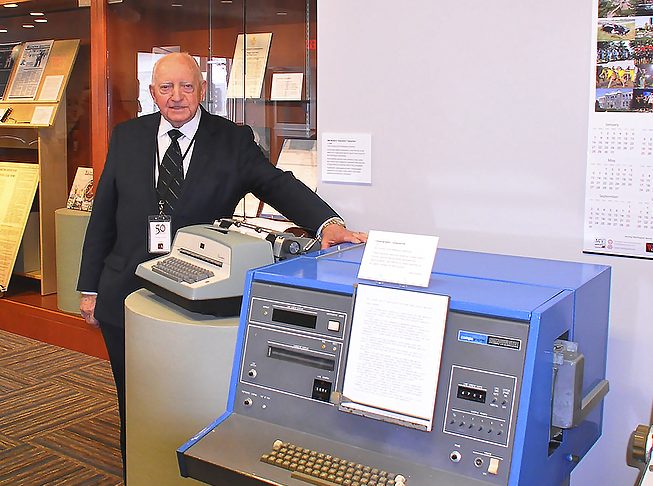 Wellington Advertiser founder Bill Adsett poses with some old newspaper equipment that was part of a 2018 exhibit at the Wellington County Museum and Archives recognizing the newspaper’s 50th anniversary. Advertiser file photo

GUELPH/ERAMOSA – Residents here and across Wellington County have lost one of their community’s greatest ambassadors.

William Hugh Adsett, known to most simply as Bill, died on Oct. 5 at Caressant Care in Arthur after a brief illness and following a battle with dementia.

“Bill was raised in Wellington County and over the course of his life he contributed greatly to the community … he will be greatly missed.”

Described as a funny, sensible and caring man, Bill was well known across the county as a former politician and the founder of the Wellington Advertiser.

“This is a great loss to the community,” said friend Senator Rob Black.

He added Bill was a strong leader with vision and a man who cared immensely about Wellington County.

“He cared deeply about and supported our local community organizations, seeing them as vital to the strength of our communities,” stated Arnott, who has been friends with Bill for decades.

“He will be greatly missed, but never forgotten.”

Prior to moving into Caressant Care in Arthur in April, Bill lived his entire life in the same home in which he was raised, on a farm in former Eramosa Township.

The eldest of Hugh and Ethel Adsett’s two sons, he was born in 1935 and attended Luttrell School S.S.#6 Eramosa before moving on to Guelph Collegiate Vocational Institute (GCVI) for high school.

After graduating, he worked a few jobs before enrolling in the Ontario Agricultural College at the University of Guelph.

He graduated in 1959 and was involved in farming for much of his life. But when commodity prices took a hit, he decided to try other things, including a stint with Texaco in Hamilton, working construction on Wellington Road 26 between Wellington Roads 124 and 18, selling life insurance and a position with the nation’s Royal Commission on Farm Machinery.

Bill was first elected to Eramosa Township council in 1968, largely on the strength of his disagreement with the initial site chosen for Eramosa Public School, which his children and two of his grandchildren would eventually attend.

He served on Eramosa council from 1968 to 1982, the final seven years as reeve, and served as warden of Wellington County in 1981.

Arnott said Bill’s “thoughtfulness, decency and respect for others defined his record of leadership” as reeve and warden. 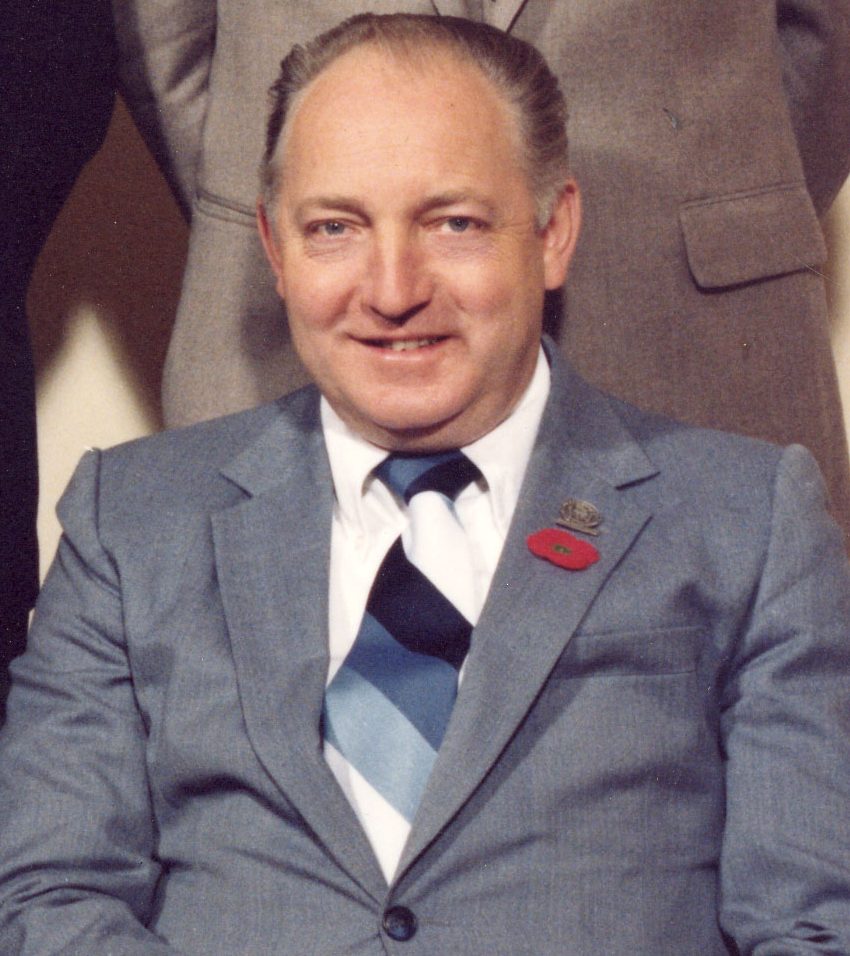 During his years in office, he helped bring water and sewer services to Rockwood, brought improvements to Wellington Place, endorsed the new Wellington Road 7 bridge over the Elora Gorge and took pride in the renewal of the Wellington County administration centre in Guelph, a project he championed from concept to completion.

“He made educated decisions, and not easy or popular ones,” said daughter Marie.

“But long after his political life he was admired for his approach and vision and his unwavering intention to make life better in the community and county he was proud to call home.”

Current Guelph/Eramosa Mayor Chris White said Bill’s dedication to his community was at the forefront of everything he did. When White was first elected mayor in 2006, Bill led him on a tour of the township.

“He was showing me all the bridges and the roads and explaining the history and he was very passionate about the community,” White said.

“It just showed then and there that he was a man who … would take the time to help someone relatively new to the game explain how it works so we could carry on the good work that he’d been doing.”

Chong said he is “forever grateful” for the advice Bill provided over the years.

“He always conveyed his wisdom – accumulated over decades of experience – in a quiet, unassuming way,” Chong stated.

“That advice and perspective has been invaluable to me as I’ve navigated federal politics over the years.”

Black said he, too, was often the recipient of great political advice from Bill.

Having grown up on a farm near Fergus, Black said his family always knew the Adsetts, but he came to really know Bill in 2000 while they both served on committees for the International Plowing Match that year.

“Then, as I became involved in county council, Bill checked in with me and offered sage advice. I always appreciated that,” Black said.

“And he was among the first to congratulate me when I became a senator (in 2018).”

Bill is perhaps best known as the founder of the Wellington Advertiser.

The first eight-page issue of the Fergus and Area Shoppers News was published on March 12, 1968. The name was soon changed to The Wellington Advertiser and circulation was expanded to include the entire county.

“He had a vision for this paper,” said Black. “Despite the ups and downs, 53 years later the paper is still a weekly essential for the community. I take three copies to Ottawa for people there.”

Black added, “Bill has instilled in his family and colleagues that mentality of getting the work done.”

In a 2018 interview to commemorate the Advertiser’s 50th anniversary, Bill said much like his move into the political arena, the decision to start the newspaper was rooted in a “sense of community responsibility” and a desire to educate people about municipal politics and processes. 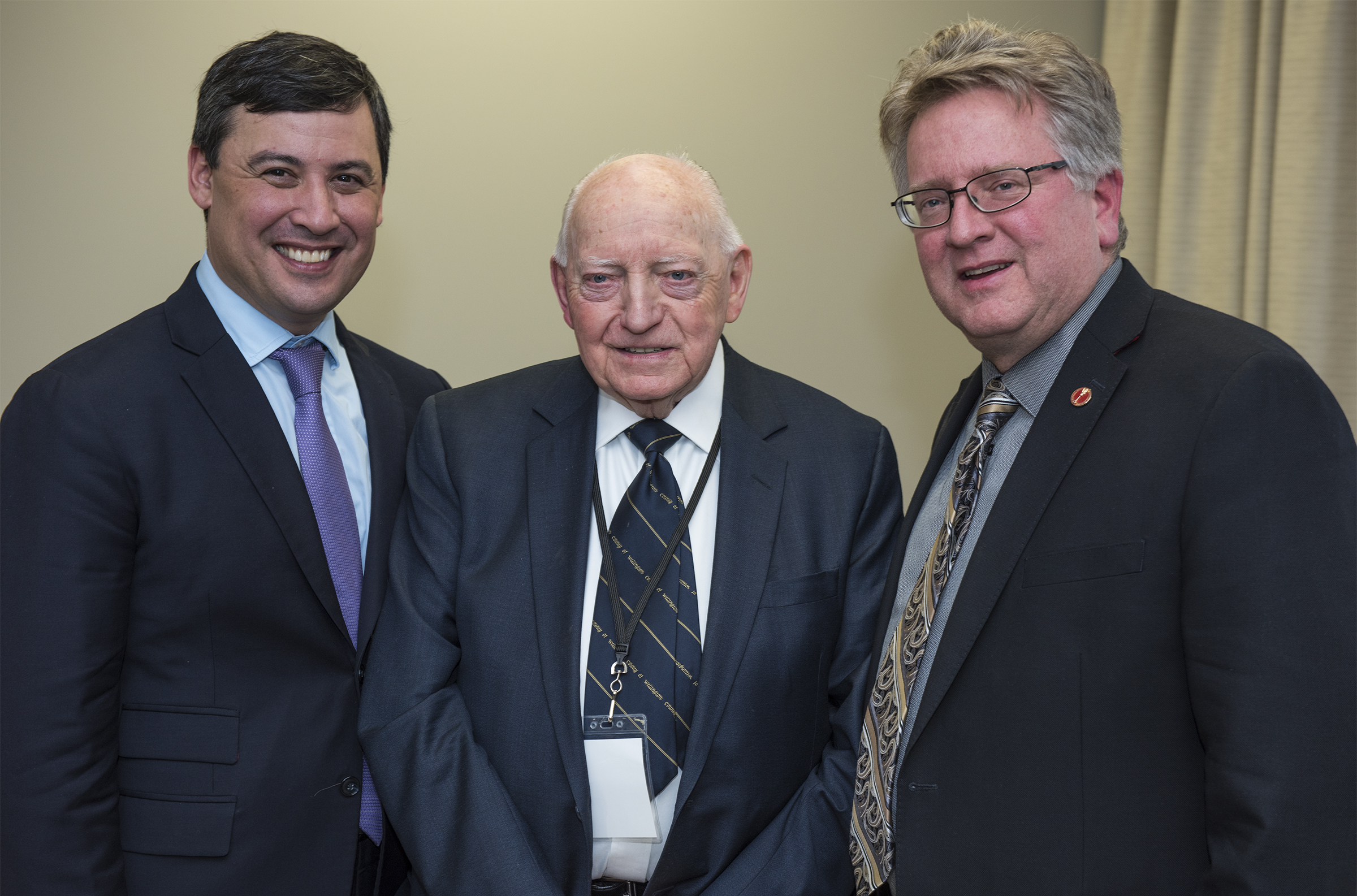 The business was started out of the front seat of Bill’s car. At the outset, he would sell ads, take copy to the printer, ensure delivery and then take the final product himself to post offices throughout the county.

That was, of course, in addition to his roles on township and county council, and juggling his family life and other commitments.

At home, Trudy manned “the Rockwood office” phone line, bagged papers and prepared them for the mail and booked ads over the phone. She also raised their three children.

Kirk and Marie helped out at the newspaper at various points in the business’ history and David took over as general manager in 1992.

In 1971 Bill purchased the Community News, a small newspaper in Drayton, from friend Gerrit Wimmenhove.  The paper has evolved into the North Wellington Community News and now serves all of northern Wellington County, including Minto, Mapleton and Wellington North.

Despite many changes and challenges over the years, including various moves and technological advances, Bill’s vision for a free newspaper for everyone in Wellington County, as well as a separate publication  dedicated to the northern portion of the county, continues to this day.

The Advertiser now reaches over 40,000 homes and businesses each week, while the Community News has a circulation of close to 14,000. 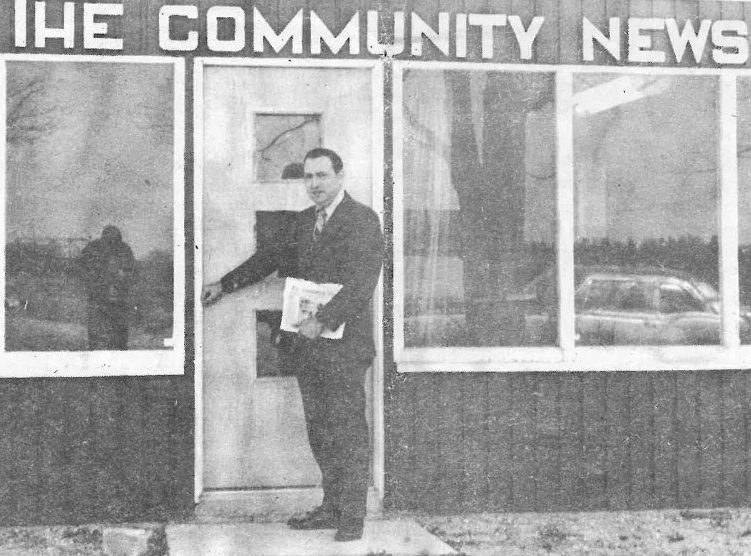 “[They adhere] to traditional values of integrity in journalism, uniting us and bringing us together,” said  Arnott.

And while Bill and Trudy can be credited with much of the business’ early success, Bill always made time to welcome and express his appreciation for staff members as the business grew and others started to make significant contributions.

Chong called the Advertiser “the single biggest news source in Wellington County and one of the largest family-owned independent weekly newspapers in Canada.

“Through his hard work and dedication, Bill created a voice for our community and rural Ontario,” Chong added.

“The paper remains a success to this day. I have no doubt that his son Dave at the Advertiser and his daughter Marie at CTV News Atlantic will carry on Bill’s journalistic legacy in the years ahead.”

White agreed, noting the Advertiser has provided a vital service to county residents over the years.

“Without the Advertiser, we don’t really have a way to communicate,” he explained.

“Councillors and the local politicians, I think they do appreciate what he’s left behind because there are many communities that no longer have a local newspaper.”

Bill’s commitment to his community went beyond his political and journalistic contributions.

Always thankful for what he had and where he lived, he was a proud member of the Drayton Legion, Fergus Elora Rotary Club, Guelph’s Men Club and Trinity United Church in Guelph.

In 2012 he was one of the recipients of the Queen Elizabeth II Diamond Jubilee Medal in honour of his significant community contributions and achievements.

In 2018 he received a Gold Quill award from the Ontario Community Newspapers Association in recognition of his 50 years in the newspaper business. 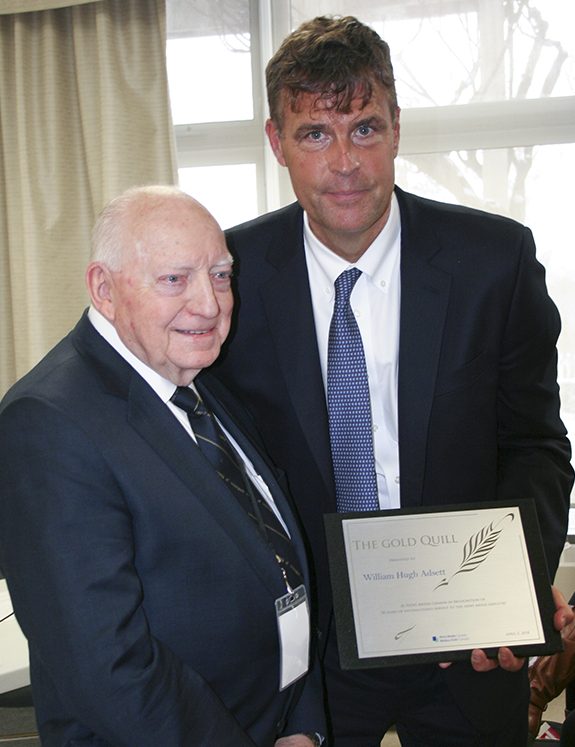 In recent years Bill enjoyed hearing speakers in Guelph and sharing lunch with his Rotary friends at Heritage River in Elora.

“Despite his own challenges he continued to impress upon others the value and necessity of trying to learn something new every day,” said son Dave.

White said even in recent years, Bill continued a lifelong effort to engage with the community, making appearances at events where he was very popular.

“Everybody knew Bill and that’s the old fashioned rural Ontario community where it really is everybody knows everybody,” he explained.

Although Bill lived a long and fulfilling life, it wasn’t without its challenges, including personal health issues and a prostate cancer scare in the early 1990s.

“Much of our father’s life was lived in the public eye, but his private life was a source of inspiration as we witnessed his greatest strength in what most would see as weakness,” said Marie.

In recent years, Bill’s battle with dementia was particularly difficult for everyone.

Marie said it was hard to witness Bill, a “prolific public speaker, struggling to find words that now escaped him.” She added it was “a blessing” to the family that Bill “never lost his memory of those he loved and cherished.” 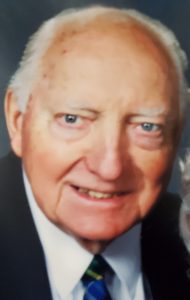 Dave said battling dementia was “extremely frustrating” for Bill, “considering his ability as a younger man to recite the family tree of many long-standing families in Wellington County or to give a compelling speech without notes.”

But through it all, “he never lost interest in meeting people,” Dave added.

The family has expressed gratitude for the nurses and support workers at Caressant Care Arthur, where Bill spent his final months.

“He took that journey with dignity and much like his life, he treated those around him with great stories and jokes of times past,” said Dave.

“The family greatly appreciated the kindness and care granted him during the past few months and treasured the opportunities to see him as pandemic protocols would allow.”

‘Legacy stands on its own’

In 2011, succession plans were finalized and Dave took over as the Advertiser’s owner. The move also marked Bill’s official retirement, though he continued delivering papers until 2015 and visited the Fergus office for years thereafter.

In his retirement, Bill took great pride and enjoyment in perusing the publication he started 53 years ago, finally able to relax and silently enjoy it as a faithful reader.

“I’m pleased with it beyond description,” he said with a smile in a 2018 interview.

While Bill wore many hats – including storyteller, friend, historian, politician, volunteer, farmer and family man – for thousands of regular readers, most who did not know him, the newspaper will stand as one of his greatest legacies.

“The Wellington Advertiser, I think, has been the glue that keeps the community together,” said White.

“Without the paper it would really be much less of a community. If all Bill did was just this paper, that’s more than a lot of other folks have ever done, and I think that legacy stands on its own.”

Bill will be interred at Rea Cemetery in Mimosa alongside his parents in a private family ceremony.

A celebration of life will be held next spring at the family farm.

– With files from Joanne Shuttleworth and Paige Peacock