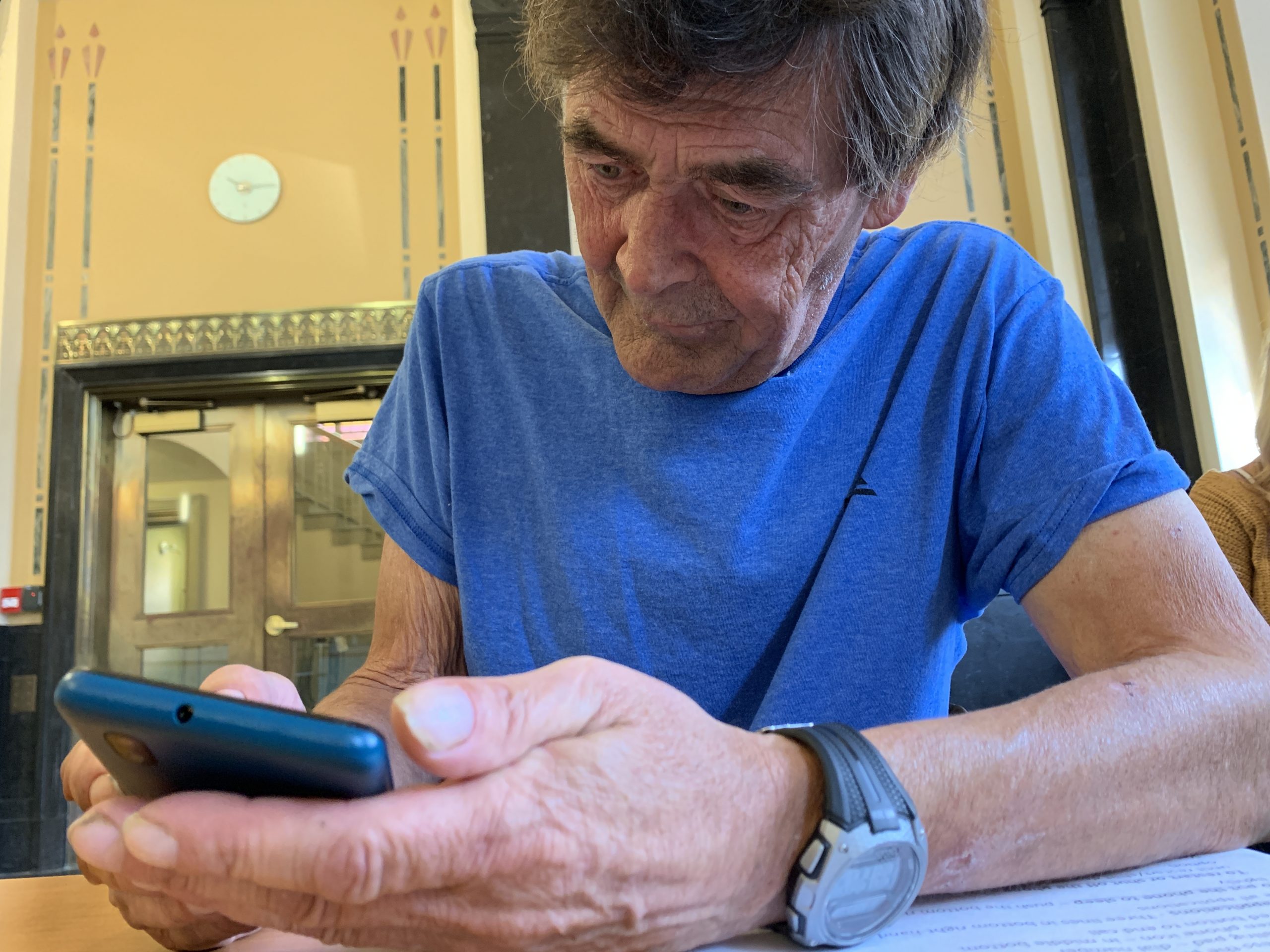 Vince Connolly, an Ontario Works recipient who lives in a homeless shelter, explores his new Alcatel 1B smartphone, provided by the county as part of its "get connected" initiative to close the digital divide and encourage digital equity. (Photo by Jordan Snobelen)

GUELPH – As Vince Connolly taps the screen of his new smartphone, a robotic, female-sounding voice announces his screen selections.

Lowering an ear to the phone, he can’t quite make out what the synthesized voice, part of the phone’s accessibility features, is telling him.

Laurie Godreau, Connolly’s caseworker, demonstrates how to adjust the volume buttons of the Android-based Alcatel 1B smartphone.

“That’s better, we got it,” Godreau says to Connolly, who has a large smile across his face.

Connolly is a 61-year-old Ontario Works recipient living in a homeless shelter, just one of the 200 Ontario Works and new immigrant clients who have received a phone connected with a two-year talk-and-text plan, all free-of-charge from the county, which is the social services administrator for both Guelph and the county.

The phone and plan provided, at a total cost of around $300 over two years, are part of the county’s effort to bring about digital equity for those who need it most – often people struggling with homelessness and also at times, substance-abuse problems.

The cost-free setup means there’s one less expense siphoning off Connolly’s precious $343 monthly income in a country claiming some of the most expensive cellphone service plans in the world.

In 2021, the average talk and text plan in Canada was valued at $26.70 compared to $6.78 (Canadian dollars) in France, but below nearly $50 in the U.S., according to an annual telecommunications services price comparison report.

By today’s standards, the Alcatel phone is basic, yet functional enough to handle everything Connolly needs.

Connolly says he’s like a “caveman being handed a Ferrari”– and is now only a few taps away from accessing the three people whose phone numbers are programmed: a friend, a doctor, and his caseworker.

Wellington Ontario Works director Stuart Beumer says paying a phone or internet bill isn’t exactly high up on the list of priorities for those trying to cover living expenses and food on minimal income.

The most a single person can receive from Ontario Works is $733 per month, including basic needs and shelter expenses. That increases by a few hundred more if there are dependants.

At a time when participation in society depends on a reliable phone and internet connection, those without connectivity are being left behind.

The rapid online move of services during the pandemic has only exacerbated barriers to accessing digital-driven social, educational, financial and medical services, highlighting the importance of social service providers stepping up to address digital inequity.

“I think without these kinds of supports, these families, these individuals, will further struggle to access the services they need and for us to be able to work with them,” Beumer said.

He referenced a recent Rogers service outage that left a quarter of Canadians without the ability to call 911 as an example of what it’s like to be disconnected in 2022.

“Imagine that’s everyday of your life,” Beumer remarked. “I think we need to increasingly think about digital access as a public utility.”

Many of the county’s clients, Beumer said, were without mobile phones – “especially those often with more complex health needs or maybe homelessness, or had housing challenges” – making it difficult for case workers and clients to communicate.

The county’s answer to improve digital equity within its base is the “get connected” initiative. And it’s not only mobile connectivity the county is focusing on.

In addition to the phones, the county has also purchased and made available 50 Chromebook (Google-based) laptops, and 35 internet hotspots—all available to clients for one-month loans.

To date, hundreds of loans have been made between all devices.

“We’re hearing from clients that it’s really helped them be able to access service, stay connected to family, stay connected to their supports they are needing and helping them kind of navigate toward finding housing or employment,” Beumer said.

To provide evidence of that sentiment, county staff are now working through an evaluation of how clients have been impacted, using surveys provided by caseworkers and settlement workers to clients.

The survey period closes at the end of the month and Beumer hopes to turn results around in a November report to the country’s social services committee.

As for Connolly, his new cell phone replaces the bygone payphones he once relied upon and provides him a sense of security knowing help and resources are only a few voice-guided taps away.