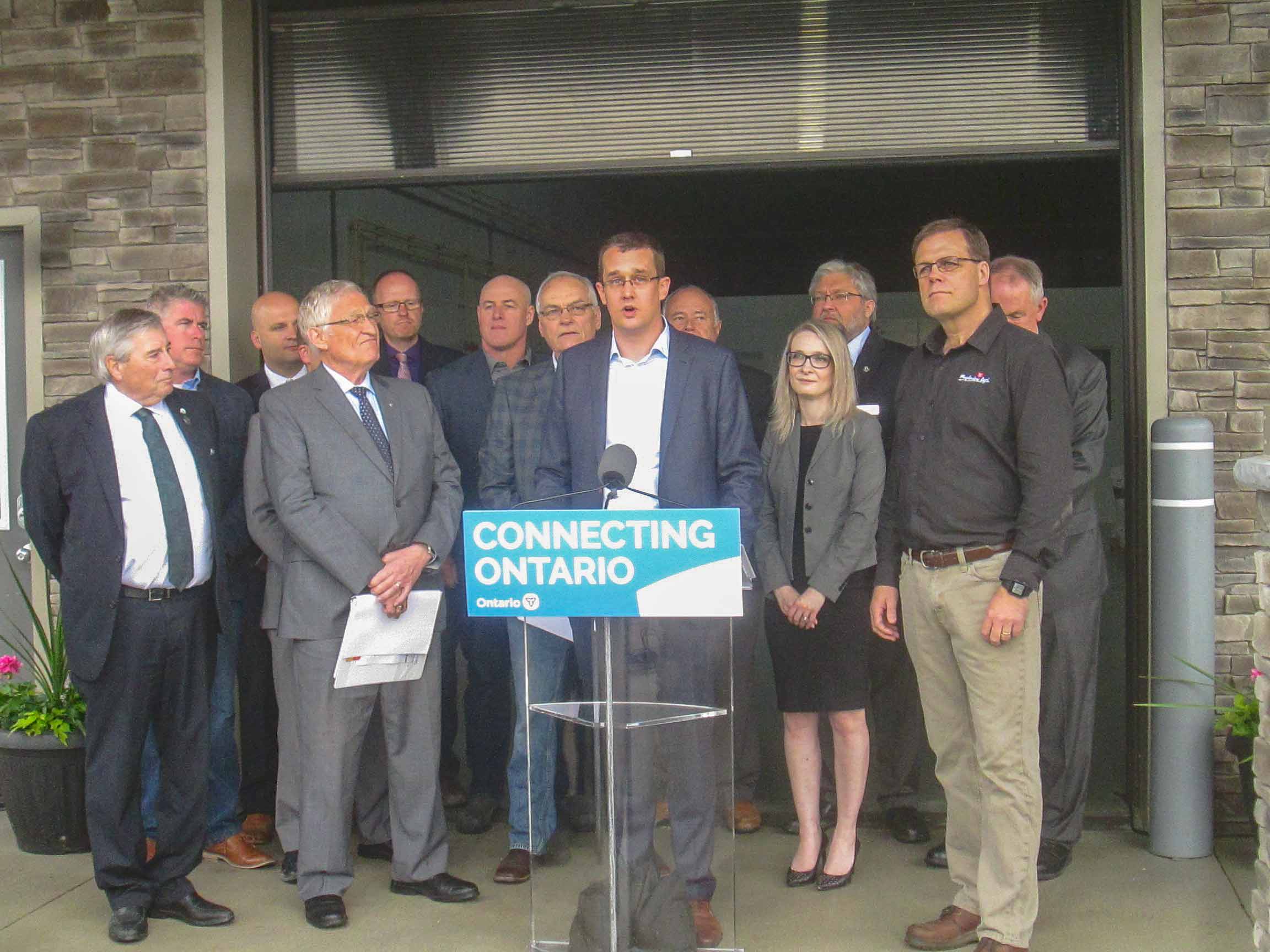 Major announcement - Infrastructure Minister Monte McNaughton announced on May 23 that better broadband service is coming to Wellington County. He was joined, front row from left, by Town of Minto Mayor George Bridge, Agriculture, Food and Rural Affairs Minister Ernie Hardeman, Perth-Wellington MPP Randy Pettapiece, Kitchener South-Hespeler MPP Amy Fee and Brian Keunen of Mapleview Agri Limited, the Mapleton farm where the announcement was made. McNaughton announced the Ontario government has committed up to $63.7 million to Southwestern Integrated Fibre Technology (SWIFT). Bridge, who acted as emcee, is a member of the SWIFT board, as are those in the back row from Dufferin, Simcoe, Wellington and Perth Counties and the Ontario Federation of Agriculture. SWIFT is a not-for-profit corporation initiated by local municipalities to address connectivity in the region, chaired by David Mayberry. MP John Nater was also in attendance. Photo by Lynne Turner

MAPLETON – Wellington County will be among the first rural communities to benefit from the expansion of broadband internet.

Infrastructure Minister Monte McNaughton was at Mapleview Agri Limited in Mapleton on May 23 to announce the provincial government has committed up to $63.7 million to Southwestern Integrated Fibre Technology (SWIFT), a not-for-profit corporation initiated by local municipalities to address connectivity in the region.

SWIFT projects, including the one in Wellington County, will be delivered with support from municipal, provincial and federal levels of government as well as third-party partnerships.

“Some of the money will be coming from the actual providers that are going to be building the project,” explained Minto Mayor George Bridge in a May 27 telephone interview.

The province originally announced in 2014, under the previous government, plans to contribute $90 million to the SWIFT project.

Bridge said the earlier figure was higher than the one announced last week “because at one time we had to build what we call a backbone. But since we’ve done all the research, we’ve found the backbone is already existing.”

A press release from SWIFT indicates the funding includes $12.1 million for a targeted project focused on under-served homes and businesses in Wellington County.