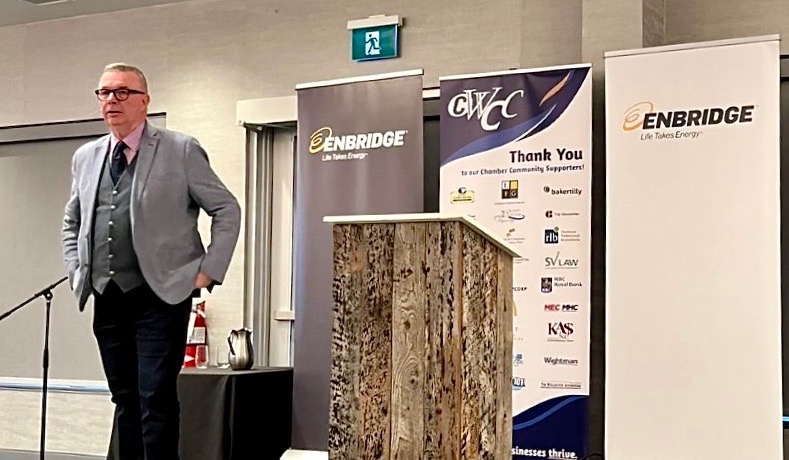 Centre Wellington Mayor Shawn Watters spoke about growth and the challenges it will bring at the Centre Wellington Chamber of Commerce Mayor's Breakfast event on Jan. 18. Photo by GrandWay Events Centre

ELORA – Centre Wellington has some hard challenges ahead and Mayor Shawn Watters used his time at the Mayor’s Breakfast, hosted by the Centre Wellington Chamber of Commerce on Jan.18, to prepare his audience for what he sees on the road ahead.

His hour-plus speech felt more like a conversation than a speech as he spoke without notes and welcomed questions as they came up – even questions that led down a tangent.

Although he is new to being mayor and admitted there’s lots to learn, he is not new to local politics.

Watters extended an invitation to keep lines of communication open with residents, the business community and other levels of government.

“We need your collective energy to navigate these difficult times,” he told his audience of 125 local businesspeople at the GrandWay events centre in Elora, along with 10 participants who watched via Zoom.

“Reach out. We have big ears.”

The biggest challenge for Centre Wellington, and one that will impact almost every aspect of municipal government, is growth.

“It will have a substantive impact on our community,” Watters said.

The province wants to build 1.5 million homes in the next 10 years to accommodate anticipated growth in Ontario, and it has allocated some of that growth to Wellington County, which in turn has allocated growth to its member municipalities.

Centre Wellington is to double in population to 60,000 people in the next 20 years according to those allocations, Watters said.

And it will be up to council to decide where and how those new residential units will be built within the constraints of the newly passed Bill 23 and Bill 109, both of which deal with housing and planning.

The options are to grow out, grow up or intensify. Watters said it will probably take all three, along with out-of-the-box thinking, to reach those targets and still have a liveable, well-planned community. 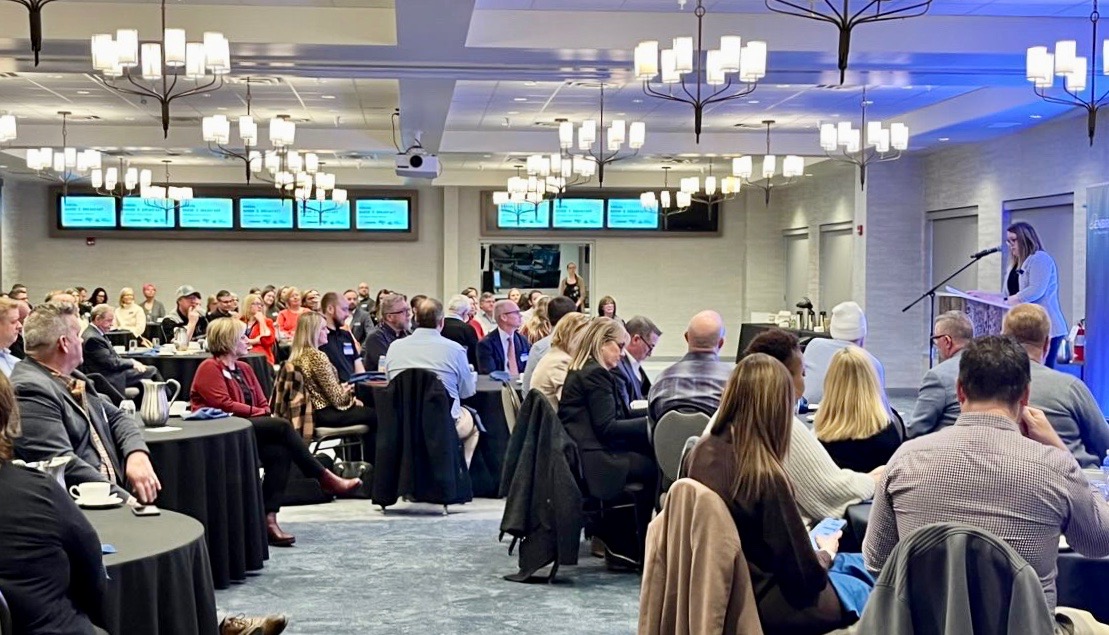 About 125 people gathered to listen to Centre Wellington Mayor Shawn Watters at the Chamber of Commerce Mayor’s Breakfast on Jan. 18. Photo by GrandWay Events Centre

Intensification – building on brownfield sites and adding height to buildings – “will challenge our downtowns,” he said.

“We want to preserve farmland as best we can,” he added, though he acknowledged the township will likely need to expand its urban boundaries.

He said the township will have to consider allowing multiple dwellings on large lots and he sees potential in the bylaw passed by the previous council that allows residential units in highway/commercial zones.

“There’s not one answer to the problem,” he said. “But we’ll figure it out and that’s exciting.”

To his business audience, Watters said he understands some businesses are unable to fill vacancies because potential employees can’t find a place or afford a place to live in Centre Wellington.

“It’s not just single-family homes we need,” he continued. “This is important for the labour pool” to have a variety of housing styles and price points available in the community.

“This is our number one challenge.”

On a question about Airbnbs taking space that could otherwise accommodate long-term rentals, Watters said the township needs to balance accommodating tourism with the need for rental housing.

He said a staff report on the issue is expected later this year, which will open the door for more discussion around the horseshoe.

“It was so conversational and so engaging. I was at the edge of my seat and I feel excited about the future of our community.”

“It’s early in this council’s term of course, and a lot of what was discussed was the list of significant things they are tasked with this term,” she stated in an email.

“What was clear,” she continued, “was that there will continue to be dialogue and conversations about these big topics – things like housing, parking, infrastructure, managing the growth of the community – these things don’t necessarily get solved quickly or at a Mayor’s Breakfast.

“But what does happen is a conversation begins, ideas are shared, interest is piqued, and then it’s our job, in partnership with the township, to keep the lines of communication open between the business community and council.”