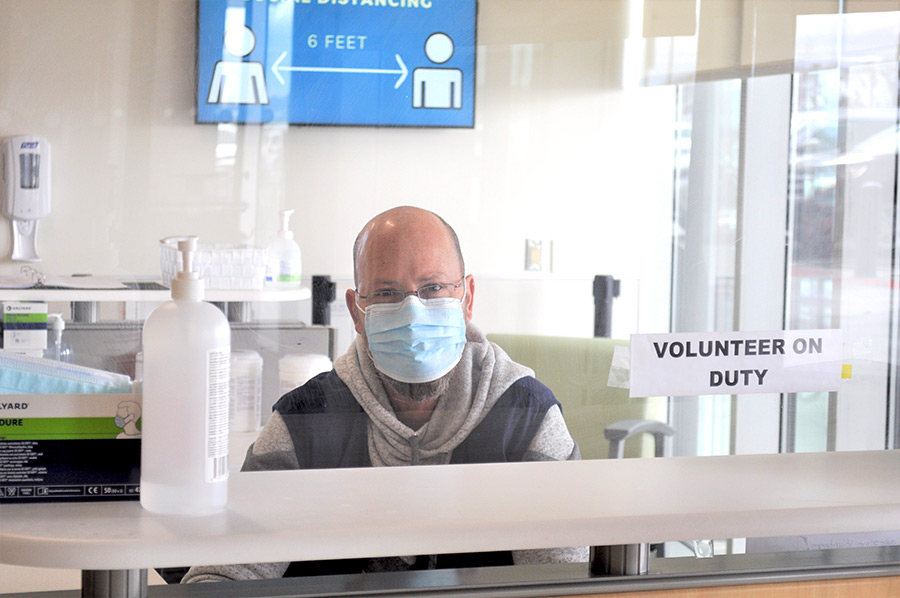 On duty – While volunteer programs at the three hospitals in Wellington County have been largely closed to volunteers during the pandemic, Groves hospital has allowed some to come back. Here, Brad Park greets patients as they arrive at Groves and reminds them of COVID restrictions. Submitted photo

WELLINGTON COUNTY – Volunteer week would normally be a big deal at Louise Marshall Hospital, where the 30 to 50 citizens who give hours of their time to the hospital and its patients, are properly celebrated and appreciated.

For Evelyn Collins, acting president of Louise Marshall’s auxiliary, it’s been a most frustrating year as volunteer activities have been largely cancelled due to the pandemic.

But to be fair, much of what the auxiliary does would have been cancelled anyway because of the reconstruction/redevelopment project underway at the hospital.

The auxiliary runs the gift shop at the hospital, which generates about $10,000 a year to the hospital’s foundation.

Volunteers also greet patients and distribute paperwork in diagnostic imaging, ambulatory care and the foot clinic. There are also volunteers in the physiotherapy department, but they are independent and not part of the auxiliary.

Because the gift shop is in the construction zone it’s been closed since the fall of 2019. It is expected to reopen this fall in a new location with a slightly larger footprint and a storage area that will be very handy, Collins said.

She was allowed a tour a few weeks ago, “and it’s coming along,” she said.

But with the pandemic, only essential visitors are allowed in the hospital and right now, it’s just not safe to have volunteers inside.

“We wish we could be there helping,” Collins said.

A perk for the volunteers is that they are eligible to be vaccinated along with other hospital staff.

“So there are 26 people who can get their shot regardless of their age,” she said. “No one will be able to volunteer unless they are vaccinated.”

Collins said it’s rewarding for volunteers to help patients, put them at ease, make sure their paperwork is filled out properly and gets in the right hands.

“It’s frustrating that we can’t do anything right now,” she said. “All we can do it wait.”

When the hospital reopens to volunteers, Collins said the auxiliary will run a membership campaign for new volunteers.

“Many of our volunteers are over 80 now and are finding it difficult to come out. We’re also hoping that with expanded ambulatory care, they’ll need more of us,” she said.

Something the team is working on for 2022 is the 100th anniversary of the hospital auxiliary. They hope to publish a book of recipes and history and celebrate the organization that has added so much to patient comfort and hospital operations.

“We’re hoping and praying we will be able to do it up right,” she said.

It’s been a similar scenario at Palmerston and District Hospital, with volunteers hamstrung by the pandemic.

Helen McFadzen, president of the auxiliary, said the group managed to sell urns of greenery before Christmas and raised $4,000 for the hospital’s foundation.

“It went well so we’ll do that again,” she said, noting the group had to cancel the bazarre it usually holds in November.

But everything else has been on hold since last March, she said.

Normally there are about 70 volunteers at the Palmerston hospital, and they assist patients who arrive for appointments and surgery as they navigate the hospital.

The auxiliary also runs the gift shop with proceeds going to the foundation.

McFadzen has been president for four years and a member since 1990.

“I volunteer for a bunch of other things too,” she said. “I just want to do my part.”

The Groves Hospital Volunteer Association (GHVA) has about 250 volunteers who have been actively assisting Groves Memorial Community Hospital since 1933.

Volunteers run the gift shop in the hospital and the New to You shop at the north end of Fergus. Those with special training can directly help patients with walking and exercise, meals and therapeutic recreation.

Of course, volunteer programs at Groves have also been put on hold during the pandemic, although since the fall, a few have been allowed back to staff the entrance and help with way-finding in the new hospital.

Howard Dobson is president of GHVA and a past-chair of the hospital’s board of directors.

He said the Groves volunteer association is a mighty force that spreads compassion among patients and helps pay for medical equipment, which is a huge benefit to the community.

“Our association is the envy of many hospitals in larger urban communities because we’re so effective at fundraising,” he said.

The GHVA has pledged to donate $1 million to the hospital’s capital campaign. And even though the New to You second-hand store was closed for part of the year and had limited hours since it re-opened, “we’re still committed to meeting that pledge,” Dobson said.

So, why volunteer? Why open yourself up to more stress and deadlines?