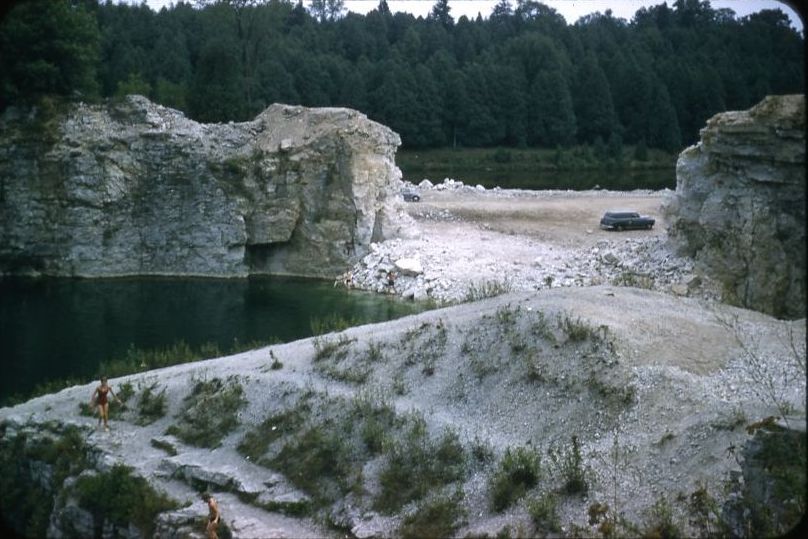 The old swimming hole - In 1956 the rock on the river side of the quarry was removed to help build the Conestogo dam. This photo was taken shortly after the removal of the rubble. It was already a popular spot with local swimmers, though seldom as crowded as it became in later years.
Wellington County Museum & Archives ph 32303

For over half a century the Elora quarry has been a local landmark and the area’s most popular swimming spot.

Scattered around the quarry are a few remnants of the structures that once served a thriving industry on this location. [This column was written in 1991; all the structures on the site have since then been removed].

The commercial production of lime took place here for only 18 years and the closure of the quarry ended the role of limestone as a local economic resource.

The limestone bedrock that lies beneath the village of Elora became a favourite local building material after 1850. Limestone was also used for the production of lime for the mortar used in construction of stone and brick buildings.

Limestone in Elora is abundant and close to the surface, particularly near the rivers. It was convenient and cheap for Elora’s 19th century masons and contractors to produce their own lime.

The process involves the heating of the limestone, composed largely of calcium and magnesium carbonate, to produce oxides of these minerals, popularly known as quick-lime. The product is then mixed with water to form hydrated or slaked lime. This is the basic ingredient of mortar and plaster. Commercial producers use different equipment and larger kilns, but the basic chemical process is the same. Curiously, it was not until the 20th century that an effort was made to exploit Elora’s most plentiful commodity.

A number of small quarries have existed in Elora over the years. The most important of these was located just to the north of the David Street bridge. Carter Brothers, the produce dealers, tried to establish a commercial lime operation here about 1900. (The concrete foundations of their buildings still exist on the site.)

Another small quarry-and-lime kiln was established sometime after 1900 at the location of the Elora quarry. Unfortunately, almost nothing is known about this business. In 1914, the property came into the hands of James Russell, the Fergus merchant, and John Connon, Elora’s photographer and historian.

This venture proved to be one of Connon’s few successful business deals; he and Russell sold the business a year later for $3,000 – double their purchase price. The buyer was Thomas Kennedy, the representative of a syndicate that was organizing the Elora White Lime Co. to produce lime on a commercial scale.

The firm constructed two large kilns over the summer of 1914, and soon the business was in production. Encouraged by his immediate success, Kennedy added two more kilns the following year. The biggest problem for the company was securing sufficient labour during the wartime manpower shortages.

Unlike Elora’s other industries, the White Lime Co. had the advantage of a railway siding. It was serviced by a railway line constructed a decade earlier from the Canadian Pacific line to serve the mill at Aboyne. (The embankment for the siding can still be seen at the western edge of the Drimmie Lumber property. [Today, Quarry Commons is in this location.])

In 1916, the business was sold to the Alabastine Co., of Paris, which was assembling a number of lime producers into a conglomerate. The new owners added equipment, including an electric stone crusher and an automatic bagging machine. Coal replaced wood as the fuel for the kilns. Most lime was shipped in 40-pound bags to builders and contractors across the province. Several steel mills and paper producers purchased quicklime, and agricultural lime was available at the plant for farmers.

By 1917, the plant had a capacity of 40 tons per day, and the outlines of the present quarry were beginning to take shape. The pit was already 250 by 100 feet, and 12 feet deep. A tramway was installed to hoist small cars of limestone from the floor of the pit to a hopper over the crusher.

Pay rates at the quarry and lime plant were comparatively high at the end of the war – about 35 cents per hour, which was double the general labour rates at the Bissell and Mundell plants. However, the work was dirty, strenuous, and dangerous. At least one man was killed at the plant, and others suffered from broken and mangled limbs, and burns from the caustic quicklime. The turnover of workers was high.

A fire destroyed the main building at the plant in 1920, but did little damage to the kilns and equipment. Rebuilding was done on a larger scale. (The floor and foundations of the new building still exist, between Mill Street and the parking lot at the quarry.)

The building boom in Toronto in 1918 and 1919 provided the best years for the business, which provided dozens of carloads of lime for plaster and mortar. Production declined somewhat in the early 1920s, and then picked up again. By 1928, six kilns were in operation, and a large storage tank was constructed to hold a reserve stock of lime.

The quarry had acquired its current proportions by 1928. The walls were now over 100 feet high. The floor of the quarry was far below the level of the river and water table, and electric pumps were used to keep the floor relatively dry.

The various operations at the quarry and plant consumed large quantities of electricity, and the Alabastine Co. lobbied for several years to have the quarry annexed to Elora. The firm wanted to purchase its power from the village, which could provide a better rate than Ontario Hydro. The village annexed the quarry property, some 16 acres, in 1926.

A reorganization of the Alabastine Co. took place in 1927. Five more small producers were taken over, all under the name Canada Gypsum and Alabastine Co., later the Gypsum, Lime and Alabastine Co. The Elora plant ceased production during the depression in 1932. Demand at this time was low, and in the construction industry, it was practically non-existent. Even a robust economy, though could not have saved the Elora operation. It was small in scale compared to other plants operated by the company, and was an obvious candidate for closure as the firm rationalized its production facilities. As well, the water problem had become a hindrance to the efficient working of the quarry.

The plant and machinery remained in place for several years. The Alabastine Co. may have viewed the Elora plant as a reserve in case demand suddenly increased, but this never occurred. The quarry filled with water as soon as the pumps were turned off in 1932, and it soon became a favourite local spot for swimmers. In 1935, the Gypsum, Lime and Alabastine Co. gave permission to the village to construct dressing rooms for the use of swimmers.

In 1938, the Village of Elora rented some of the land to the east of the quarry for use as a dump. The rent was $50 per year, and there was no costly site-selection committee, as there is today.

The quarry was altered in a major way in 1956, when the rock adjacent to the river was blasted out and trucked to Peel Township for the facing on the Conestogo dam. The resulting beach area has been popular with swimmers and sunbathers since that time.

The changes and improvements made by the Grand River Conservation Authority when it acquired the quarry property were not popular with local residents.

Many resent the fence, the ban on diving, and the admission charge. On the other hand, the quarry’s status as a recreation area is assured for the future. It also remains as the largest single artifact of Elora’s industrial age.

*This column was originally published in the Elora Sentinel on June 25, 1991.