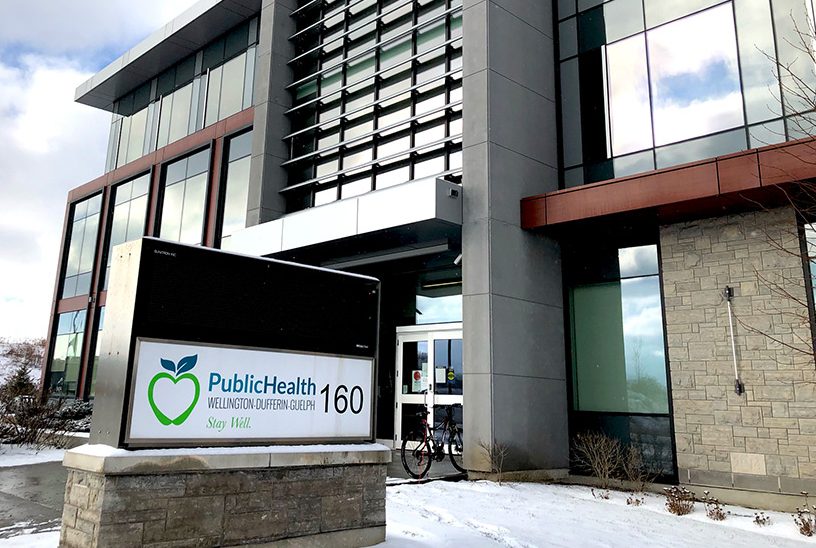 GUELPH – When the local health unit starts receiving doses of AstraZeneca the COVID-19 vaccines will likely be administered at pharmacies to those aged 64 and under.

The province is to receive about 190,000 doses of the newly-approved vaccine this month, but Medical Officer of Health Dr. Nicola Mercer couldn’t say when Wellington-Dufferin-Guelph Public Health (WDGPH) will start distributing it.

Getting the AstraZeneca vaccine will enable the health unit to take the vaccination plan in a new direction and include a new set of eligible people.

And plans are in the works.

“Pfizer and Moderna have stringent delivery requirements and are not conducive to pharmacies,” Mercer told the board of health at its March 3 meeting.

“AstraZeneca is fridge-stable and better for pharmacies,” and eventually could be administered in doctors’ offices and mobile clinics, she said.

So far WDGPH has only received Pfizer and Moderna vaccines.

Moderna has been given at clinics in long-term care and retirement homes and Pfizer at the Guelph public health office and at vaccination centres in Fergus and Orangeville.

There was also a one-day pop-up clinic in Mount Forest last week.

Most residents of long-term care and retirement homes have accepted the shot, she said, “but a fair number of staff declined – 30 to 50 per cent,” which is a pattern seen across the province.

More than 1,000 essential caregivers have been immunized and uptake among hospital workers at Guelph General and Headwaters hospitals has been high and is “substantially complete.”

“It didn’t work as well at North Wellington hospitals,” Mercer said, adding there are 500 spots available to these healthcare workers this weekend if they book appointments.

“We’re really hoping to make inroads. We’re trying to understand why they are not accessing appointments.”

Community healthcare workers have recently been added to the priority list, “and all have been offered appointments and are asked to book, and they are doing so,” she said.

Mercer said she was “concerned” about the over-80 population – particularly about how to reach them and whether they’d have trouble with the online registration.

But they are responding to the invitation to be vaccinated, she said, noting, “We had 1,600 register today.”

The rest of the priority group has been difficult to reach, she said.

Those receiving chronic home care, for example, often have mobility challenges and can’t get to clinics, and the current vaccines can’t really come to them.

And the local Indigenous community often has internet issues.

“We’re working with the Community Health Centre to ensure they have access to booking,” Mercer said.

These high priority groups will always be eligible for the shot, even if they don’t get it now and even when the program moves to the next priority group.

She said there are about 250,000 people in the region who will eventually be vaccinated, each to receive two doses.

Erin Mayor Allan Alls, who sits on the WDGPH board, asked when mobile clinics will be coming to Erin.

“We do need to get a plan to the people of Erin,” he said.

Mercer said currently the clinics are only in big centres because of the transport and storage requirements of the vaccine and for now, that’s where people will have to go.

“But mobile clinics will be considered in the future,” said Rita Isley, WDGPH director of community health and chief nursing officer.

WDGPH was among the first health units to develop its own online booking system and when the Ontario registration system is up and running on March 15, WDGPH will continue to book appointments here.

WDGPH recently installed a new electronic Amazon call centre, which comes online March 4, after its former phone system crashed due to the high volume of calls.

The call centre received 15,000 calls at the same time on a single day from people wanting to book appointments, prompting the crash.

“We still can’t manage 15,000 calls a day,” Mercer said, which is why public health is encouraging online registration and booking.

But the new system should mean shorter waits and a more reliable system for those who do need to phone, she said.

Why is region in the red zone?

Mercer told the board of health the data that determines the provincial COVID-19 alert level for the region are the cases per 100,000 population (seven-day moving rate) and the test positivity rate (seven-day moving average).

The other information matters but is not as heavily weighted.

“Do I control it? No,” Mercer said of Ontario’s COVID-19 framework.

“It is determined by the province and approved by cabinet. But the way we are trending this week bodes poorly. We will likely remain in red.”

The board also heard from Chris White, mayor of Guelph-Eramosa and chair of the finance committee.

The fourth quarter report for 2020 shows a surplus of $54,000, which he called “quite an achievement” in a year of uncertainties and unknowns.

“It’s a year that no one’s going to forget,” White said.

Board chair and Minto Mayor George Bridge said, “I’d like to thank the federal and provincial governments for coming through.

“Both levels of government provided funds to keep health units from running deficits.

“I don’t think people realize that public health is mostly funded by the municipalities, so that would have come back on us.”