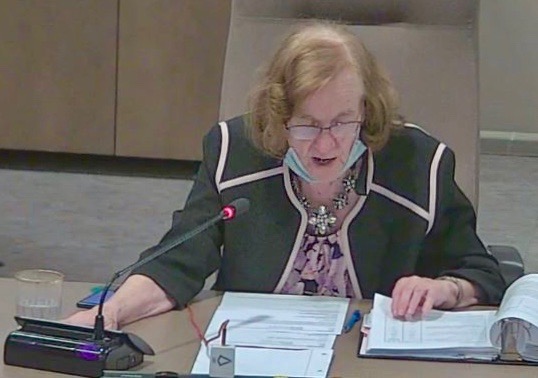 GUELPH – Upper Grand District School Board (UGDSB) board officials say they are preparing to deal with new COVID-19 strains and the potential third wave that may come with them.

As the B.1.1.7 variant, a COVID-19 variant originally found in the UK, grows more prevalent in Canada, UGDSB trustees said at the Feb. 23 they do not believe the current precautions will be enough to effectively protect from the new and more transmissible strain.

Trustee Mike Foley asked the board what the plan is to get ahead of the of the new strain, knowing it is 50 per cent more transmittable than the original variant, and he expressed concern over the current mask policy.

“I’ve talked to some health professionals – epidemiologists, nurses and doctors – and they’re saying that just a cloth mask is not going to cut it,” said Foley adding those he talked to all suggested moving to ensure students wear masks with at least three layers.

He pointed out that some of these classrooms have over 28 students, plus three teachers.

Foley suggested breaking down the classes and offering a hybrid junior and senior kindergarten option to reduce class sizes.

According to Martha Rogers, UGDSB director of education, the ministry of education will not allow school boards to make changes to elementary school programs to allow for this type of hybrid class.

The board has had plans in effect since last June to make this kind of change, if required, said Rogers, adding the board is ready to make the switch as soon as the ministry will allow it.

“My preference would be to do that right now,” said trustee Mark Bailey.

Bailey noted he is eager to be proactive in protecting students from new strains of the virus – and the ministry should be showing leadership to make sure this happens.

“My fear is that we have sort of grown used to the fact that we are safe with our current protocols,” he said.

“I know kids will be kids. Teenagers will be teenagers. I just fear that we have been lulled perhaps into a false sense of security due to the original strain, and that the UK strain, or whatever variant, will emerge in our communities.”

Bailey added, “I just hope that our board is prepared to pivot quickly.”

The board unanimously approved a new motion stating the UGDSB will write to the ministry of education to request the government’s plan for dealing with class sizes, PPE and what happens if the new variants become more prevalent in Ontario.