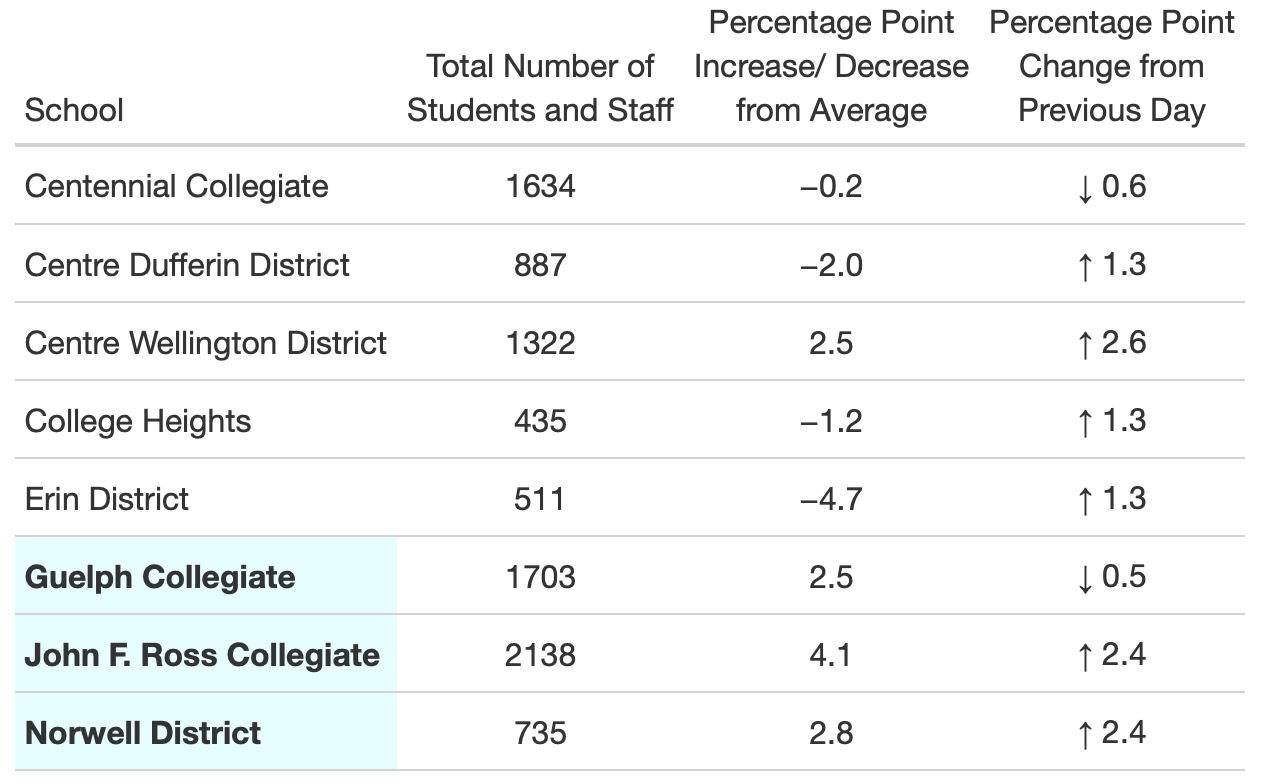 GUELPH – In the absence of case reporting in schools, the Upper Grand District School Board (UGDSB) has launched its absence tracking pilot program – a program aimed at monitoring the daily rates of absenteeism in schools across the board.

The program was launched on Jan. 18 as students resumed in-person learning after a two-week delay following the holiday break.

“Ontario’s Chief Medical Officer of Health has said that COVID-19 is to be considered widely present in our communities at this time and therefore it is reasonable to suspect that someone in our school may have COVID-19,” read a Jan. 18 statement on the board’s website.

The statement noted the board will not have confirmation of positive COVID-19 cases, as only public health can confirm positive cases.

“As an additional measure and layer of communication to keep our communities informed, the UGDSB has launched a pilot initiative to track school absence rates on a daily basis,” the board website states.

As part of the program, the board will be posting data daily from Monday to Friday on the UGDSB website.

The pilot program, which the board notes may evolve as required, does not include students registered with either the elementary or secondary remote program.

“The UGDSB’s pilot program is meant to give a sense of the impact of COVID-19 on schools, as positive cases will no longer be reported,” the statement reads.

The program is based on the average absence rate, and shows:

The numbers include all students who are absent and have not reported a non-COVID reason for their absence to their school, and are adjusted for the average absence rate for that school based on data from September to December, 2021.

“This figure is used as a baseline to compare daily absences, so as to not overstate potential COVID-related absences,” the pilot program webpage reads.

Following direction from the province, UGDSB spokesperson Heather Loney stated in an email that when a school reaches 30% of the school’s average absenteeism rate, it will be highlighted on the dashboard on the board’s website.

The board will notify Wellington-Dufferin-Guelph Public Health “if a school has exceeded the 30% threshold of the school’s daily average absence rate,” Loney stated.

“If public health had any follow up steps at that point, the board would follow Public Health’s direction.”

The first day of the return to in-person learning for the UGDSB showed nine schools were already above the 30% threshold.

“It is important to note that the reason that some schools were already highlighted yesterday (Jan. 18) is due to the sensitivity of our approach,” Loney explained.

“Each school’s 30% threshold depends on the school’s average daily absences from the fall as opposed to the simpler calculation of 30% overall absences.

“For example, if a school has a total student/staff population of 300 they would meet their 30% overall absence at 90 daily absences.

Schools currently listed with a rate of absenteeism upwards of 30% above the baseline are as follows:

“Our model also adjusts for absences that are reported to be for reasons other than illness or isolation (e.g. a parent choosing to have their child learn through our temporary remote learning program),” Loney explained.

“The goal of our pilot is to show trends in absences due to illness/isolation in relation to the pattern of absences for that school in the fall.”

To view data from the pilot program visit ugdsb.ca.

The Wellington Catholic District School Board will be releasing a similar program to monitor absenteeism in schools, which will be made available publicly beginning next week.