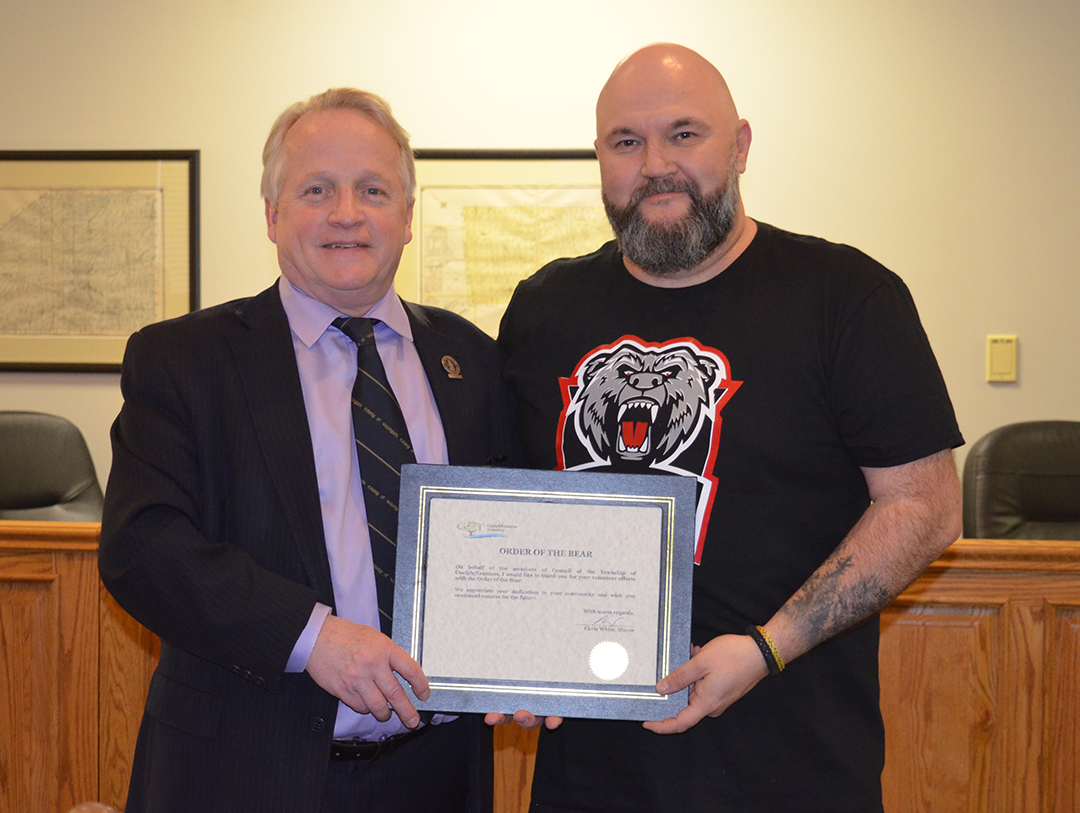 Saying thanks - Guelph-Eramosa Mayor Chris White (left) presents a certificate to Frank Marsh, who brought together a team of volunteers to form the Order of the Bear in Rockwood. Photo by Phil Gravelle

BRUCEDALE – Guelph-Eramosa Township council has thanked its many community volunteers and presented a prominent group with a certificate of recognition.

In connection with the upcoming Volunteer Week, Mayor Chris White made a presentation on April 1 to Frank Marsh, who organized the Order of the Bear program in Rockwood.

The group was recently provided a three-year lease for just $1 to run a drop-in centre with board and card games in the basement of the Rockmosa Community Centre, known as The Bear’s Den.

“The Order of the Bear has become a community hub for Rockwood,” said White.

“It’s a safe and positive space for our youth and opportunity for people of all ages to have fun and share their knowledge of games.

“I’d like to recognize all of the volunteers who contribute their time and efforts and to Frank Marsh, who saw a need in his community and worked alongside his neighbours to make the Order of the Bear happen.”

“We really appreciate it – thank-you for all your support,” said Marsh, who was joined by a dozen Order of the Bear members at the council chambers.

“You guys have been behind us since day one.

“I’d like to say thanks to all the wonderful people who have come here today.”

He said the group has about 40 regulars who come out to the centre, with activities on various days of the week.

“There are 86 members in our club, and a core group of 15 volunteers that run different game nights,” said Marsh.

White said that with the expansion of the park next to the community centre, the township wanted to appeal to a wider demographic, but there was no youth centre.

When the daycare centre moved from the basement, there was available capacity.

The township has limited staff, so when volunteers offered to run a program, it was a “brilliant idea, and it really has added a service in that area that we couldn’t match,” said White.

The Order of the Bear has an extensive schedule of featured games on weeknights and weekends (visit  orderofthebear.ca for details).

Participation is open to youths 10 and older, and adults. Games nights are free for members and $5 for non-members.

An annual membership is $20, plus $10 for additional family members. The group seeks donations and sponsors as well.

It received a $2,000 grant from Wellington County for equipment/supplies, including a 3-D printer that creates customized game pieces.