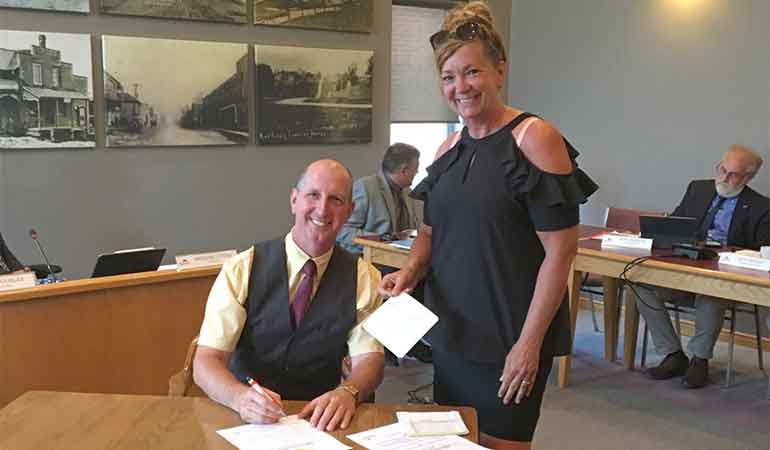 The initiative is a locally-delivered, nation-wide program initially established by charitable organization Parachute and sponsored by FedEx.

“Our program will be obviously focused here locally in our region, so really the point is to try to find community members to sign up as pace car drivers,” said Goertzen.

Supporters of the initiative sign a pledge to drive no faster than the posted speed limit.

“Basically by signing a pledge form, you are saying that you agree that you would be courteous and in essence you will be a driving speed bump,” added Woodham.

Pledge members are also  expected to be courteous and to give way if cars try to overtake them  in the interest of safety.

Those that take the pledge receive a sticker to display on their car identifying that they are part of the program.

However, Goertzen and Woodham added the committee will limit the number of Pace Car pledges.

“The goal is to have a limited number but a sufficient number of ambassadors so we don’t want everyone in the township to have one of these stickers on their cars because it just becomes white noise,” said Goertzen.

She and Woodham told council they hope pledgers will be “prominent” members of the community, including councillors, committee members, PTA members from local schools and, eventually, local business owners.

“Really the plan today is to gain support from community leaders and especially the Township of Mapleton with this program,” said Goertzen.

“We are seeking support from council in the form of endorsing this program as well as participating in the program by allowing the stickers to be put on passenger vehicles that are owned by the township,” she added.

Councillor Marlene Ottens asked if there are other municipalities in Wellington County that are already taking part in the initiative.

Mayor Gregg Davidson, who sits as a representative for the county on Safe Communities, told council Mapleton is the first municipality in Wellington to adopt the Pace Car program.

“We will be leading the way,” said Davidson.

She added there is a plan to create social media accounts for the committee, on which it will share content about the initiative.

Councillors Michael Martin and Dennis Craven congratulated the committee on bringing the program to Mapleton.

Council then passed a resolution to endorse the program.

Councillors will discuss with staff the possibility of displaying the stickers on township vehicles and make that decision at a later date.

After the resolution was passed, Davidson signed a pledge form.