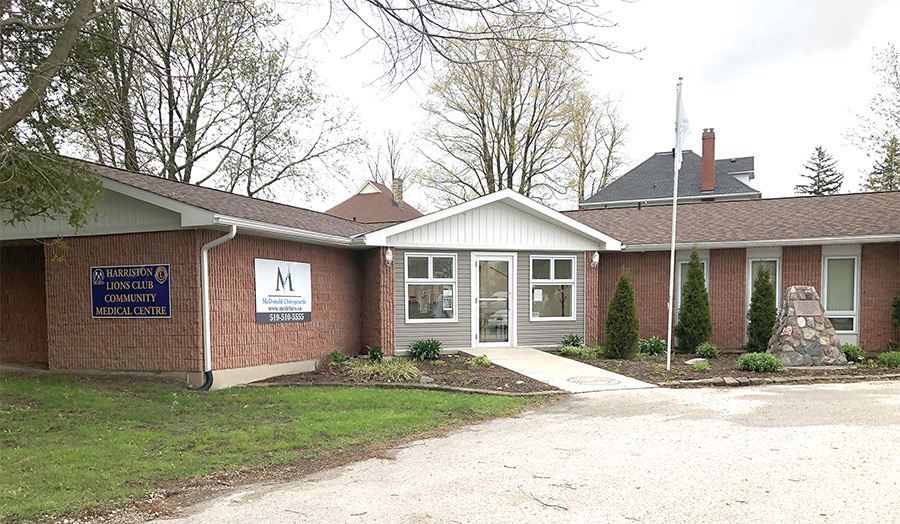 Expansion plans - The Town of Minto will provide backing to secure financing for a planned addition on the Harriston Lions Medical Centre. Officials say the addition is needed to facilitate physician recruitment to support growth in the community. Photo by Patrick Raftis

MINTO – Town council has agreed the municipality will back a mortgage to fund a building addition for the Harriston Lions Medical Centre, in order to facilitate local physician recruitment efforts.

However, council deferred a proposal to include $10,000 in financial support for medical centre operations in the town budget for 2022 and future years. Council will instead consider any requests for such funding as they are brought forward.

Originally established through the Harriston Lions Community Medical Centre Corporation in 1978, the clinic has been operated by the Minto Municipal Services Corporation (MMSC) since 2015. The town owns the facility through shares in the corporation and several councillors sit on its board of directors.

Minto CAO Derrick Thomson told council at the May 4 meeting that several months ago the Minto Mapleton Health Care Recruitment Committee indicated “they need to specifically recruit doctors for Harriston.”

“With the current demand exceeding capacity, and the planned new growth that will be coming to Harriston, it has been acknowledged by the physicians and (Minto Mapleton Family Health Team) that we need to recruit a physician. It is also recognized that it is difficult to recruit physicians (who are in high demand and have many options) without dedicated medical space,” explains a staff report from treasurer Gordon Duff and business and economic development manager Belinda Wick-Graham.

A committee consisting of Thomson, Duff, Wick-Graham and chief building official Terry Kuipers began looking at a variety of options including downtown locations and other Town of Minto-owned facilities.

“After a thorough review it was agreed that the Lions Medical Centre would be the ideal location as it has adequate parking, can be made easily accessible and compliments the other tenants in the building,” the report explains.

A concept for an addition of approximately 1,150 square feet was designed to include enough space for two practitioners.

The MMSC board agreed to take on a mortgage to finance this addition, which is expected to cost around $550,000. However the committee requested a $10,000 annual allocation from the municipality to assist with increased operating expenses.

“In order for the corporation to have a buffer to handle the increased expenses from this larger footprint and the provision of increased services to the community, it has requested an annual allocation of $10,000 from the Town of Minto’s operating budget,” the staff report states.

“I would really like to see a commitment from our local hospital – that they agreed to this,” said Elliott.

“I’d like to see something in writing from the recruitment committee, so that I can process it,” Elliottt continued.

“We’re talking half a million dollars. I would like to see something in writing that the support is there before I push forward with this,” said Elliott, who suggested the Palmerston and District Hospital Foundation might be willing to provide financial support for the clinic addition.

“I’m pretty sure they gave a million dollars to the Palmerston one,” added Elliott, who also said he would also like to see a business plan for the facility.

“All the doctors have to all agree to move forward with hiring a doctor and that has happened. So although I don’t have letters from each of those parties, they’re all involved on the recruitment committee, and have all talked about this need to move forward with this. Harriston is growing rapidly as you all know … So I can, by all means, get letters from these organizations to support that, but they’ve all been involved since the beginning and it’s driven by all those groups,” she stated.

Mayor George Bridge said the financial risk to the town is basically non-existent.

“What we’re asking the council to do is to back a mortgage. They’ll never lose money on it because we don’t owe any money on it,” said Bridge.

Duff pointed out council has provided financial support for clinic facilities in Clifford and Palmerston in the past.

“We’ve got two previous examples. One is the Clifford Medical Center, that the town did completely, and … that was a real leap of faith, because we took a gamble and we partnered with the county to expand the building (the County of Wellington Library Clifford branch) and it’s worked out really well,” said Duff. “And then a few years ago the town backed the hospital with the Palmerston rural health clinic (Minto Rural Health Centre),” in order to assist with favourable financing terms, Duff added.

“This one is relatively small and, as the mayor indicated, relatively low risk because it’s going to be backed with real estate,” he pointed out.

Councillor Judy Dirksen asked if the town would be dealing with deficits on an ongoing basis for the clinic “or can these ever be profitable?”

“We don’t have a graduated capital fund for that building at this time,” said Thomson. “However, what we do have is a lot of equity in that property since you’ve taken it over … So if you’re truly looking at it as a balance sheet, you could probably say it’s making money.”

“As a 30-year banker, this is a no brainer investment,” said Bridge, who worked in the financial industry prior to retiring in 2007. “I mean, the property’s worth over probably over a million dollars if not more and we’re going to have a $500,000 mortgage on it and if we ever had to borrow against that again to do some more repairs, the corporation could do that,” he added.

Bridge said there is no need to consult with hospital officials on the need for more physicians.

“The hospital is, through doctor recruitment, saying they need more doctors,” he explained.

Councillor Mark MacKenzie said he sees “a lot of merit” in the proposal, but said he would like to see more “hard background stuff on this to justify it to the ratepayers.”

“I look at it from the standpoint, we looked after Palmerston and we looked after Clifford. It’s time to look after Harrison, but if you guys don’t want to look after Harriston, that’s up to you,” said Bridge. “But I think we’ve got all the background … and we can nickel and dime it, but at the end of the day, I don’t know why we wouldn’t want to get going on this, because I really want to make sure we secure the doctors that this community will need going forward,” Bridge added.

A motion to defer a decision on the request for financial backing and the $10,000 allocation was defeated, with Elliott and MacKenzie in favor and Bridge and councillors Judy Dirksen and Geoff Gunson opposed. Councillor Jean Anderson was not present at the meeting and deputy mayor David Turton declared a conflict of interest and did not participate in the discussion or votes on the issue.

A motion to remove the approval of the $10,000 allocation from the motion and instead make the allocation subject to future consideration was approved in a recorded vote, with all council members present in favor.

A motion to provide a guarantee for a mortgage to fund a building addition on the medical centre was approved in another recorded vote, with  Elliott and MacKenzie opposed and Bridge, Dirksen and Gunson in favour.