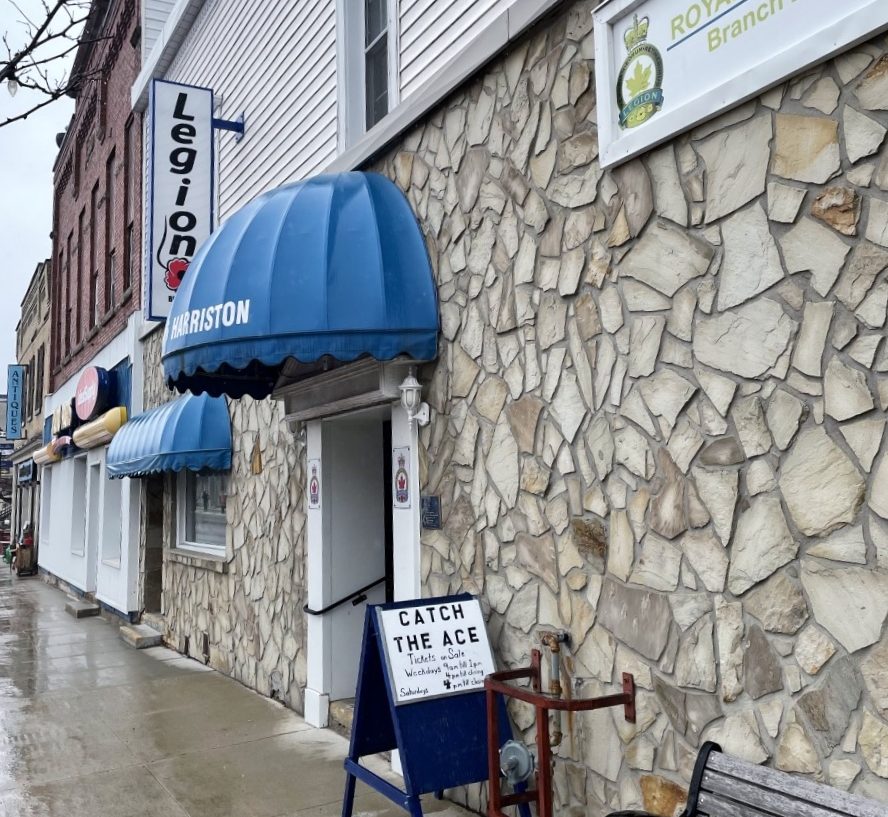 The Town of Minto has approved a $20,000 allocation from its 2022 CIP funding to assist with a project to restore the elevator at the Harriston Legion building. Photo by Patrick Raftis

HARRISTON – The Town of Minto has allocated $20,000 from the 2022 structural grant component of its Community Improvement Program (CIP) to assist Harriston Legion Branch 296 with funding to bring an elevator in the building back into operation.

The allocation brings to $40,000 the amount of funds the town has set aside to assist with the project if needed.

The elevator at the Legion’s Elora Street building has reached its life expectancy of 36 years and in May 2021 the Legion was informed it is no longer safe to operate, states a report from economic and community development director Belinda Wick-Graham.

“This has created a significant accessibility hurdle for many of the seniors and those that are physically challenged to be able to access the upstairs hall which is used for many of the important functions held at the Legion,” states the report, presented to council on March 1.

In October, the Legion was granted $20,000 towards the project from the town’s Community Improvement Program, Structural Fund.

However, Wick-Graham reported the Legion recently learned an application for Trillium funding was unsuccessful and Veterans Affairs Canada has advised it has no programs the project fits under.

The Legion has applied to the County of Wellington as well as another federal grant, the report indicates. If successful those grants would total $27,000.

“This would still leave the Legion having to raise $97,960. The grant of $20,000 in 2022 would go a long way to support this organization and the installation of the elevator,” the staff report indicates.

The report adds, “The Harriston Legion is in the heart of Harriston’s downtown. The facility hosts many special events and activities, as well as … the annual Remembrance Day service.

“The Legion is a constant partner in Harriston Rising projects and on numerous occasions has donated to local groups and organizations.”

Councillor Mark MacKenzie suggested deferring approval of the funding until the Legion has completed further planned grant applications and learned the results.

MacKenzie said he was advised by Legion officials they are planning to reapply for funds through the Ontario Trillium Foundation and also through a federal accessibility program.

“I think they probably will get some good results after the two more applications and we could discuss it again then,” said MacKenzie.

Wick-Graham replied, “The only issue is our grants are first come, first serve. So if we do not approve this, and if you wait … and they don’t receive funding from those other organizations, we might not have that $20,000 earmarked for them, which would be unfortunate.

“I’m not sure how long they want to continue to wait to do this.”

Wick-Graham explained the funds would not be released until the project was completed and receipts were provided.

Mayor George Bridge pointed out the town would essentially be “parking” the money should it be needed.

“If they don’t need it … that’s fine, too, then we’ll put it to some other use, right? ‘What if they’re short?’ is what we’re saying,” said Bridge.

Councillor Ron Elliott asked, “Have we any idea what kind of money they’ve got their bank accounts?

“I know they do (Catch) the Ace and make good dollars on that. And I’m not sure where they’ve donated their money back and maybe they have enough money in their bank account to be able to cover more of this than what we think.”

Elliott added, “I’m not questioning their integrity, I’m just wondering if we ever asked that.”

Bridge replied, “We’ve done this before, we’ve gone down this road and if people are asking for money then you’ve got to realize that they don’t have it themselves …

“And this is a big project. This is in the hundreds of thousands.”

Bridge continued, “Hopefully they can get the rest of the funding. If not, then they might have to come back to us for other avenues.

“Because without them fixing this elevator, I can tell you right now, their revenue goes south because they can’t get upstairs. And you know, they’ve been in COVID and everything else …

“I don’t want to put any roadblocks up in front of the Legion in this case. And I don’t think we’re gambling any money because if the project doesn’t start, the money doesn’t go out.”

Deputy mayor Dave Turton pointed out money earned through the Legion’s Catch the Ace lottery is earmarked for community donations.

“Both Legions (in Minto) have had the same issue as everybody else over the last two years. They have not been able to raise money.

“And I do know that the elevator has been a problem for a number of years and … we’re supporting where we need to support.”

“Do we know how much the Legion’s going to put toward the project?” asked MacKenzie.

“They’re trying to raise as much as they can,” said Wick-Graham.  “They’ve applied for all of the grants. They’ve asked us about possible grants.

“We sent them to places, they talked to (Perth-Wellington MP) John Nater, they’ve applied for all the possible grants they can.”

A motion to allocate the funds was approved unopposed.

Fallis, Fallis and McMillan was also awarded an $800 facade improvement grant under the CIP.