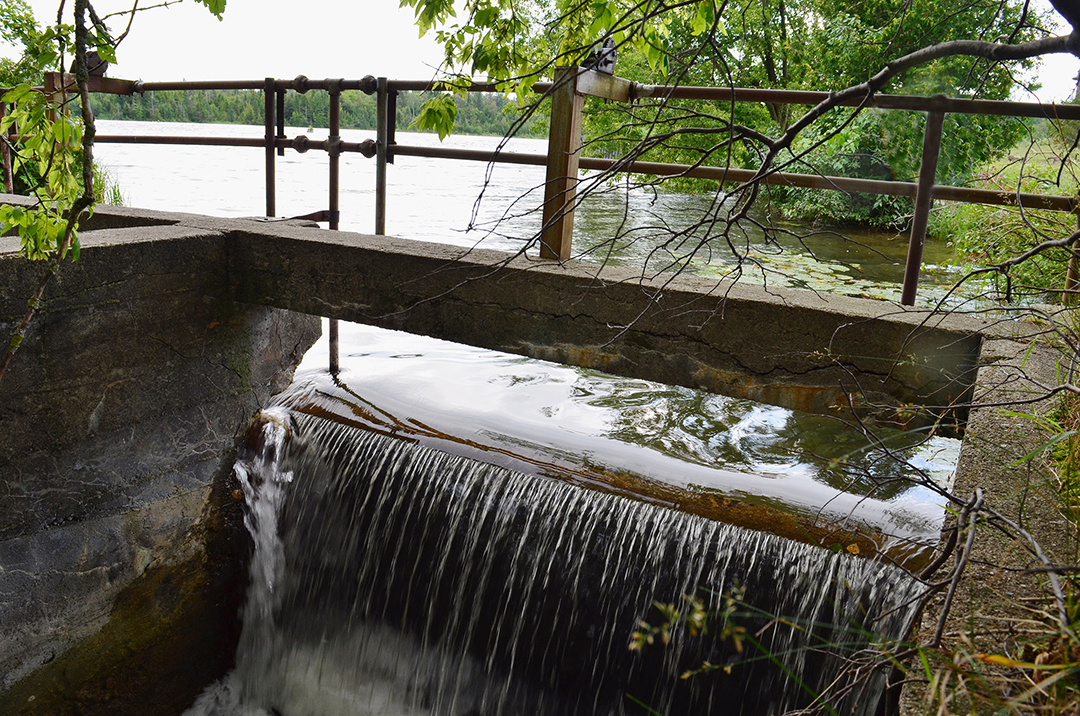 Long story - The Station Street water control structure is owned by Wellington County, while the earthen dam, bridge and road are owned by the town. The bridge was built in 1917 and has been in need of replacement since 1973. Photo by Phil Gravelle

ERIN – Town councillors are concerned that reconstruction of the Station Street bridge and dam in Hillsburgh could be delayed, and grant money lost, because of difficulty in getting permission to proceed from Credit Valley Conservation (CVC).

Council received an update on the process at its April 2 meeting from Triton Engineering.

Construction was scheduled to start on June 3 and be complete by Nov. 29, but delays in getting permits to proceed could push the start date into July, with completion delayed until next year.

Erin received a $1.5-million Ontario Community Infrastructure Fund (OCIF) grant to cover much of the cost of the project, but the funding could be lost if it is not used by the end of 2019. An extension was requested, but denied.

The town wants CVC and the Ministry of Natural Resources and Forestry to complete reviews quickly, instead of within maximum review periods.

“MNRF and CVC are aware of the urgency and the potential loss of funds,” said Chris Clark of Triton, who added CVC and MNRF have been generally cooperative.

But Mayor Allan Alls said he believes the process has been deliberately slowed.

“The CVC have not minced words,” he said. ‘They wanted the dam gone from day one, and I suspect there are some reasons why this is going down as slow as it is.

“I can understand the sensitivity of this, but I’ve reached the end of my limit. This is bureaucracy at its worst.”

Councillor John Brennan said the CVC held up the EA approval for about one year with a Part 2 order appeal, and have not been willing to share all of its technical data.

“Now we have to do more work now that they’ve twiddled their thumbs for all that time. That doesn’t seem very fair to me,” he said. “The deck is loaded against us.”

Alls said later in an interview, “The reason we can’t get things done in this country is we get the civil servants arguing amongst themselves about what is right and what is wrong, and they justify their jobs.”

Clarke said materials are being purchased ahead of time to use the OCIF money. He also noted that ongoing study has determined a low hazard potential for the dam.

When the province approved the Environmental Assessment, the town was obliged to consult with CVC on the design, to ensure safety and decrease potential impact on fish and wildlife, plus a monitoring program. Mitigation measures must be posted on a public website.

Preparation work, which is wrapping up currently, has included a mitigation measures feasibility study, a dam safety review, a geotechnical report, ecological mitigation plans and a groundwater monitoring plan.

CVC favours the construction of a passageway to enable fish to bypass the dam, and a bottom-draw water control, that would release cooler water from the bottom of the pond instead of its surface, which could benefit fish downstream.

Alls said discussions continue on these measures. He said the bottom-draw would be feasible, but may not make enough difference to be worthwhile.

He said the pond is so shallow that there is not much temperature difference between the surface and the bottom.

There have also been cost-sharing discussions with the county, which owns the pond and water control structure. The town owns the road and earthen dam.