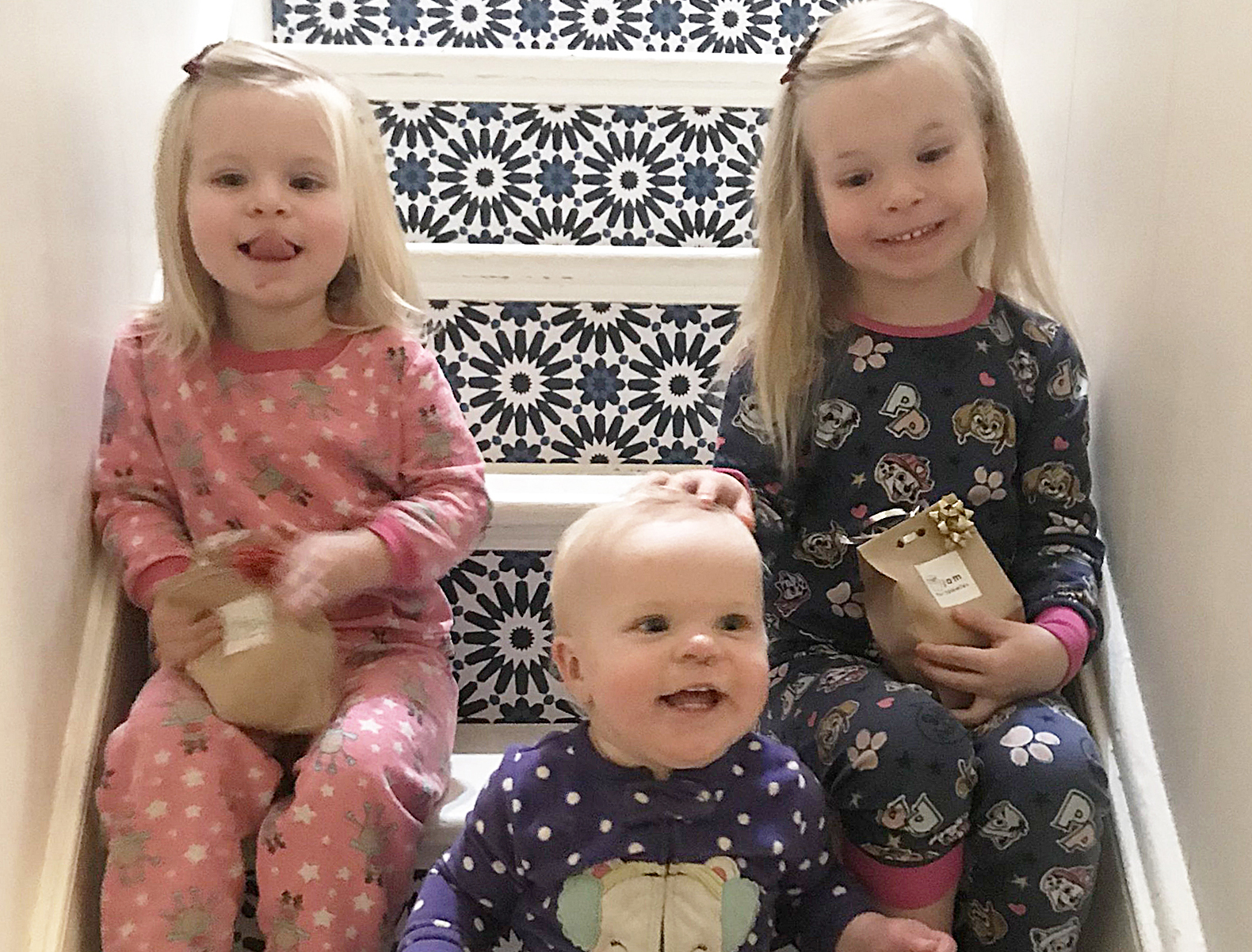 These girls are selling jam and using the proceeds to purchase children's pajamas, to donate to local women's shelters in a project called Jam for Jammies. From left, Etta, 2, Louise, 10 months, and Charlie, 4. Submitted photo

GUELPH/ERAMOSA – Trying to teach her daughters about being kind and sensitive to the plight of others has gotten Mary Meads into a jam.

But she’s the first to admit it’s a jam she’s happy to be in, despite being currently up to her elbows in, well, jam.

“We talk to our kids a lot about privilege and giving back,” Meads said in an interview.

“I asked Charlie what is one thing she has that every child should have, and she said jammies. So that’s where this started.”

The project is called Jam for Jammies and while Meads is eager to say Charlie, 4, and Etta, 2, are in charge, and that 10-month-old Louise is a big help, it’s really falling to Meads.

She is selling jars of homemade jam and using the proceeds to buy children’s pajamas, which she is donating to Women in Crisis of Guelph-Wellington and the Rural Women’s Shelter.

And boy, has it taken off.

Meads said she thought the sale would only go as far as family and friends, but the reach of the project has gone much further.

Jam for Jammies has pre-sold 200 jars of jam and will be taking orders until Dec. 10, “then I’m out,” Meads said with a laugh.

Already she has purchased 47 pairs of pajamas and thinks that might be more than the women’s shelters can use.

In that scenario, she’s also looking at donating pajamas to neighbourhood groups that distribute hampers to families at Christmas.

With the swelling demand for jam, Meads has recruited her mother and some friends to make jam as well.

It’s not a stretch to make jam in her household, Meads said, adding it’s a fun thing to do in the summer and so nice to have fresh jam in the middle of winter.

But interest in the project has gone beyond her wildest expectations.

Meads owns Wellington Music Therapy Services, a job that takes her to retirement and long-term homes to work with seniors through music.

“Because of the work that I do, we talk about therapy and social justice all the time at home,” she explained.

“We’re not rich but we have a home, we are healthy, we have what we need. I want the girls to understand the whole notion of privilege and the duty to give back.”

Meads said the project has also lifted her own spirits as the community has really rallied around the project.

“I think people really want to give,” she said. “I think people are generous and want to find ways to give back. I think this many orders shows that.

“When you call for help, people step up.”

The jars of jam sell for $5 and come with packaging made by the girls. Meads said she could use some four-ounce mason jars if anyone has some to donate.

She’ll be taking orders until Dec. 10. Email jamforjammies@gmail.com or visit their Facebook page.