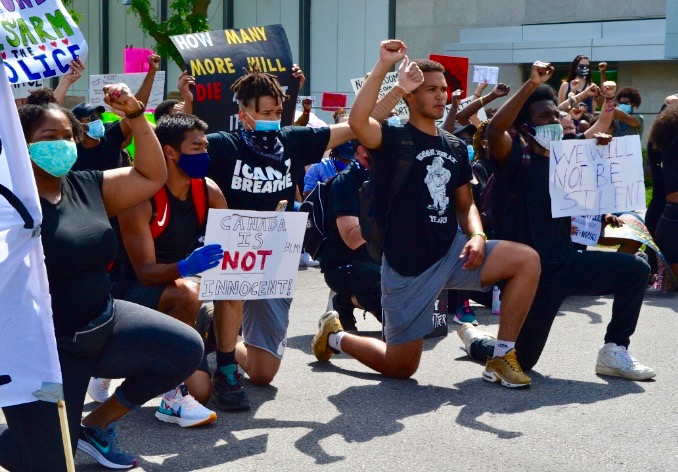 Protesters take a knee in front of the Guelph Police station during the Black Lives Matter protest/march in the city on June 6. Thousands of people attended the peaceful rally organized by the Guelph Black Heritage Society. Photo by Joanne Shuttleworth 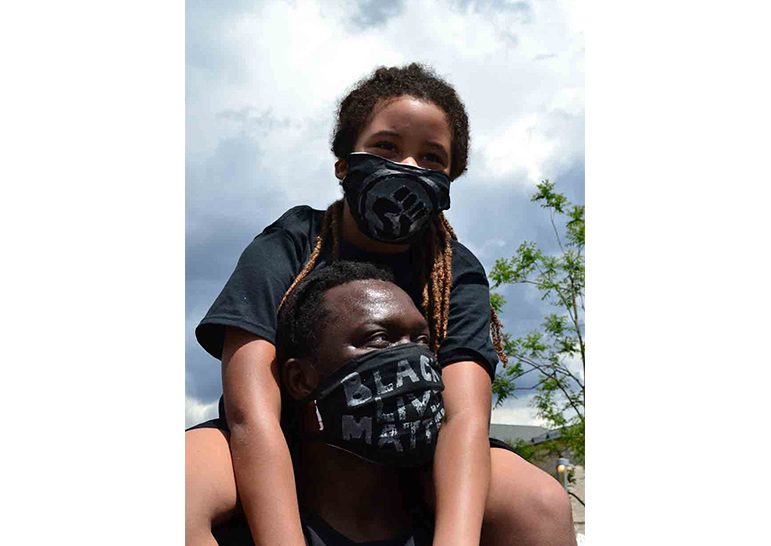 Participants of all ages took part in the Black Lives Matter protest/march in Guelph on June 6.
Photo by Joanne Shuttleworth 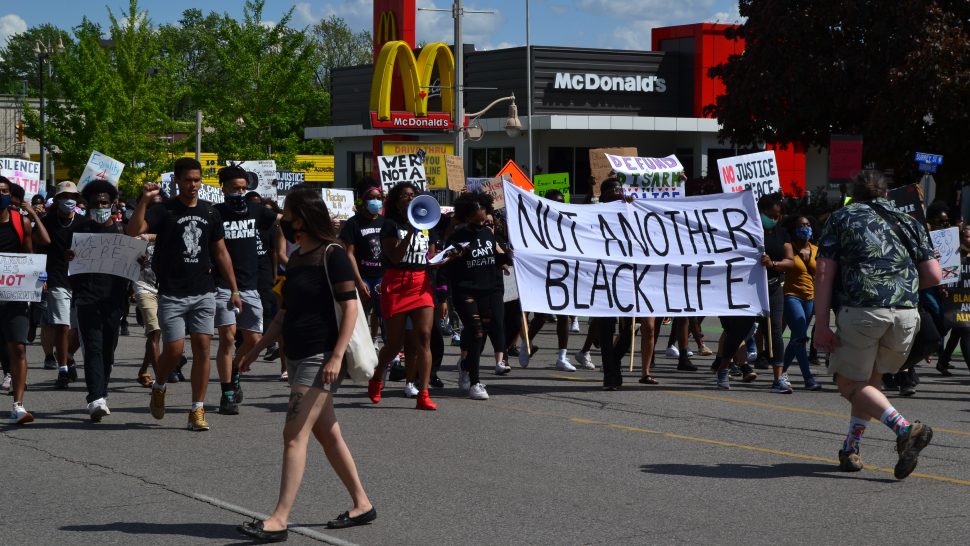 Thousands of people marched in downtown Guelph during the Black Lives Matter protest on June 6. Photo by Joanne Shuttleworth 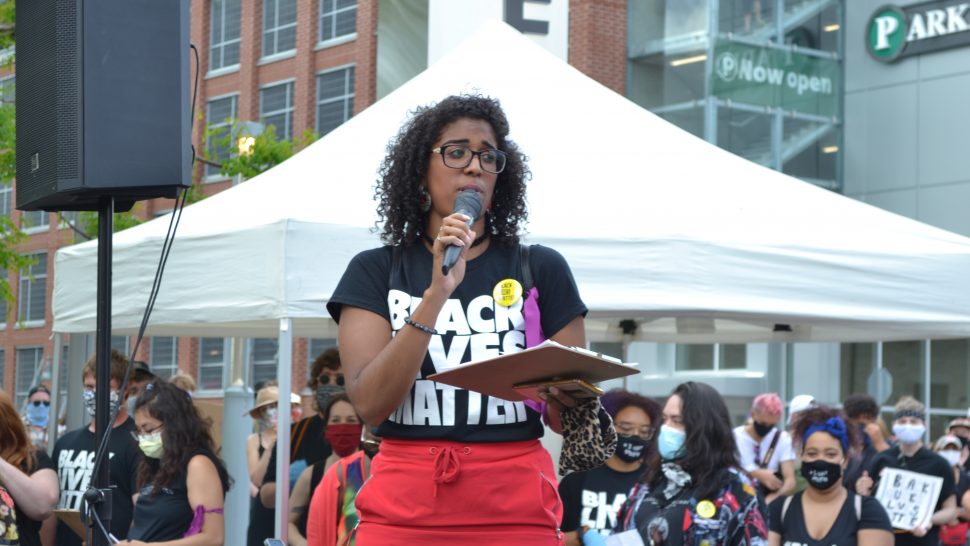 Kayla “Kween” Gerber was one of the speakers at the Black Lives Matter protest/march at city hall in Guelph on June 6.
Photo by Joanne Shuttleworth 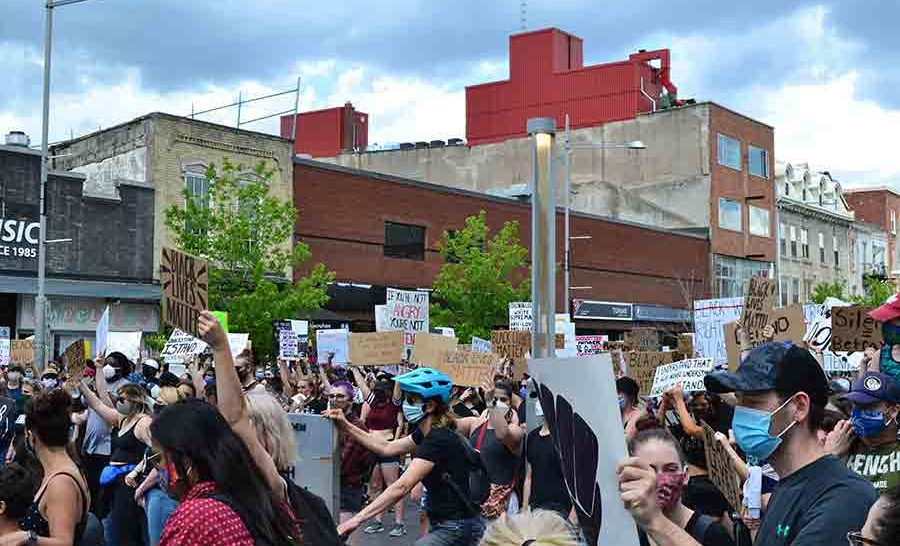 Thousands of people attended a Black Lives Matter protest/march in Guelph on June 6. The peaceful rally, organized by the Guelph Black Heritage Society, included speeches and music prior to the march, which started at city hall. Photo by Joanne Shuttleworth 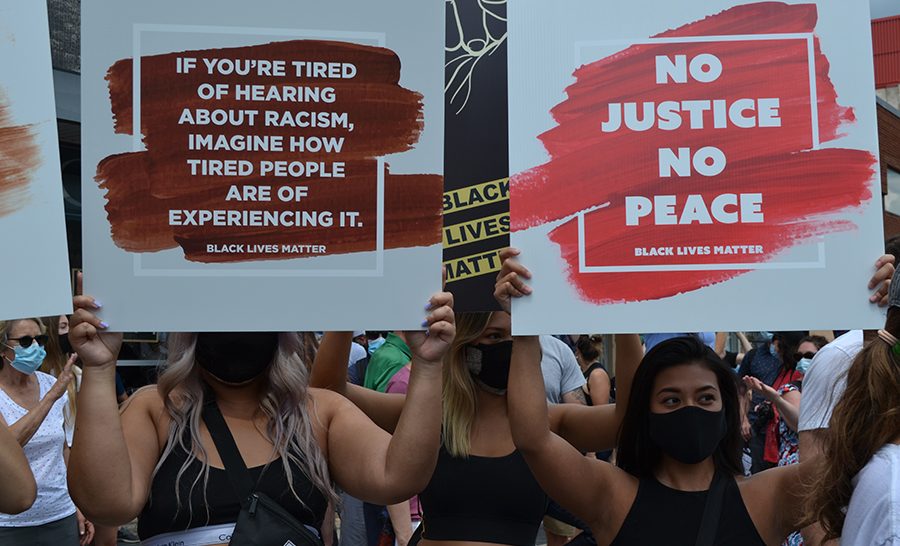 There were many signs on display at the Black Lives Matter protest/march in Guelph on June 6. Photo by Joanne Shuttleworth 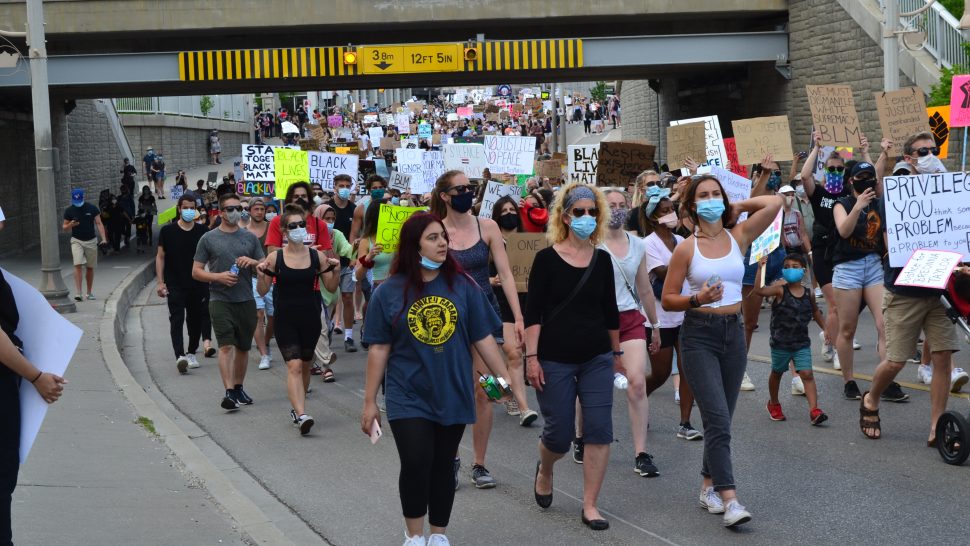 GUELPH – The Black Lives Matter message was spoken, sung, shouted and roared through the streets of downtown Guelph on Saturday afternoon in a passionate and peaceful demonstration that began outside city hall.

The public demonstration, the first since the COVID-19 pandemic struck, drew at least 2,000 people – some say as many as 5,000 – and filled Market Square and Carden Street from Wilson to Wyndham streets and beyond.

People carried signs and wore T-shirts with messages like “Defund the police,” “No justice, no peace,” and “I understand I can never understand, but I stand.”

Almost all wore face masks, but physical distancing was impossible.

Many noted the energy was powerful and it was emotional to be in such a large crowd, at such a historic time, for a cause sparked by such horrific events.

“Today we are here to stand for something we believe in,” said Kayla Gerber, also known as Kween, one of the chief organizers and MC of the event.

Xico Tencatl Maher Lopez gave the land dedication and noted “that since 1492, Black and Indigenous cultures have been entwined… At the beginning of slavery, four million indigenous people were enslaved alongside Black people.

Marva Wisdom, a member of the Guelph Black Heritage Society that also organized the event, said while the decades-long struggle has been exhausting, “you coming here in the numbers you have, have become fuel igniting the fire …

“This community can be an example to Canada and the world – a template of respect and a community that takes decisive action.”

Musician Andrew Craig said that while he has suffered at the hand of police, he wanted to share a positive experience, where a white police officer diffused a situation by not jumping to conclusions about the Black man he encountered.

“I said to him, keep doing that, even when your colleagues do not,” stated Craig.

The crowd then marched through the downtown core, pausing to take a knee in front of the Guelph Police station.

Police monitored the march and stopped traffic so marchers could proceed.

In a pause in the march, Wisdom said as a middle-aged Black woman in Guelph, she hasn’t had the experience with police that young Black men have.

The experience of being stopped just for being Black is real however, and she worried the simmering anger could flare.

“I know the police are listening and hearing what we are saying,” she said.

“The (police) leadership has been reaching out to the Black community, asking what they can do. That’s a good sign and a totally different conversation (from the U.S.).”

But it’s time for action now, she said, before violence erupts here too.

“This is not an exercise in civic democracy,” said Wisdom.

“This is a call for systemic change. And it has to start now.”