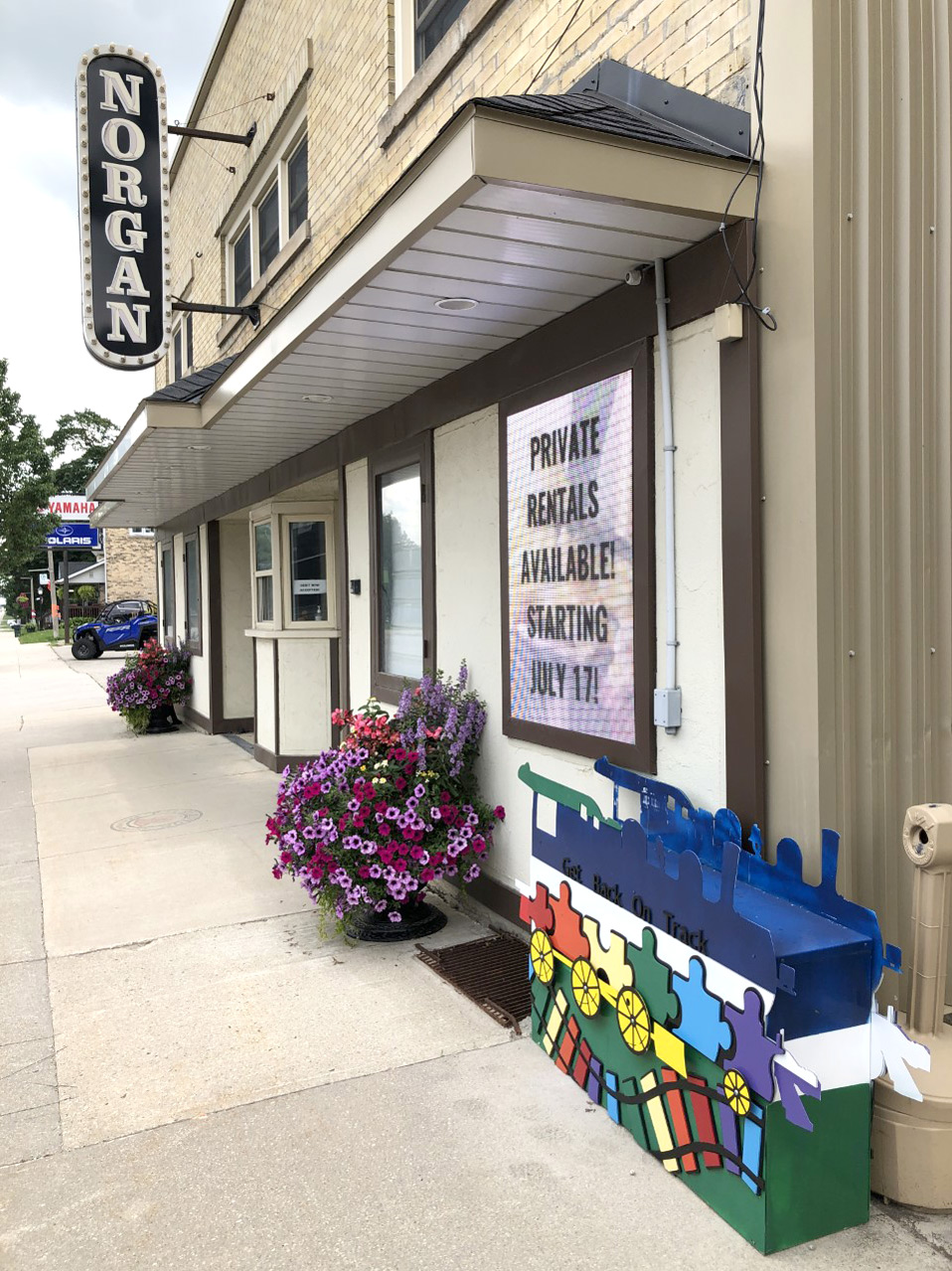 Showtime - Regular public movie showings at the Norgan Theatre in Palmerston are expected to resume in early August. The theatre is currently open for private rentals. Photo by Patrick Raftis

WELLINGTON COUNTY  – With the province moving into step three of Ontario’s Roadmap to re-open on July 16,  the focus is on resumption of additional indoor activity with larger numbers of people allowed.

In the Town of Minto, step three means municipal facilities such as the Norgan Theatre and Palmerston Railway Heritage Museum will be able to welcome patrons and visitors once again.

“It’s great because it means a lot of indoor facilities can be open,” said Minto recreation services manager Matt Lubbers.

“Step one and two were primarily focused on outdoor recreation, parks amenities and things like that. So three gives us some clarity on what can or can’t be done inside.”

The Norgan Theatre, a local movie house owned by the town but operated by community volunteers, will open for private rentals as of July 17.

“Our plan is two resume the weekend of August, 6, 7, 8 … Part of that is to just get things ordered. We basically haven’t carried any inventory for the concessions because it would all get spoiled,” he explained, adding “getting the volunteers kind of reassembled” will also take some time.

Lubbers noted the Norgan Theatre and Palmerston Agricultural Society are also planning to host an outdoor showing of the animated movie Scoob! on July 23 (rain date July 24) at the Palmerston Fairgrounds. However, for live entertainment, the re-opening timeline is still unclear.

Artistic director Alex Mustakas said now that the province is into stage three, Drayton Entertainment is beginning to plan for its reopening.

“We anticipate maybe soft openings in late fall with a couple of smaller shows, and then by Christmas we’re into pre-pandemic levels of programming, assuming we aren’t into a new wave of transmissions,” Mustakas told the Community News.

While some theatres, both professional and amateur, are planning outdoor performances this summer, Mustakas said such shows are not a viable option for Drayton Entertainment, pointing to the unpredictable Canadian weather and financial concerns, as revenue from ticket sales would still be unlikely to offset operating costs.

“We’d rather wait and do it right,” he said.

Drayton Entertainment, which operates seven venues across Ontario, has not held an in-person performance since March of 2020.

The Town of Minto also recently announced that the Palmerston Heritage Railway Museum will be open for visitors by July 21.

While indoor gatherings at municipal facilities will  be allowed in step three, Lubbers noted limitations will be based on hall capacity and potential for physical distancing.

“If your reduced capacity is 90, but you can only physically distance 60, well then 60 prevails,” he pointed out.

Lubbers said staff are currently looking into how resumption of indoor sporting activities, such as ball hockey or pickleball can be handled.

“It appears as though the mask mandate remains in effect inside for the time being. So we’re just trying to determine what that means for if you want to resume a physical activity,” he said.

“Definitely we’re up for doing what we can, following the regulations that apply at that time.”

Lubbers noted that with the previous move to step two, there is already more going on in the local recreation scene than last year at this time.

“The ball diamonds and soccer facilities are much busier than last summer because essentially it wasn’t until around the weekend of July 20 or 27 that we kind of got the green light,” he stated.

Lubbers pointed out this year teams were able to practice in step one, with the understanding games could take place in step two.

“A lot of the sports teams and leagues, I think you’re going to see them start up, where some of them didn’t even have a season at all last year,” he predicted.

Mapleton Township issued a notice on July 16 advising that public local facilities are now available for rental use.

“The Township of Mapleton is excited that our community centers are now able to reopen to host your events,” township officials state. Information on booking mapleton facilities  is available at mapleton.ca/explore-play/facilities/community-halls.

The county announced on July 19 that the Wellington County Museum and Archives will reopen on July 23 and county libraries are expanding capacity limits. For more information visit wellington.ca.

– With files from Curtis Gordon