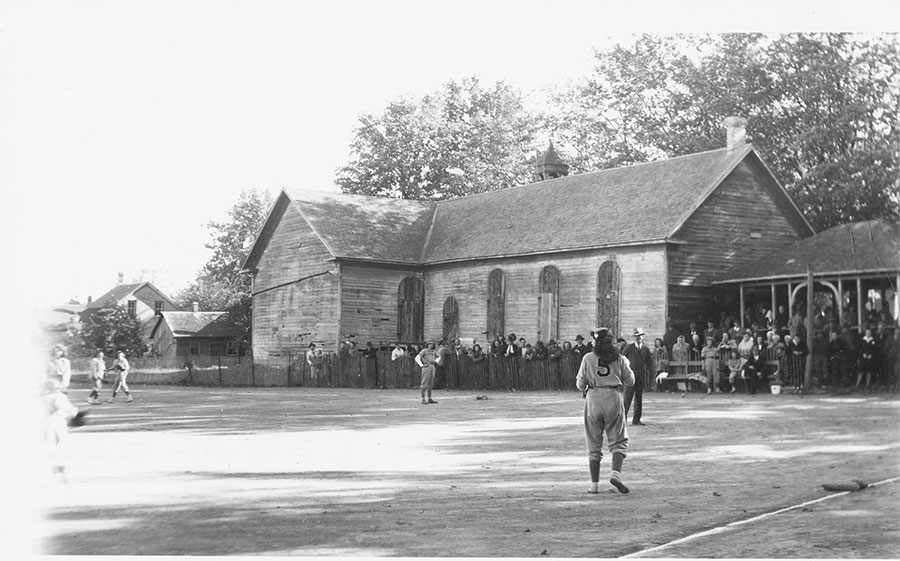 A while ago a reader dropped off a photograph of the Elora Ladies Softball team, taken in the 1950 era. This set me off on a new path.

I spent a few hours poking among the existing records, and was surprised at how little there is on organized women’s athletics in Wellington County 40 and more years ago.

Only a couple of photographs seem to exist, and there are no other documents in the archives. Even newspapers of the time gave only sporadic coverage to the teams.

Men’s baseball has a very long history in Elora. I have accounts of informal games played in the late 1860s. A formal team, the Elora Athletics, began in 1870, in a league that at various times included Alma, Palmerston, Guelph and Galt. This, like other 19th century leagues, was strung along the railway line.

For a time there was a second local team, the Salem Unions. After 1876 the Elora team was known as the Clippers. These games seem to have been rather wild affairs: in one Elora defeated Alma 50-39, and few games had less than 30 runs scored.

The organization of George Sleeman’s highly successful and well funded Guelph Maple Leaf Club in 1875 helped popularize baseball locally, and there were dozens of organized teams in Wellington County up to the World War I era.  All, so far as I am aware, were men’s teams.

Women’s athletic endeavours seem to have been restricted to croquet, which was very popular in the 1870 to 1895 period. When bicycling became popular in the 1890s, a large number of women quickly took up the novelty. This alarmed fogyish commentators, who thought that women’s constitutions were too fragile for such rigorous activity.

There were no local organizations for croquet. The cycling clubs staged races, but these were for men only.

After going into a decline for about two decades, baseball came back strongly in the 1920s. Women in Elora began playing softball on a significant scale after 1920, and they soon had a separate diamond.

For the first time, an organized women’s softball team took to the field. They played teams from other towns, but I have discovered little about this organization.

Another women’s team was organized in 1948, this time under the sponsorship of the Elora Legion. This team played in Group 4 of the Western Ontario Amateur Association, competing against Palmerston, Listowel, Monkton, and Newton.  The Elora lineup included Darlene Brown, Wilma Waters, Shirley Biernes, Eunice Williams, Shirley Rogers, and Dorothy Fraser. Bill Hillis coached the team.

The Elora women ended the season with a respectable record in 1948, and did even better in 1949 when they were eliminated in the playoffs by Newton. Their league now included teams from Atwood and Linwood.

A number of the players from the 1948-1950 team still live in the area, and they have an assortment of recollections about their softball careers. Collecting and compiling the oral history of women’s softball would make an excellent class project for one of our local schools. I offer this as a challenge to the teachers.

While looking over the scant records of women’s softball in Elora, I spent a little time looking at other towns. One of the hotbeds seems to have been Clifford.  There were popular and successful teams there in the 1920s.

In 1949 the Clifford Swing Skirts won the WOAA final against Kincardine. Had they not been eliminated by Newton, the Elora women would have played against Clifford.  The final game in Clifford drew a crowd of over 800, equal to the population of the village. In the latter part of the season, the Clifford women’s team attracted more fans than men’s baseball.

In the mid 1940s Fergus entered a women’s team in the Guelph Industrial League. Their name, the Thistlettes, would cause present-day feminists to bristle. Players on this team included Marg Chapman, Ruth Nixon, Doris Oakes and Dorothy Grieve.

The 1945 version took the championship, a trophy donated by the Matthews-Wells Company (a long-gone business on Victoria Road that produced Rose Brand pickles and jams). The final game attracted a good crowd, despite bad weather and competition from the World Series final between Detroit and Chicago.

Local history means little when it is not placed in a larger context. It is important to know what is unusual or unique about the local experience.

For women’s softball, the record is sketchy, and it is impossible to know if the local record differs from that of other towns in Ontario.

Why did these teams ebb and flow? Who inspired them in the first place? Much of this history is still within living memory.

I hope that softball players and fans will put the full story on the public record.

*This column was originally published in the Fergus-Elora News Express on Nov. 20, 1996.