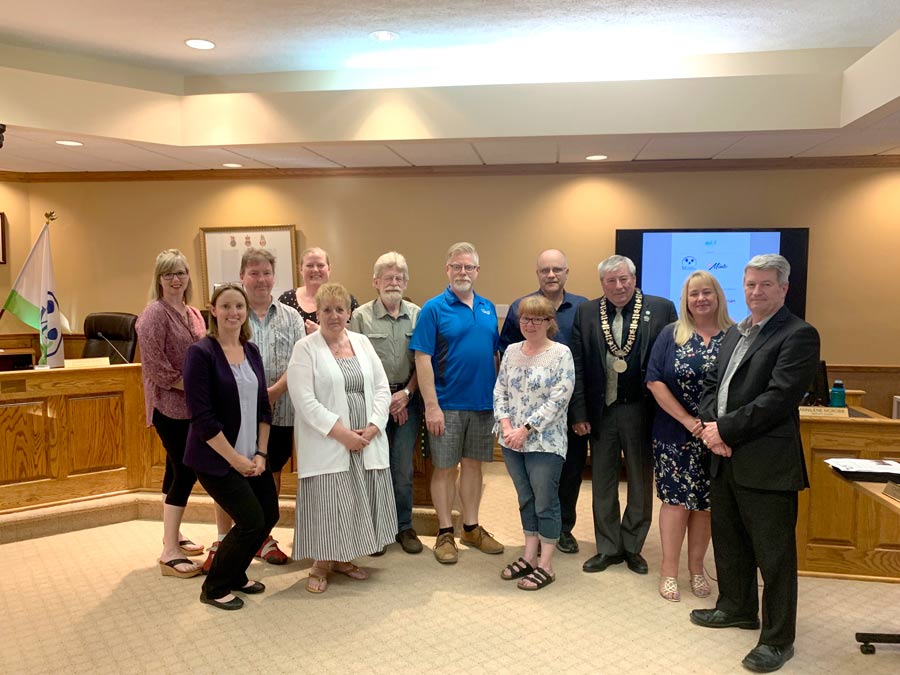 Pitch It! finalists - The Old Post and Escape the Old Post was pronounced the winner of the 2019 Pitch It! 2.0 Business Plan Competition at the June 18 Minto council meeting. Finalists, judges and officials on hand included, from left: front, Minto economic development manager Belinda Wick-Graham, Elaine Young of What’s Inside the Box and Trish Riley of Nadur; back, Liz Felix of Intuitive Health, Chris and Lisa Brady of Animated Media, judge John Burgess of the Minto Chamber of Commerce, judge Rob Mattice of 88.7 The River, Michael Hendrick of The Old Post and Escape the Old Post, Mayor George Bridge, Janet Juniper and Kevin Brown of Country 93 (sponsor). Submitted photo

MINTO – The winner of the 2019 Pitch It! 2.0 Business Plan Competition is The Old Post and Escape the Old Post.

The business, which  is owned by Michael and Sue Hendrick of Harriston, was announced as the winner at the June 18 Minto council meeting.

The entry consisted of expansion plans to create and operate a second escape room in the basement of the Old Post, as well as the construction and operation of a unique meeting room named The Post Script.

“Escape the Old Post opened in January of 2018 and to-date has served over 3,500 people and received very positive reviews and helped raise awareness of Harriston and Minto,” states a press release announcing the winner.

The PitchIt! Minto Business Plan Competition started in 2012 in an effort to grow small businesses in Minto and increase awareness of the resources available.

In 2019 the Town of Minto, in partnership with LaunchIt Minto and its sponsors, launched PitchIt! 2.0.

The competition continued to be geared towards entrepreneurs that wanted to open, purchase, expand or  re-locate a business within the Town of Minto. New this year was the addition of not only prizes for the winner and all finalists, but also a pool of prizing that could be customized based on the needs of the finalists.

“Thanks to the support of our generous community sponsors, close to $27,000 in cash and prizes has been awarded in our biggest PitchIt Business Plan Competition yet,” the release states.

Judge Rob Mattice, general manager at 88.7 the River, said, “The new format of PitchIt 2.0 allowed the judges to ‘customize’ a prize pack for each presenter. This gave us the ability to help multiple entrants, depending on what they needed most.

“These entrepreneurs put a lot of effort into their business plans and live pitches so it’s nice to be able recognize each of them with prizing they expressed a need for.”

Seven entries were received and five finalists submitted full business plans and made presentations to the judges in early June.

The five finalists were: The Old Post and Escape the Old Post, Animated Media, Intuitive Health, Nadur and What’s Inside the Box.

“I am delighted to be chosen as a winner from a field of very cool and interesting business initiatives,” said Michael Hendrick.

“The Town of Minto rocks. Their support and encouragement of development is unique and makes a world of difference. With the help of the prizes, The Old Post can move forward with confidence to complete the second escape room and a diverse room called the PostScript.

“The PostScript is a beautifully built meeting/workshop/special occasion space as well as commercial kitchen. Thank you Minto, and thank you judges and community sponsors.”

Entrepreneurs are encouraged to watch for the next PitchIt 2.0 Competition, which will launch in March 2020.