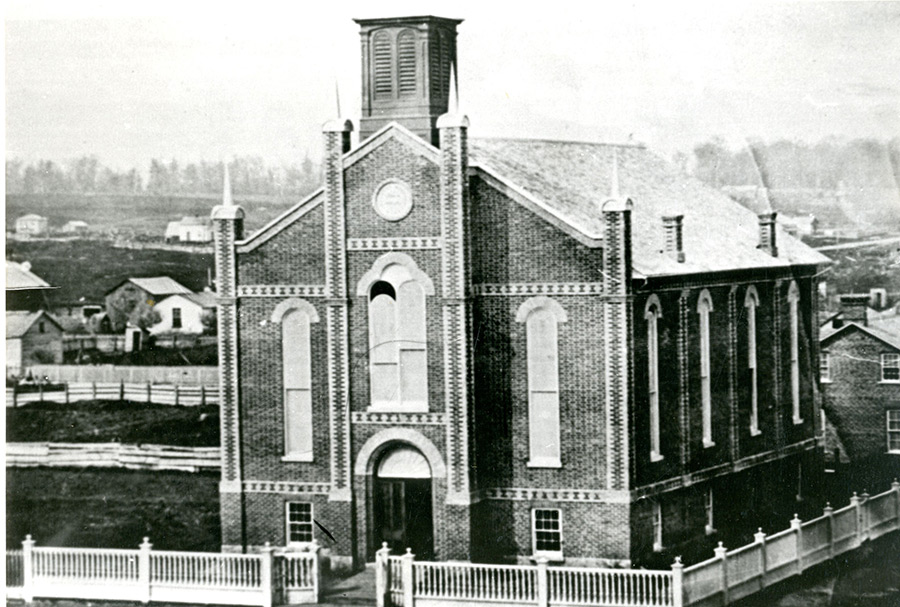 The high point in Elora Methodism – Construction began on this church in April 1862. It was the first of Elora’s major church buildings. The proportions are neoclassical, though the obelisks on top of the columns point to the gothic revival style of church architecture, which was then coming into fashion. The white painted fence, with lathe-turned spindles, was surely the pride of the congregation. The building remains in use as Elora’s United Church. Photo circa 1890. Wellington County Museum & Archives, ph 6544

When we look back to the 19th century, it is easy to underestimate the role of religion in the early decades of our communities, and the profound differences and divisions among the various protestant denominations.

In Elora, the Wesleyan Methodists had by far the highest profile until the 1870s. Methodist preachers began to pass through the area irregularly in the 1830s. Soon they began to use Elora as a base for circuits, as loose congregations formed in neighbouring communities. These saddlebag itinerant preachers attracted a large following, attracting people who nominally belonged to other congregations.

Ezra Adams and Stephen Brownell were the most important of the early local Methodist preachers. Their style leaned heavily to revivalism and millennialism, with sermons sometimes lasting for hours, and culminating with their adherents falling to the ground and shouting.

To these preachers the word was more important than the building, and they were content to make do with whatever facilities were available. The Methodists met in houses and stables. In summer, there were camp meetings on local farms. These normally lasted three days, sometimes longer, and attracted hundreds of people from a wide area.

Stephen Brownell was responsible for providing Elora’s Methodists with a permanent home. He arranged for the purchase of a lot at the corner of Victoria and McNab Streets. The chapel they built still exists, recently restored by Dr. Peter McPhedran (currently a medical office). Although the sources are ambiguous, construction probably started in 1842, though six years later the congregation was still raising money to finish the building.

These financial problems reflect the fact that Methodists deliberately sought out the poorer people in the community. Under Brownell and his associates, they began a Sabbath School to teach basic literacy skills to both children and adults. The classroom sessions early on Sunday morning were free, but the students had to attend the subsequent church service.

The Methodists organized Elora’s first library as part of their school. The Elora Sabbath School Library eventually had more than 350 volumes, a significant collection for the 1840s. For 25 cents per year anyone could use it. The collection was eventually absorbed by the Elora Mechanics Institute, and ultimately by the Elora Public Library.

By 1850 the Methodists operated what we would now call social services, providing aid of various types to the infirm and impoverished. They organized the Gentlemen’s Aid Society, which raised money by holding auctions of donated items. Often furniture and livestock were donated to these auctions. People from other denominations supported these auctions, both as donors and bidders.

At the same time, Methodists sought to prevent people from falling into the mire. Members of the congregation organized the Elora Temperance Society, which argued for the total suppression of the liquor traffic.

By 1860 Wesleyan Methodism had developed improved organizational structures in the province. Elora, as the headquarters of a circuit that stretched past Elmira to the west and into Peel and Maryborough Townships, boasted up to four Methodist ministers. The turnover was rapid. The most memorable of them was the silver-tongued and appropriately named Rev. Samuel Fear. One of his admirers recalled that “I could listen to his sermons for hours.”

Ministers such as Sam Fear did not represent the future of Methodism. Methodists increasingly became embarrassed by the doom and terror messages of old-time ministers and the falling on the ground and shouting that had characterized the revivalism of a few years earlier. Revivalists were shouldered out of the way by better educated younger ministers.

In 1860 the Elora Methodists were by far the largest congregation in town, and had outgrown their small chapel. After months of discussion, they purchased two lots at the corner of Church and Geddes Streets, for the princely sum of $600.

This was the first major church construction in Elora (now the Elora United Church), predating the others by several years: St. Mary’s (1870), Knox (1873), St. John’s (1873), and Chalmers (1877). The gothic revival style had not yet become dominant in 1862. The new Methodist church featured detailing that looked to neoclassical and romanesque styles. Unlike the four gothic churches in Elora, there was no spire. A square wooden cupola over the front door housed the bell.

The congregation awarded tenders in April 1862 to local contractors: William Stafford for masonry work at $1,755 and John Waddell for carpentry and framing at $1,520. Construction costs totalled $5,000 (equal to about $850,000 in 2021 dollars). It was a considerable sum for churchmen who, a few years before, had shunned real estate in their religion. In comparison with the later Elora churches, it was a bargain: Knox Presbyterian cost more than four times as much.

The cornerstone was laid on July 10, 1862, and construction progressed through the fall and winter. There was a tragedy in December, when carpenter Alex Smith fell from a scaffold and was killed.

The opening service, on March 1, 1863, was celebrated with three services by three ministers. Over 700 people packed the church at each one. A fundraising tea the next night attracted 800, making it the largest gathering in the village’s history. Various events during the week raised almost $500 for the building fund.

During the 1860s the Methodists lost some their adherents, but a growing population in Elora more than offset the losses. Capacity problems appeared by 1870. The solution was the installation of a gallery in the church. The contract went to Salem carpenter Thomas Beck in 1871 for $600. This raised the seating capacity to 800.

Under Rev. N.F. English, the Elora Methodists moved closer to the mainstream. English occasionally traded pulpits with other ministers in town. He left Elora in 1872 after the death of his wife.

His successor, Joel Briggs, followed the same course, but within months he was enmeshed in some kind of personal scandal, the precise details of which were never revealed. As the congregation pondered alternatives, Briggs became ill, and was replaced by C.W. Warren, an American from Milwaukee.

Warren had a revivalist style that had not been heard regularly in the church for years. However, it soon emerged that he was wanted in Milwaukee for forgery. There were also outstanding warrants in Ontario. Within weeks he was under arrest.

A more reputable incumbent, A.J. Van Camp, tried to restore tattered Methodist reputation in early 1874. In the meantime, Briggs had lost his mind after being thrown from a buggy. He moved to Toronto, and was found drowned in the Don River in 1875, an apparent suicide.

The Briggs and Warren scandals undoubtedly hurt Elora Methodism. Detractors of Methodism had always detected a streak of hypocrisy, and the scandals confirmed their suspicions. It was symbolic that the scandals occurred when the other protestant congregations were in the midst of building programs.

Also, the sphere of Methodism’s influence had contracted by 1870: its educational, charity and temperance work had been taken over by other groups and institutions. For three decades, though, the Wesleyan Methodists helped steer Elora through its pioneer period.

*This column was originally published in the Fergus-Elora News Express on March 14, 1996.

Thorning Revisited
We use cookies to ensure that we give you the best experience on our website. If you continue to use this site we will assume that you are happy with it.Agree