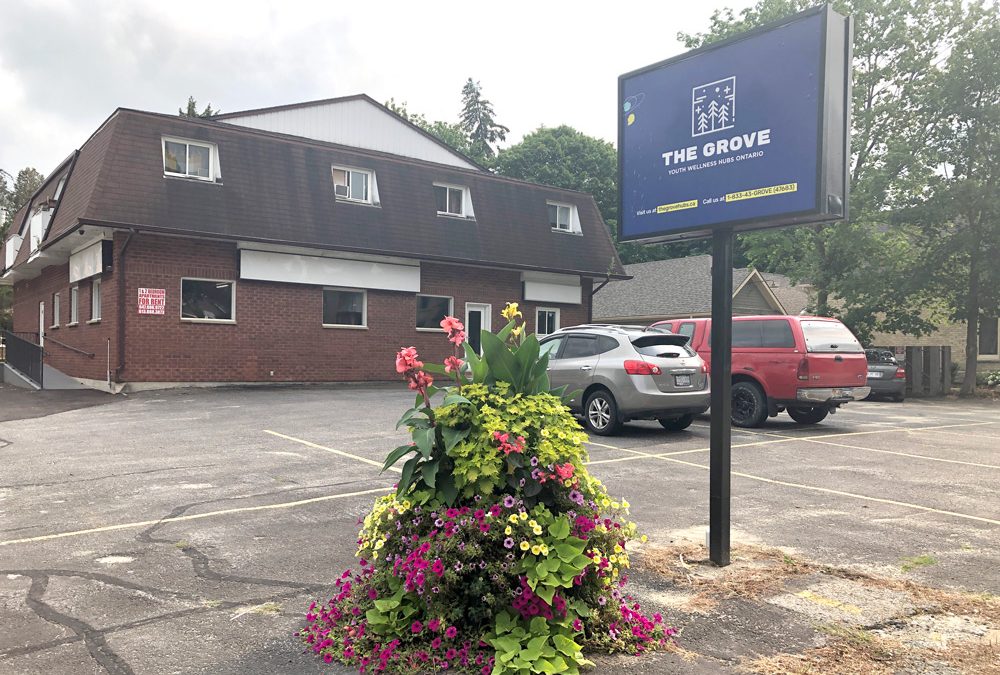 MINTO – The Grove Youth Wellness Hubs across Guelph and Wellington County have helped more than 14,000 youth who have participated in wide range of activities at the hubs since they were launched in mid-2021.

In a presentation to council, Forsyth and Minto youth and wellness coordinator Jessica Martin noted over 90 per cent of youth participating in Hub activities rate their experience as “excellent.”

The five Hub sites in Guelph (two sites), Erin, Fergus and Palmerston have hosted over 10,000 youth for drop-in visits, about 1,800 for recreation/wellness visits, 931 for employment and education-related reasons, 51 for walk-in counselling, 15 for substance abuse support and 12 for 2SLGBTQIA+ support.

The report indicates 629 youth accessed services and activities at the Palmerston site in the month of June alone.

The county hubs all officially opened at various points last summer, but Mayor George Bridge noted the program has been in development for much longer.

“It was at least four years ago that that we came originally with this idea that we could maybe do this and we were coming through a very tragic time,” said Bridge.

“The two of you have been the driving force behind it. So it’s nice to see the report to us tonight,” Bridge told Forsyth and Martin.

In Minto, early steps were a response to a number of suicides, some involving youth, in the community in 2018.

The incidents led to a brainstorming session hosted by the Norwell District Secondary School community in May of that year, bringing together community partners such as the Canadian Mental Health Association, Homewood Health, Minto Fire, concerned parents and Minto Youth Action Council.

That June, the school hosted a “Community Conversation on Suicide,” which led to the formation of a committee focused on the problem and ultimately the creation of Minto Mental Health.

In 2019, the Rotary Club of Guelph proposed the idea of an integrated youth service hub to serve young people across the region, which led to the formation of the local facilities, now among 22 in the province-wide Youth Wellness Hubs Ontario network.

“In 2018, Dr. Joanna Henderson came to speak to the Rotary Club of Guelph. I happened to be in the audience. There was about 85 people in the room, but 20 of us really wanted to drive this project forward,” said Forsyth.

“She described Youth Mental Youth Wellness Hubs Ontario, the model about the integrated, centralized care that’s about intervention and prevention and we loved the idea of being proactive.

“And it was shortly thereafter that I met Jessica, from Minto Mental Health and Mayor Bridge, and we began our journey down this path.”

Forsyth added, “What you have created for local youth is a one-stop shop for youth between the ages of 12 and 26 to have access to a wide range of needs,” said Forsyth.

“They walk in the door, and they can get virtually anything that they need right on the spot.

“Let’s say there’s a service in Guelph, we would connect with that service in Guelph and they would come up to meet that use. We have over 30 service providers that provide anything from resume writing to educational support.”

She continued, “If somebody’s trying to fill out a college application or a university application, to mental health support, to addiction and substance use support as well.

“We have lots of kids coming in our door saying … ‘I have concerns about a friend of mine.’ And we’ve got social workers right on site that can manage that as well.”

Forsyth told council the number of hubs across Canada has expanded from 40 to 69 since the local project began.

“They’re a growing phenomenon because they work,” she said.

Forsyth said having so many service providers on one database is key to the system.

“If youth want to give us permission we can share that information,” she stated.

“So what we have created is a space where youth can say ‘I don’t want that service provider to know about my story, but yes, you can share my information with the social worker at the hub and the social worker at CMHA and maybe the mental health professional at Family and Child Services.’

Martin told council the number of youth being serviced through the hubs is making a difference.

“Just over 14,000 youth through the doors since September is incredible,” she said.

“Where were those youth before this was a space to go? It’s pretty amazing to see and they’re accessing a variety of things, including drop-in counselling services. That wasn’t there before The Grove existed.

‘So it’s pretty impactful to see in our small communities, everyone coming together.”

Martin pointed out recent activity at the Palmerston site has been particularly encouraging.

“There was 629 youth visits in the month of June. And it’s pretty incredible to see because those youth are … coming every day. It’s the space they identify as where they want to go,” she explained. 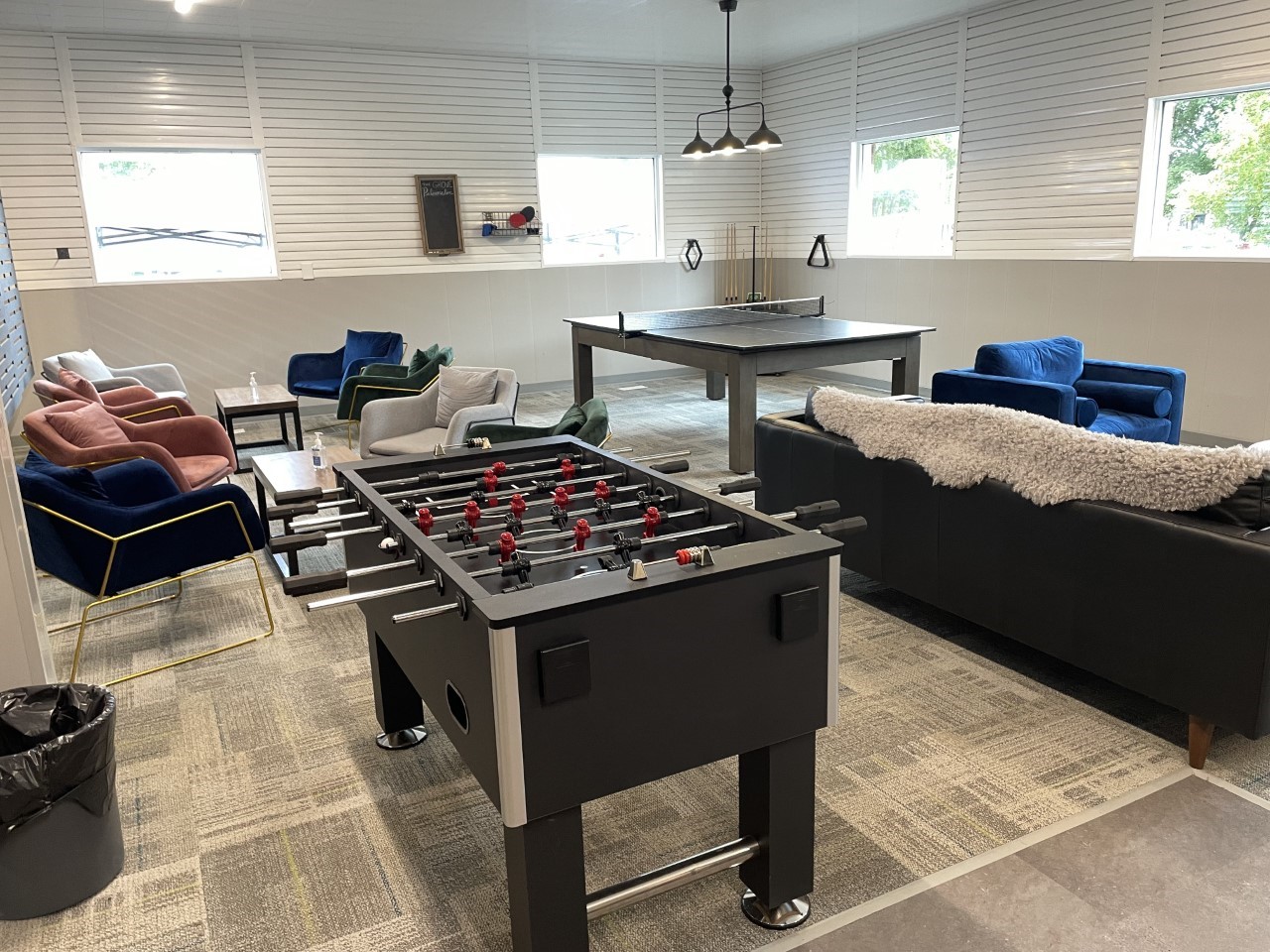 Games room at the The Grove – Palmerston. Advertiser file photo

Martin said the recreational drop-in component of the program compliments the provision of clinical and counselling services.

“That drop-in piece is how we’re getting individuals into the clinical stream. It’s that trust they’re building, the safe space; they’re identifying The Grove as it’s a space to come and hang out,” she explained,  adding youth then feel comfortable turning to Grove staff when they need assistance.

Martin noted The Grove utilizes an Equity, Diversity, Inclusion and Indigenous Reconciliation framework in order to ensure the hub meets the needs of all youth.

“The framework is to make sure that … we’re held accountable for meeting these needs. And for also ensuring the space is a welcoming and accepting place. And it’s ongoing. We’re always learning, it’s always evolving as we learn more.”

An important component of the program is that youth can access services for free.

“Our service providers are allowed to use our space at no cost, as long as they deliver services at no cost to youth. So a youth can come in and access resume writing, the tutoring services that we offer, the whole gamut, at no cost … we’re removing as many barriers as possible,” said Martin.

Forsyth replied, “We have pathways to get them there if they’re in crisis … and we do warm hand-off, so we don’t send a youth somewhere and say ‘Here’s the phone number.’

“We go with them to make sure that they’re safe and they have a warm transition so that they build that trust.”

Councillor Ron Elliott commented the location of the Palmerston hub across the street from the high school has worked out far better than he anticipated.

“In 2019 when you were bringing this forward to council I thought a big mistake was going beside the high school  … I thought there wouldn’t be anybody show up because everybody was looking at it,” Elliott stated.

“Boy was I wrong. I drive by, they are lined up waiting to go in.”

Elliott continued, “I know of a youth that attended The Grove and he needed support and he wasn’t getting anywhere with anything, at school, friends … the parents were really concerned.

“He headed down to your group and he’s made an amazing turnaround. Just a place to hang out, he got some tutoring that he needed … it’s a place that we needed in our community and I had no idea that we needed it.”

“I think this is just the start. I think we’ll see more and more pleasant surprises,” said Bridge.