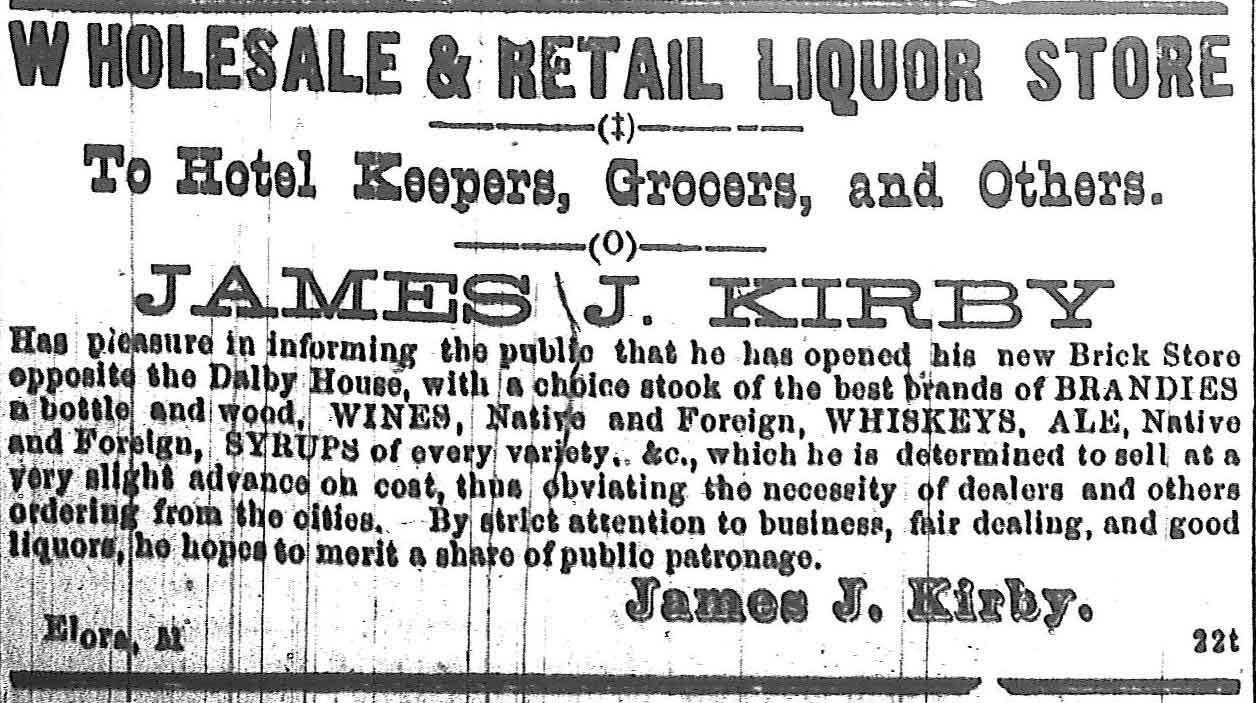 Elora’s liquor store - Several stores in Elora sold liquor in the 19th century, but J.J. Kirby was the most important of them. When he constructed the building at the corner of James and Metcalfe Streets in 1877-78, he had big plans for a wholesale business. The syrups mentioned in the ad were fruit syrups. Lemon syrup mixed with whisky, an early form of the whiskey sour cocktail, was a popular drink in the 19th century. Fruit syrups were also used in cooking and baking, and undoubtedly provided the major source of vitamin C in winter. This ad is from 1879. Wellington County Museum & Archives – Elora Lightning Express, July 31, 1879

Main street buildings are both intriguing and frustrating subjects of historical research.

Tenants and owners can change frequently, and each change can bring a new use for the building. Each change in use results in renovations of a major or minor extent.

A number of buildings in downtown Elora have seen radical changes in uses over the years. One of these is the building at the corner of Metcalfe and James Streets (the former Donut Shop), well known as Resa Lent’s location for the recently closed Desert Rose Café and now The Evelyn.

This part of Elora’s downtown was very close to the old market grounds, but nothing was built on it until the mid-1870s. At the time, the Dalby House, built in 1865, was somewhat isolated from the commercial area of town centred on Mill Street.

In 1873 Elora banker W.P. Newman and Elora Mill owner J.M. Fraser bought the entire vacant block north of James and west of Metcalfe, and divided it into 10 small lots, five of which faced Metcalfe. They were able to sell these lots easily because the exodus from Mill Street was well under way.

James J. Kirby, an Irish Catholic immigrant, purchased the corner lot at James Street late in 1873. He worked as a store clerk, but had ambitions to start his own business, which he did in 1877, selling a line of groceries.

Jim Kirby began construction of a two-storey brick store on his lot in the summer of 1877, but it does not appear that it was complete until late in 1878. Initially Kirby sold liquor, wine and beer, and attempted to build a wholesale business in addition to local retail sales.

In the 19th century each municipality licenced both taverns and liquor stores. The licence fees were very high, and the number of licences was tied to the population. In most years, only two stores in Elora applied for licences, and sometimes Kirby held the only one.

Despite his dominant position in the local market, Jim Kirby did not prosper on liquor sales. This was an era of declining consumption, due both to changes in social customs and to the tireless pressure of temperance agitators. By 1882 Kirby had added a line of groceries.

This proved a wise move: Wellington County voted itself dry, and for a two-year period Kirby could not sell any liquor. The county electorate reversed itself and brought liquor sales back, but Kirby was never again able to rely on booze sales for a major part of his income.

In addition to groceries, Kirby at various times carried lines of boots and shoes, and chicken feed. He was the Elora agent for Goldie’s flour, made in Guelph.

Jim Kirby never became rich, but his resilience in difficult times allowed him to stay in business for 32 years. He was 76 years old when he sold the business in 1909. It ranked as one of the two or three oldest businesses in the village.

The history of the building in the decade after Kirby sold it is somewhat mysterious. It changed hands three times in the course of one year. For a time John O’Neil operated a piano and music store here. George Robinson next owned the property, but I am uncertain about his line of business.

Hugh Weatherdon purchased the building in 1918 as a shop for his tinsmithing and heating business. He was followed by William Prine in 1920.

The structure underwent major alterations in 1923 when George Mortimer purchased it for a service station. This was one of three buildings in downtown Elora to be extensively renovated for automobile sales and service in the post First World War period. Mortimer continued his business at this location for 27 years.

In 1950 Frank Speers bought the building for his expanding appliance and electrical contracting business, which he had started five years earlier in another location. Speers remained here until 1969, when he constructed larger premises on Guelph Road (Wellington Road 7).

Over the next 25 years, the Kirby building served as the original location of Little Katy Variety and, as Lou’s Donut Shop.

This building has never been at the centre of Elora’s commercial district. When Jim Kirby built it in 1877-78, it seemed to be in the path as the retail district migrated from Mill Street. When the dust settled, the new centre was a block and a half to the north, leaving Kirby on the fringe.

More recently, the store has marked the dividing line between the uptown retail area and the tourist area. The 1995 renovation into a cafe-restaurant helped to fill the void in the downtown area, and brought unity to the business core of Elora.

During its 142-year history, this building has been the home of a liquor store, grocery store, music shop, tinsmith shop, service station, appliance store, variety store, donut shop and a restaurant.

As much as any building in downtown Elora, its history reflects that of the larger commercial sector of the village.

*This column was originally published in the Fergus-Elora News Express on March 29, 1995.