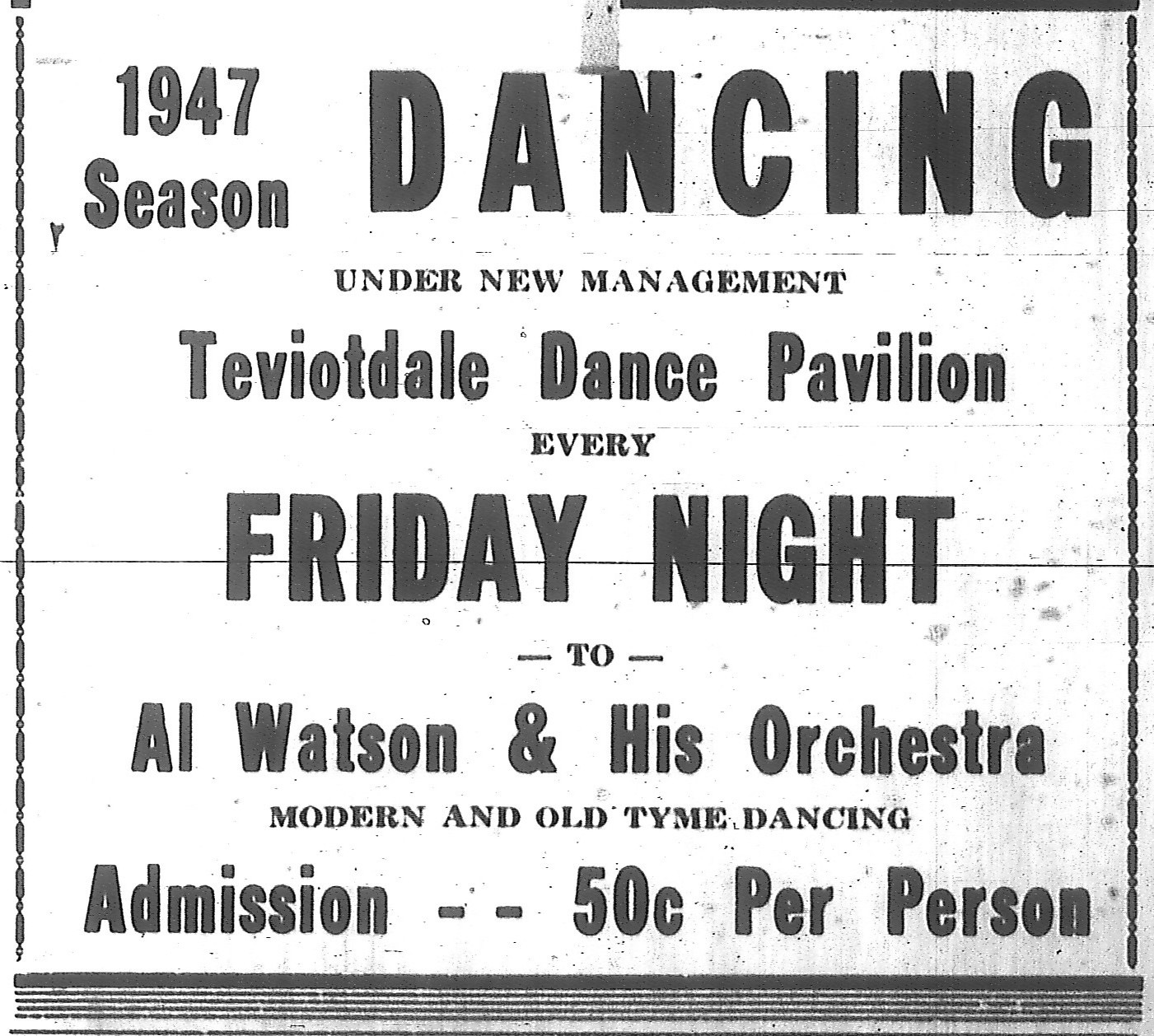 Dance ‘til you drop – The Teviotdale dance hall drew huge crowds from all over northern Wellington County and beyond in the 1940s and 1950s. Originally known as Club 23, the arena-like building was built specifically for dances by Elmer Patterson, a retired farmer. This advertisement, published in the Palmerston Observer, is for the opening of the 1947 season. Al Watson led the orchestra and managed the facility that year, advertising both “modern and old tyme dancing”. Wellington County Museum & Archives image

(Note: This is the second of a two-part look at the hamlet of Teviotdale.)

The burning of the hotel, and closure of a store, the post office, and the Methodist Church within the first decade of the 20th century reduced Teviotdale to a crossroads hamlet, and a minor one at that.

But the place showed an amazing resilience.

Around 1920, Milton Monk constructed a new store at the southwest corner of the intersection. It was a small structure, with living quarters above. This was the first of three stores that would be build and operated at Teviotdale by Monk and his wife.

A Mr. and Mrs. Nelson subsequently operated this store, and then Lloyd Mallett.

The age of the automobile was slow to come to rural Ontario, but in the mid 1920s it arrived with a vengeance. Coping with the demands for new highways and paved roads taxed the resources of both the provincial and local governments in the mid and late 1920s.

A major project of Howard Ferguson’s government was the establishment of a system of provincial highways, built to high standards, and paved. Teviotdale was destined to be a major junction on the system.

In 1925, the province made plans for Highway 9, to run southeast from Kincardine. The first plan was to follow much of the roadway of the old Elora and Saugeen Road, which then was under the jurisdiction of the county. The final route, though, deviated at Teviotdale, swinging east to Arthur and Orangeville. There were numerous protests from the south, particularly Elora and Guelph, but the new routing remained.

Initially, this road remained gravel, with some improvements made in grading. Paving crews arrived in 1930, completing the section between Teviotdale and Clifford that year. In 1931, the section from Teviotdale to Arthur received a hard permanent surface. In 1927, survey crews worked in the area on another new route: Highway 23. This road would run initially from Mitchell to Palmerston and Teviotdale, where it linked with Highway 9.

At Teviotdale, the new alignment required a wider road allowance. One of the victims was Mallett’s store, which the government purchased and demolished to make way for the roadway. The province let a paving contract for Highway 23 between Listowel and Teviotdale in 1933.

As the junction of two provincial highways, and the end of the county road from Elora and Alma, Teviotdale took on a new role as a stop for motorists to gas up and perhaps grab some refreshments. The Monks took advantage of the increasing flow of traffic through Teviotdale by constructing a new store and service station, complete with gas pumps.

For many old timers, Teviotdale is synonymous with the old dance hall that was a fixture for several years, and the hottest spot in north Wellington in its heyday. Before it was torn down, what had been the old Methodist Church hosted dances regularly in the 1920s.

Later, Elmer Patterson, a retired farmer, purchased land on the Maryborough side of Highway 23, and constructed a large wood arena solely for dances. In a contest, Jean Cox submitted the winning entry for a name for the nightspot: Club 23.

Later, the hall was acquired by Herb Kilty, a Palmerston butcher, and his partners, David Collins and Karl Knipe. They promoted weekly dances there in the summer months which drew crowds for miles around.

Eventually, unwelcome patrons, in the form of motorcycle gangs from Galt and London, began frequenting the dances. Their presence chased the better classes of patrons away and lowered the tone of the establishment. The trouble and occasional violence that accompanied them attracted police. The situation led to thinning crowds, and eventually the hall closed. It stood, abandoned and unused, for years, and was later demolished.

A new attraction opened in 1955. The Teviotdale Speedway, with a grandstand and a paved oval track, offered a program of stock car races every Friday evening during the summer, and special events on holiday weekends. Crowds were occasionally sparse, but Labour Day programs especially brought out spectators in droves.

The racers were a mixture of locals and out-of-town enthusiasts who worked the stock car circuit. Some of the successful locals in the 1950s were Paddy Rundle, Lyle Schmidt and Henry Gibson of Palmerston, Jerry Reever of Clifford, Jack Ziegler of Harriston, and the Cullum brothers, Sam and Bill, of Alma.

Those from a greater distance included Al Bowman of Guelph, Chuck Corrigan of Hamilton, Bill Pinder of Fergus, and Jack Borton and Wes Albright of Listowel.

A typical program consisted of five or six races, divided between A and B class cars, and sometimes a jalopy race. The program typically concluded with a 20-lap feature.

In 1955 the fancy driving was not restricted to the speedway. On June 11, two men from Guelph approached Teviotdale from Arthur. At the intersection the driver attempted to turn right to Harriston. He didn’t make it. The car demolished a checkerboard that was then at the intersection, and continued in through the lot in front of Dawson’s store.

It struck and knocked a gas pump off its mounts, then hit a parked car owned by Hugh McDougall of Alma. Two McDougall children, Heather and Rod, were in the car while their father was in the store. The Guelph car pushed the McDougall vehicle through the front of the store, causing extensive damage to the structure.

Unbelievably, there were no serious injuries, and no explosion resulted from the broken pump. Both cars were total write-offs.

The Teviotdale Speedway continued to operate until the early 1970s. By then, stock car racing had fallen into decline among both car fanatics and the general public. During the 15 years of its life, the Teviotdale Speedway was the major facility of its type in Wellington, and it deserves a full historical treatment.

The dance hall and speedway found homes at Teviotdale largely because of its key location at a major intersection. Their connection with the immediate local community was slight.

Though the economic importance of Teviotdale dwindled in the 20th century, a sense of community remained. Teviotdale had an active Women’s Institute for decades, and many agricultural organizations have formed there. As well, Teviotdale teams have long been active in baseball and hockey leagues.

Today, most people think of the famous truck stop and eatery at the mention of Teviotdale. Though the provincial highways were downloaded to the county in 1998, Teviotdale is as important as ever as a stop for motorists and long distance truckers.

*This column was originally published in the Advertiser on Oct. 10, 2003.