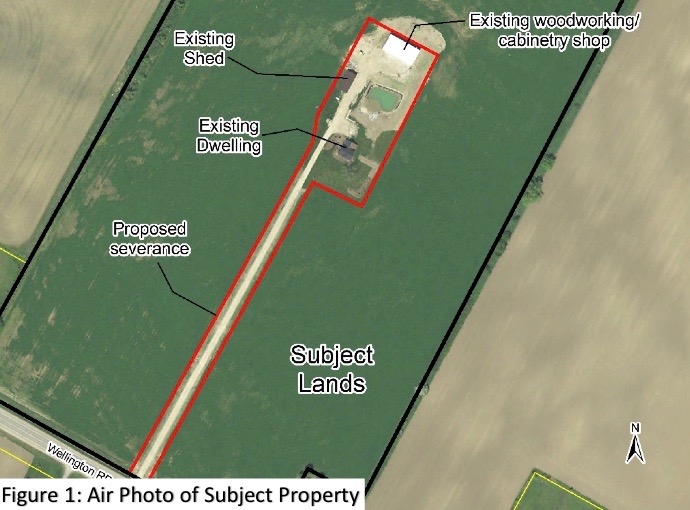 MAPLETON – Township council will consider a bylaw to rezone a property on Wellington Road 7 at its next meeting, but wants to ensure a business on a newly-created residential lot is moved within two years.

Provincial consent by the Wellington County Land Division Committee for a surplus farm dwelling severance on the property has been granted, explained county planner Matthieu Daoust in a report presented during an April 13 public meeting.

The consent will sever a one hectare (2.5 acre) parcel with an existing dwelling, shed/garage and a woodworking shop from the retained 39.4 ha (97.4ac) agricultural parcel.

The rezoning proposal would prohibit future residential development on the retained portion and recognize the existing agricultural buildings on the residential lot.

However, Daoust notes one of the retained accessory structures is being used as a commercial woodworking/kitchen cabinetry shop.

“The applicant will require additional relief to permit the business on a residential lot,” Daoust notes in the report.

“However we are not in a position to support the woodworking and cabinetry business on the residential lot,” he explained.

Daoust pointed out the use is not secondary to the agriculture use of the property as the severed lot will no longer be part of a farm.

“The official plan does outline policies for home business as well as farm business, but once again, according to provincial policy, they must be secondary to the main use of the property as a means of supplementing farm income,” Daoust continued.

“The intent of the official plan here is that these businesses are located on a farm.”

Daoust said the business proposal could not be categorized as a home industry “given, once again, that home industries do require that the business be secondary to a farm and the proposed use does not meet the minimum 25-acre lot area.”

However, Daoust said the applicant’s agent indicated “the business is looking to relocate within a two-year time line, once the financials sort of iron out.”

Neighbouring property owner Reg Samis asked “is that just going to be a guarantee that this business is going to be discontinued in two years?”

“Yes, that is the plan. Hopefully in a year or so they can get it out of there, but that is for sure that they will get it out of there in the next two years,” said Jeff Buisman of Van Harten Surveying, an agent for the applicant.

Another local resident, Brad Marquardt, expressed concerns about water control issues on the property, which he said result in flooding on his property.

“If we approve this, can it be on a condition that this water problem that Brad is indicating is resolved?” asked councillor Dennis Craven.

County manager of development planning Curtis Marshall replied, “I think it’s difficult as part of a zoning application to attach a condition.”

He added, “My question is, is it a municipal drain? … There would be mechanisms to deal with it that way.”

Councillor Paul Douglas said, “My question is how do we deal with the timing and what happens if … two years from now the business is still there?”

“We could incorporate a temporary use bylaw and include a two-year timeline,” said Daoust.

Daoust explained any future violation of conditions would be handled through the municipality’s bylaw enforcement process.

Another option for council, said Daoust, is to recognize the business as “non-compliant,” meaning it could “remain as existing and ultimately it would be left on the township on how to proceed on that front.”

Buisman said, “We think the temporary use is a good method of doing it and we’re supportive of that option.”

Council passed a motion accepting the application as information and directing planning staff to bring back a draft bylaw including a temporary use provision for the business.

Council also directed Mapleton staff to investigate potential application of the Drainage Act as a solution to the water concerns raised by Marquardt.

“I think we need to be cautions of getting involved in that,” noted Mapleton CAO Manny Baron.

“We can follow up, but it is a civil matter and likely not one that we should inject ourselves into.”

Baron added, “We can certainly answer any questions that relate to the Drainage Act and if there is a municipal drain that needs to happen we can certainly help out there.”