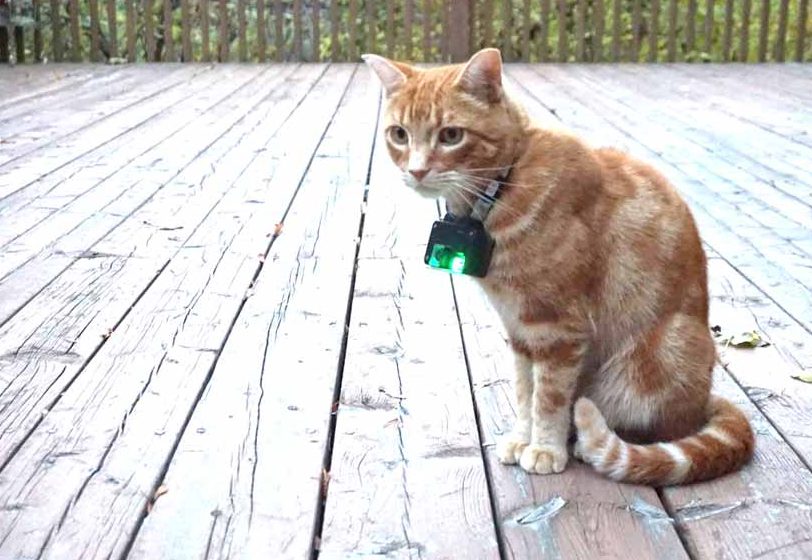 GUELPH –  Ever wonder what your cat gets up to once they disappear into the night?

Turns out you’re not alone.

Hoping to find out, University of Guelph adjunct professor and Birds Canada bird movement ecologist Elizabeth Gow is recruiting cat owners to strap cameras to their feline friends within Guelph and surrounding areas.

An ornithologist by trade, Gow is using her time with a Liber Ero fellowship at the university’s integrative biology department, in collaboration with department associate professor Ryan Norris, to study the impact of cats on local bird populations.

“In North America, we’ve seen really massive songbird declines … those are often the birds that cats are hunting, particularly birds that are close to the ground; those are our robins and our cardinals, our mourning doves and chickadees,” Gow said.

An Environment and Climate Change Canada (before known as Environment Canada) research study published in the journal of Avian Conservation and Ecology in 2013 estimates between five and 10 million of Canada’s house cats were behind the killings of between 105 to 348 million birds per year.

According to a 2017 study from the Federation of Canadian Humane Societies, an online survey of 1,222 Canadians across four days in 2017, estimates nearly 37 per cent of Canadian households owning at least one cat, accounting for a collective 9.3 million cats owned. Of those surveyed, 28% or 342 respondents, allowed their cats outdoors unsupervised.

“In the city for instance you may have robins that these cats are hunting and it may create what we call a ‘sink’ — so it’s sort of an environment where the robin population can only persist by birds coming in from outside areas.”

Gow, who save for allergies, has no ill feelings toward felines, says we don’t really understand exact numbers for how many animals are being hunted or captured by cats — limited by only seeing what they bring back or eat.

Strapping cameras on cats is nothing new.

A similar study using Gow’s camera technique is also being run in Gatineau, Quebec; GPS and camera tracking studies have also been conducted in the United States, United Kingdom, Australia and New Zealand; and National Geographic has attached their “Crittercam” to a variety of animals.

“We know what they’re doing in other countries, but what are they actually doing here in our backyards?” Gow wondered.

A pilot catcam project was run by Gow in 2019 between August and October testing out an earlier version of the catcams.

But funding from a variety of sources has allowed Gow to take the project further with 15 cameras currently out in the community.

Weighing around 70 grams, a night vision and GPS-equipped camera sits below a cat’s chin. An accelerometer in the camera detects when the wearer is padding about the neighbourhood, causing the camera to snap photos every few seconds.

The cameras stay with their subject for five weeks before being returned.

Photos are then downloaded and blended into a video ranging between 50 and 200 hours, depending on the cat.

Hired graduate and research students note everything a cat has done and for how long — from walking down a roadway, to a game of cat and mouse.

Photos from the 2019 trial period revealed cats travelling upward of one kilometre away from home, capturing mice, shrews, voles, chipmunks, frogs and insects — to name some of their loot.

“The cats are just engaging what’s kind of natural to them, they’re very curious and instinctive — something moves by them, they want to kind of hunt it or chase it,” Gow said.

The cats we have in our homes, Gow explained, are very much related to their ancestral African wildcats having only begun the process of domestication within the last 10,000 years after interacting with the Egyptians and agriculture.

“They have these wild characteristics where cats have had to persist and feed themselves,” Gow said, mentioning they’re one of the only domesticated animals that can live entirely away from humans.

General consensus is, it’s best for cats to remain indoors.

But Gow points out there are some who believe cats should be allowed to roam free and satiate their wild side.

“It’s very hard if you have a cat, but it has [spent] its whole life outside, to try to transition it indoors,” Gow said.

She hopes by finding out what cats really get up to outdoors will allow her to work with cat owners to find ways to emulate outdoor activity within the safety of home.

“It’s kind of this whole encompassing thing of what’s good for cats is also good for birds,” she said.

The first cameras will soon be returned, now four weeks into the first five-week round of cat subjects, before heading back out on another group of 15.

Over 200 people who have filled out the catcam project’s online survey are qualified to participate but the researchers are still seeking more participants within a 40 minute drive of Guelph.

“We’re really looking right now for cats that people own that they physically put outside, so these are cats that don’t have a cat door,” Gow specified.

As an incentive, participants are provided with a highlight reel of their cat’s activities to discover who their cat really is when the lights go out.

“I think people are just fascinated with their pets,” Gow said when asked what makes us so intrigued by our whiskered friends.

“People really just are interested in helping science and they also are very curious.”