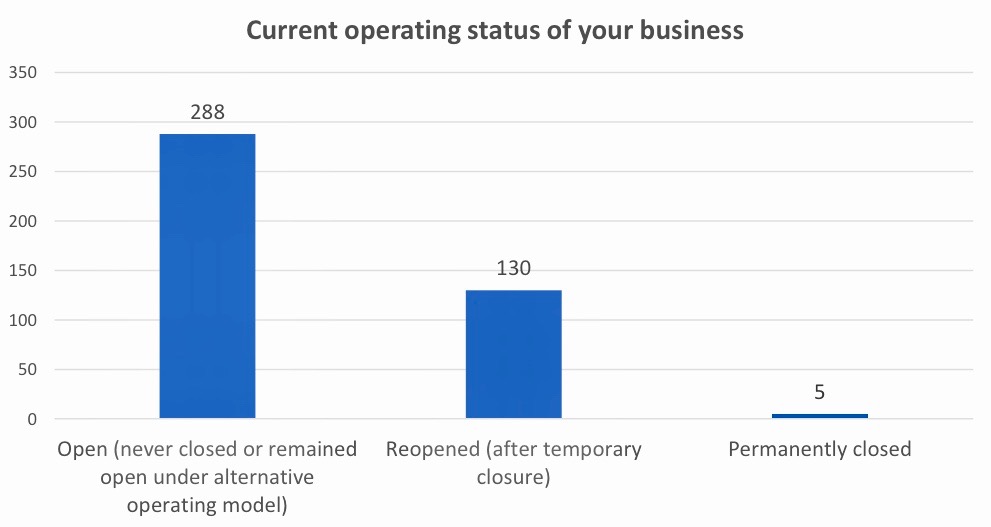 Roughly 68 per cent of respondents to a Wellington County business retention and expansion recovery survey indicated they have operated continuously, in some fashion, throughout the COVID-19 pandemic. (County of Wellington agenda image)

WELLINGTON COUNTY – A county-wide survey indicates about 68 per cent of businesses have operated continuously throughout the COVID-19 pandemic, while close to 31% re-opened after a temporary closure and just over 1% shut down permanently.

The business retention and expansion recovery survey, conducted by county staff with member municipalities and the Ministry of Agriculture, Food and Rural Affairs, from Nov. 12 to Dec. 14, drew 435 responses from county businesses.

Of 423 responses to a question on the current status of their business, 288 indicated they never closed, or remained open under alternative operating models, such as restaurants moving to takeout only.

Another 130 indicated they have reopened after closing temporarily at some point. Five respondents reported their businesses closed permanently.

The study also shows about 60% of respondents are operating at at least 75% of maximum capacity.

Of businesses responding to the survey:

A staff report from county economic development director Crystal Ellis presented to county council at the Jan. 28 meeting indicated further meetings are planned to “verify actions that can be taken related to business retention and expansion.”

The goal, Ellis notes, is to establish a program to move forward with the county’s $200,000 budget commitment to develop a business expansion, retention and recovery program.

”It was amazing to see some of the things that came out of the report,” said economic development committee chair councillor George Bridge.

“Some of our businesses are doing really well and some aren’t.”

He added, “We’re looking forward to taking that $200,000 that was put in our budget to see what we can do with a recovery plan going forward.”

Councillor Doug Breen commended the committee for its efforts on behalf of local businesses and noted many were able to take advantage of the county’s previous $1 million Keep Well business support program.

“The last 10 months has been really, really hard on a lot of business … and I appreciate everything the committee has done to try to support those businesses,” said Breen.

He explained, “They find them pretty daunting and what I really liked about what we were able to do through the county is it was pretty simple, it was pretty straightforward, it didn’t require an auditor and three tax accountants to be able to figure out whether you would qualify or not.

“So hat’s off to the job that was done there, but we do need to keep encouraging these people because they’re a long way from out of the woods. There’s a lot of business that are still failing.”

The program will provide businesses with funding to a maximum of $20,000 to help cover decreased revenue expected as a result of the province-wide shutdown.