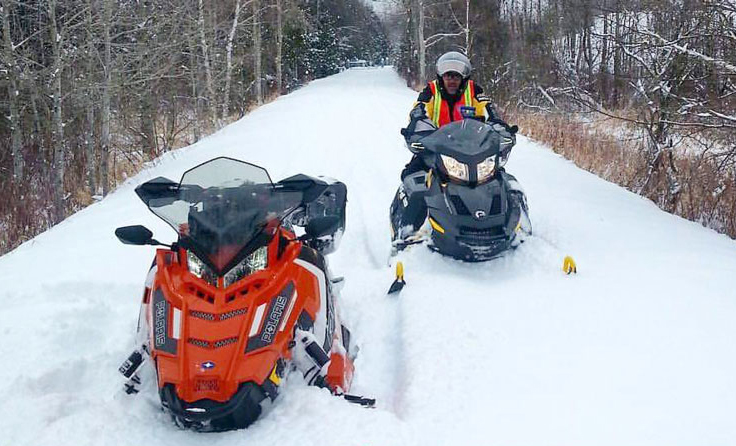 WELLINGTON COUNTY –  Snowmobilers will not be able to use trails owned by the Grand River Conservation Area (GRCA) this season due to liability concerns.

Without going into details of the dispute, representatives from the GRCA and the OFSC confirmed changes to clauses from previous agreements created the issue.

About 250km of trails are impacted by the disagreement.

“The OFSC annually provides insurance for track protection to address the needs of most of our landowners,” District 9 manager Karen Buratynski told the Advertiser.

“There have been situations, and the GRCA is one of those situations unfortunately this year, where those landowners have requested coverage outside of activities and risks that is related to snowmobile operations.”

On the advice of its insurer, OFSC District 9 approached the GRCA in September “because there had been clauses in the previous agreement that we were not covered for and we cannot insure anything outside of normal snowmobile activity; we cannot ensure any other users,” Buratynski said.

“We have had long-standing agreements with the snowmobile clubs … which basically outline the provisions for the use of specific GRCA lands for the activity of snowmobiling,” Stocco told the Advertiser.

“And they requested a number of changes to those agreements, which we were unable to make.”

Thus the agreement expired in November.

For the Hillsburgh Snow Roamers, losing access to the Elora Cataract Trailway – jointly owned and operated by Credit Valley Conservation (CVC) and the GRCA – has left major disconnects between its smaller trails.

“More than a quarter of our trails now we won’t have access to.”

The majority of the 95km of trails the Hillsburgh Snow Roamers have traditionally maintained and groomed runs through farms and other private property adjacent to the Elora Cataract Trailway and further afield.

“Those trails now are going to be very difficult to access because the majority of them, the way you normally would get onto those trails is by using the Elora Cataract Trailway or the GRCA or the CVC trails,” Tureski said.

Preventing access to snowmobilers will also likely impact tourism in the area.

Buratynski confirmed tourism will be impacted in areas around Belwood, Fergus and Conestogo Lake.

CVC corporate services director Jeff Payne recently told Erin council it will have major impact for the town as well.

“We’re looking at what options are possible, but the insurance piece will have to be sorted out …” Payne said on Dec. 17.

Councillor Rob Smith said he is concerned because snowmobile use on the Elora Cataract Trailway is a valuable tourism attraction for Erin.

Tureski agreed, noting the trail attracts people from the GTA.

“It’s also going to have an impact on people that come from Mississauga or Oakville or Brampton or other places for a day of snowmobiling,” he said.

Those who use the GRCA trails this winter will also notice a difference.

“Because this is a multi-use trail … there’s a tremendous amount of people that ride their horses, walk their dogs, go for hikes … they won’t have access to the trail this year, or it’ll be very difficult, because when we plow the snowmobile trail and groom [it] we flatten it and it’s nice and smooth and clear of debris,” said Tureski.

“That would be like walking (on) an unplowed road.”

Currently members of the local snowmobiling clubs are approaching other private landowners to try to make up the loss of GRCA-owned trails.

“In an already very busy time of year, our club volunteers are now tasked with going out looking at the trail system, dismantling anything that may currently be on GRCA property … and building and maintaining trails to provide our riders with as much riding opportunity as they possibly can this year,” Buratynski said.

“It’s certainly not something that we want to say   – the partnership is over … hopefully by next November we will be able to come to an agreement which will be mutually beneficial for both the snowmobilers and GRCA.”

Buratynski thanked all snowmobile club volunteers for their efforts.

Once alternative trails are secured, they will be posted on the OFSC interactive trail guide at www.OFSC.on.ca. Those updates will also appear on the Go Snowmobiling  Ontario app.