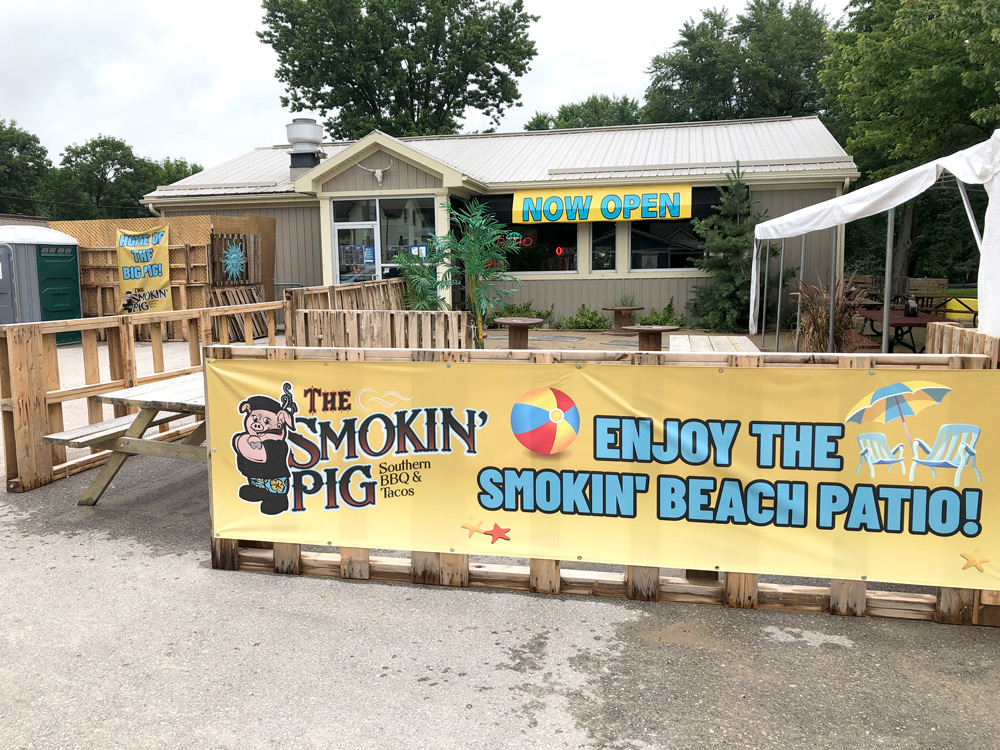 Graham, a West Grey native, has been back in the area for about two and a half years after travelling across Canada and the U.S.

While driving past the soon-to-be Smokin Pig restaurant location, which had been empty since Jemstones Bar and Grill closed due to COVID-19, Graham knew she wanted to start a restaurant, as it “just felt right.”

Graham took possession of the Smokin Pig restaurant on April 1 and hoped to open for the May 24 weekend. Unfortunately, due to COVID-19 regulations, this was not possible.

On June 4 the restaurant started accepting takeout orders, but Graham admitted at the time this isn’t the intention for the restaurant, as the goal is for it to be a lively in-person venue offering “everything that people missed.”

The restaurant features a sand floor patio, to resemble the beach and provide a retreat from COVID-19.

“We’re just trying to give them the feel of the ocean,” she noted.

The restaurant was busy through the June 4 opening, Graham said, and with patio service allowed since June 11, its busier than ever.

Ontario is set to allow indoor dining at restaurants on July 16.

The Smokin’ Pig is preparing to allow indoor seating. The restaurant will open a few tables inside, as well as the bar, patio, and will be continuing to offer takeout.

“It’s so interesting,” Graham said of the changes to the restaurant industry.

She added that with the public so used to takeout now, businesses feel increased pressure to keep that going and have menus that accommodate, as some foods hold up better than others after long drives.

Graham is considering updating the menu in order to be more takeout friendly.

She added many restaurants are facing a shortage of staff as they try to prepare for reopenings.

She detailed the Smokin’ Pig’s own efforts to recruit more staff, noting it’s been hectic.

“I’m proud of my staff,” Graham said, noting her employees’ ability to adapt to the changes.

Graham emphasized that patrons exercising patience with restaurant workers is much appreciated, as everyone is adjusting to the new protocols. She noted there are pros and cons to opening in such a hectic time.

On the pro side, many people are ecstatic to get back to restaurants, and are using them as a venue for reunions with friends or to go on dates.

“That’s the phenomenal part of it,” explained Graham.

On the flip side, the uncertainties of the pandemic can lead to some people being upset and angry.

“They want (to go) out so badly and they don’t want to be disappointed,” said Graham.

She emphasized the Smokin’ Pig is a brand-new restaurant, which comes with a bit of a learning curve, particularly the training of new staff.

“We’re in training mode,” she said.

Overall, the experience has been great, but it’s still new, only having been open for a few weeks, Graham noted.