Program anniversary - The Wellington Rural Water Quality Program celebrated its 20th anniversary with a tour of some of the farms it has assisted over the last two decades. ABOVE: Participants on the tour stand on a stream culvert the program helped pay for to prevent flooding. Photos by Aryn Strickland

MAPLETON – The Wellington Rural Water Quality Program (WRWQP) marked its 20th anniversary on June 26 with a tour of projects in the Township of Mapleton.

The program provides  grants and technical assistance for farmers and rural property owners to improve water quality in the area’s connecting watersheds.

Since 1999, the program has provided a total of $9.1 million in grants to Wellington County landowners to support the completion of 2,974 projects, including:

– establishing 202km of windbreaks and 67km of stream buffers;

The Grand River Conservation Authority administers the program on behalf of Wellington County.

Most of the money for the WRWQP comes from municipal governments.

“Farmers want help with projects that assist in the betterment of the farm,” explained conservation specialist Anne Loeffler.

“In this program we help projects that benefit people living down stream. Mapleton Township has the greatest number of WRWQP-assisted projects in the county.

Starting outside of Alma and ending near Wallenstein, Loeffler told a bus load of attendees the tour would “provide a visual impression of what we have achieved over the last 20 years.”

Attendees on the tour included representatives of other conservation authorities, municipal staff and farmers.

The first stop was Mark and Rosena Martin’s farm on Sideroad 18.

Soon after taking over the property 22 years ago, the Martins found they needed to replace a culvert that was allowing a stream to flood a portion of the property. Funding through the WRWQP helped pay for a new $20,000 culvert.

More recently, the Martins have received funding from WRWQP for cover crops. 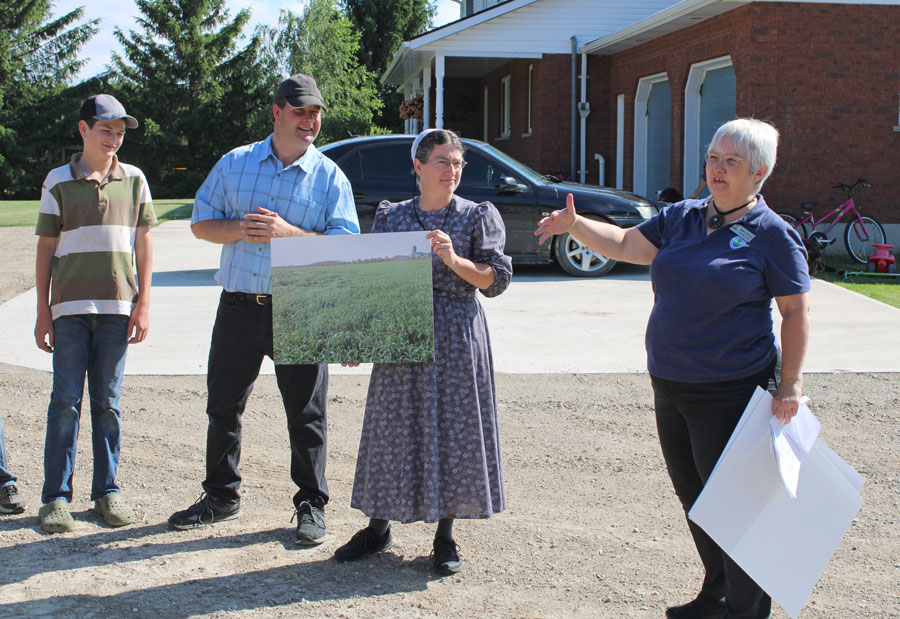 Mark commended Loeffler and the program for making themselves known in the community, saying, “The trend is new modern technology and that has its place, but person-to-person connection is really important.”

The final stop was the edge of a creek from the lower Conestogo River on a private property in Wallenstein.

Here Loeffler explained how the WRWQP helped the landowners plant trees to make a buffer to stabilize the creek.

Ahead of the anniversary, program officials received a request from Waterloo asking for an inventory of its projects along the lower Conestogo River area.

Through the inventory, Loeffler said officials found 96 per cent of the projects the program assisted 20 years ago are still standing or being utilized to their original purpose.

However, the program also has room for improvement, she noted.

Among the nutrient replacement projects (like cover crops) the program assisted with over the same time span, only 35% were still being utilized.

Overall, Loeffler said, “We have made great changes to the landscape,” with the support of local farmers and municipalities.

She concluded, “It’s been a wonderful 20 years and we are looking forward to many more.”