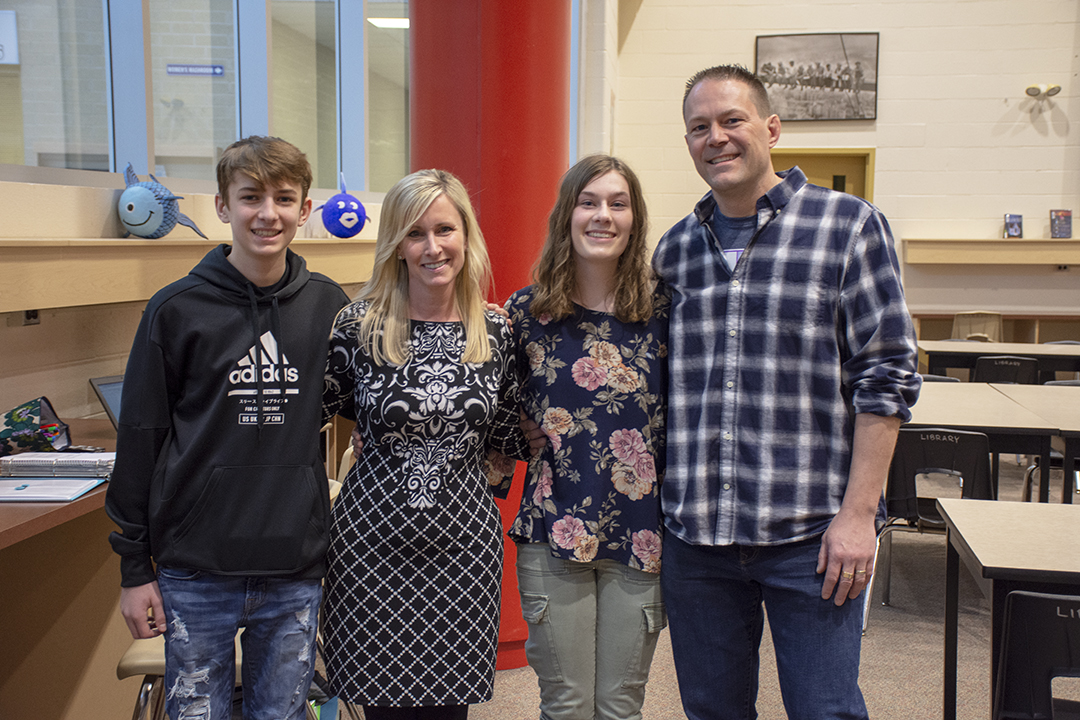 FERGUS – “Jade Ritter is one of a kind. Jade is memorable and, I believe, she will make a significant contribution to our world.”

On April 17, Ritter was surprised to learn in the high school’s library that she’d won the award.

“That’s amazing,” Ritter said after Centre Wellington Mayor Kelly Linton told her about the award. “A big surprise and a really big honour.”

Linton offered his congratulations, stating, “I know everybody around you are pretty proud of you for sure.”

“I’ve seen you at school over the years,” he said. “It’s great to see you grow and progress – and congratulations on this recognition.”

“Jade does not see herself as accomplished or outstanding or special, but I see her this way,” McCracken wrote. “Jade’s core motivation is selflessness …

“She is indeed a role model, not only for her peers, but also for staff and community members.”

Ritter is involved in various aspects of her school and the community.

Ritter said she volunteers “just because I genuinely love the area that we live in and … it just makes me feel really happy to be able to do something to give back for others.

“I think I’ve learned a lot of valuable skills from that, so to be recognized for something with that it’s … an honour to see that people kind of appreciate my efforts.”

In school Jade has participated in the DECA businesses competition, Skills Canada competitions, the drama club and various other volunteer positions.

“Additionally, in defeat she is poised and quietly and thoughtfully receives constructive feedback, respecting judges’ and teachers’ suggestions and always working to improve herself,” said nominating teacher Carly McFarlane, who also called Ritter an “everyday hero.”

Next year Ritter will attend Western University for nursing and she plans to get involved with different clubs and councils within the university. However, she is also planning on remaining involved with the Fergus Fall Fair.

She is currently the Fergus Fall Fair Ambassador and was previously the Wellington County Princess of the Furrow.

“The fair, growing up, that’s been a big part of my childhood and something I really enjoyed and I know just being part of the ambassador program, that has really helped me develop confidence and further public speaking skills,” Ritter said.

“So I think that just being able to stay involved with not only the fair but the ambassador program itself is something I definitely want to do.”

Another nominating teacher, Laura Griffin, said Jade’s commitment to agriculture has benefited the community in a number of ways.

“She was fully committed to both positions (Fergus Fall Fair Ambassador and Princess of the Furrow) and subsequently, Jade has an authentic passion for agricultural involvement with many people, both at Centre Wellington District High School and throughout the community,” Griffin stated.

She also mentioned Ritter’s job in the page program at the Wellington County Library.

“She manages her time spent on extracurricular activities as well as her academics in order to work,” Griffin said.

Ritter’s mom, Jenny Ritter, said her daughter is so involved in the community because she genuinely wants to be involved.

“She just has been driven … especially … by agriculture and community and she just loves where she lives,” Jenny said.

Ritter has left an impression on CWDHS.

“Now in my 29th year of teaching, I can say with confidence that I have encountered very few, if any, as dedicated and accomplished as is Jade,” said another nominator from the high school, Tim McDonald.

“While her academic prowess is exceptional, her work ethic second to none and her serene approach to leadership a model for others to emulate, it is the way in which she is able to excel while maintaining a sense of humility and genuine concern for others that never ceases to impress me.”

Ritter will receive her award at the Centre Wellington Chamber of Commerce Awards of Excellence Gala on May 14.