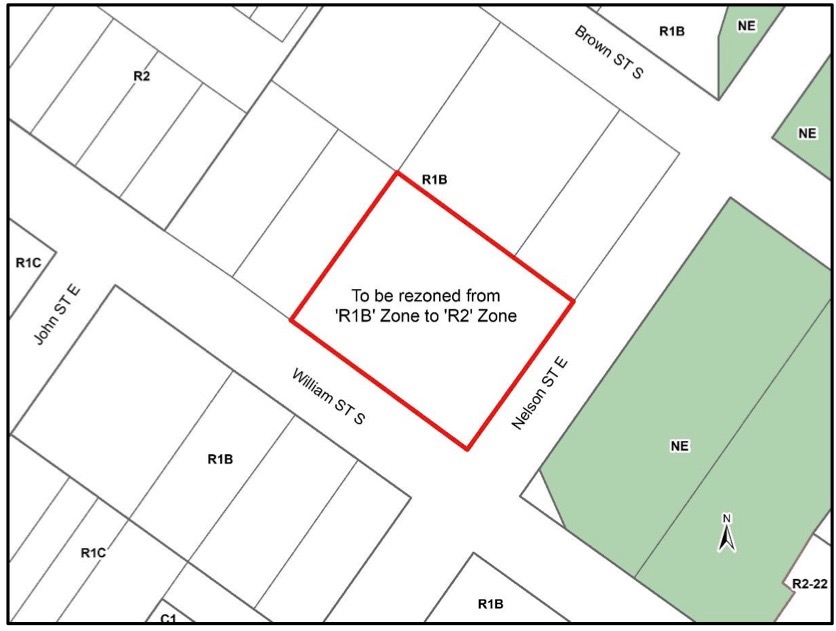 This property, at the corner of William and Nelson streets in Clifford, is expected to be rezoned later this month to permit the construction of two semi-detached residential dwellings (four units total) and one single-detached home. Minto council image

MINTO – A bylaw to rezone a three-quarter acre parcel of land in Clifford to permit the construction of two semi-detached residential dwellings (four units total) and one single-detached home has received first and second reading by Minto council.

The bylaw was considered on April 6 following a public meeting on the proposed zoning change on the vacant property, located at 21 William Street South.

“The application is before council simply because the R1B zoning does not permit semi-detached dwellings,” said Wellington County planner Matthieu Daoust.

“All in all the application generally conforms to the zoning bylaw, as well as the official plan and provincial policy and planning staff have no concerns.”

Minto planning technician Ashley Sawyer noted the applicant, Allen Williamson, is not seeking any specialized zoning relief and is “intending to comply with all the zoning provisions of R2.

“Saugeen Valley (Conservation Authority) has indicated they have no concerns with this development, as has the town,” said Sawyer.

“I think it’s important to note that new housing types are needed to support a more attainable housing supply, especially in today’s market and the official plan of the county recognizes that semi-detached homes help respond to this need.”

Yvonne asked council to address speeding issues in that area of town and also noted concerns about overcrowding and loss of trees in the village.

“Would it be possible to require owners/developers to plant trees on properties in town that they develop?” she asked.

“We notice in the areas where new houses are built there is a lack of trees. With the concern regarding climate change, it seems counter-productive to keep cutting down and not replacing trees which have a beneficial effect on our air quality.”

She added, “A lesson learned from this pandemic: putting too many people in too small a space makes it difficult to control virus/disease. Something to consider when doing town planning.”

Sawyer said she had spoken to both Houssers about their concerns.

“I would say they were more inquiries about setbacks, lot sizes all that kind of stuff, but they did have some concerns about grading and drainage. So I did let them know that will all be reviewed by our engineer prior to any building permits being issued,” Sawyer explained.

“But they have indicated they would like to be kept in the loop, which we will do.”

“I’m really pleased. This is a lot that’s been sitting there for a while and I always thought it would be a great infill lot … I think this really adds value to the community. So thanks very much for investing,” said Bridge.

Final reading of the bylaw is slated for the April 20 council meeting.